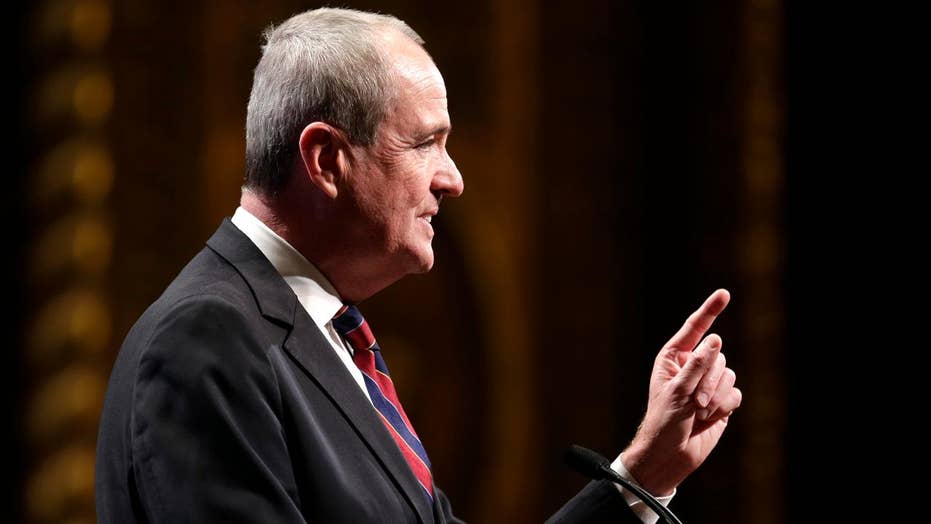 FBN’s Charles Payne, a New Jersey resident, reacts to Mayor Phil Murphy’s proposal of a millionaires tax during his inauguration.

His constituents are complaining about the state's crumbling transit system. His own party wants to strip him of gubernatorial powers. The soccer team he owns is living in dire conditions, and one of his sons has been in trouble with the law.

What's a newly elected governor with no experience in elected office to do? He takes a vacation far, far away.

New Jersey Gov. Phil Murphy raised eyebrows last week as he embarked on a swanky 11-day trip to Italy, where he owns a $7 million home he bought during his 23-year stint at Goldman Sachs.

The governor’s office initially declined the reveal where Murphy was going for his holiday, but NJ.com solved the mystery and reported that Italy was the destination. The state’s taxpayers will pick up the tab for protecting the governor while he’s on vacation, with the tab reaching as much as $100,000.

Trouble is, when Murphy returns, New Jersey's problems will still be there waiting for him. Here's a look at some of them.

Despite the governor’s promises in February to ease overcrowding and service issues on New Jersey’s transit system by adding extra rail cars, commuters are complaining that not much progress has been made to actually alleviate the problem.

The plan to add new cars was short-lived. New Jersey leased 10 rail cars from the Maryland Transit Administration to alleviate the overcrowding, but returned them just eight weeks later when the lease ended.

"If my Uber bill this summer is any measure of success, improvement would not be the term I would use."

“What relief plans? I haven't seen any relief,” one commuter told NJ.com.

“If my Uber bill this summer is any measure of success, improvement would not be the term I would use,” commuter Niklaus Gunter seconded. (Users of NJ Transit often wind up paying for cab or Uber/Lyft rides when their trains and buses fail to show up as scheduled.)

For what it's worth, the NJ Tranist system appears to continue to crumble, with nearly a dozen trains getting canceled on Tuesday morning alone, infuriating commuters. NJ Transit at first offered no explanation, but later vaguely said the installation and testing of a rail safety system called Positive Train Control (PTC) and lack of staff were the reasons for cancellations.

“NJ Transit has taken steps to address these issues by recruiting and training additional locomotive engineers. We anticipate a class graduating within the next couple of weeks that will add nine engineers to the roster,” the statement from NJ Transit reads.

“In addition, we have increased the number of current classes from two to four, running concurrently with staggered graduation dates, to continue the qualification of new engineers,” it added.

The New Jersey governor’s struggles to solve issues may also embolden already existing calls from within his own party to strip him of powers when it comes to deciding how much money various taxes and programs should raise each year, NorthJersey.com reported.

The power to set revenue estimates is crucial as it determines how much the state will need to hike taxes to fund spending priorities. Democrats suggest the role should be shifted to a three-member panel consisting of experts, a move that they say would take politics out of budget calculations and increase transparency.

But Murphy has fought back against the proposal, saying it would upset the balance of power between him and the legislative branch of the state government.

“New Jersey’s Constitution carefully divides the authority in the budgetary process between the Legislature, who has the power to appropriate funds, and the Executive, who has the authority to certify revenues,” Murphy spokesman Dan Bryan said in a statement to the outlet.

“Unlike his predecessor, Governor Murphy is committed to certifying revenues that are realistic, responsible, and sustainable, and feels that it is unwise to disrupt the separation of powers that has existed in this area for over 70 years.”

"Some players were forced to live with an elderly man who repeatedly made inappropriate comments to the players and made them feel uncomfortable."

Carli Lloyd, a star on the U.S. women's national soccer team, is among the players on Phil Murphy's sad-sack Sky Blue FC club.

The governor bought the team a decade ago as a way to impress his daughter. According to NJTV, he “has invested hundreds of thousands of dollars in this losing proposition” just so “his daughter, who plays soccer, could see that women can play soccer at the professional level as well.”

But the club’s training facilities lacked locker rooms or even running water, the Equalizer reported. The players have had to use portable restrooms and have worn dirty gear during practices because there are barely any laundry services.

Another report, published by the soccer news site Once A Metro, detailed the mismanagement of the team and how little interest Murphy actually has taken in it, though it has cost him nearly half a million dollars in recent years.

The report alleges the club failed to provide decent housing for some players, forcing them to sleep on couches, and use sheets of cardboard to cover broken windows. The Equalizer reported as well that “some players were forced to live with an elderly man who repeatedly made inappropriate comments to the players and made them feel uncomfortable.”

Murphy admitted that the conditions weren't acceptable and said the team deserved better treatment. “I don't find the status quo tolerable — and these players deserve better,” he said in a statement, according to NorthJersey.com. “They deserve to operate in a professional and supportive environment so they can do what they do best — play the game, inspire fans, and build community through the power of the world's most popular sport.”

But Murphy's rough six-month reign as governor isn’t his only headache. His 20-year-old son, Joshua Murphy, who relentlessly campaigned for him during the 2017 election, had multiple run-ins with the law since Murphy’s rise to prominence.

In June, prosecutors dismissed a complaint concerning the governor’s son, NJ.com reported. He faced charges of underage drinking and disorderly conduct as he allegedly shouted obscenities at a campus police officer on Halloween as he was partying with two young women. According to police, Joshua Murphy ended the night on the ground in handcuffs.

In February, the son drove off a steep slope in Connecticut, the outlet reported, citing police records. His SUV was found by a motorist. According to police reports, Murphy said he crashed the car at early morning and he was unable to contact anyone for help because his phone didn’t work after the crash.

The governor and his wife lashed out against the media for reporting about his son’s endeavors, saying Joshua “has been living a nightmare” thanks to media inquiries.