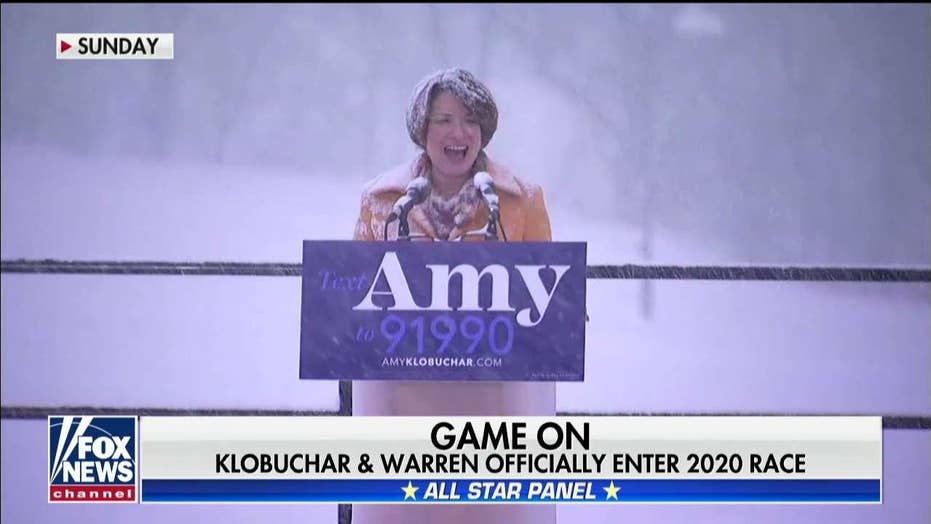 Democratic presidential candidate Sen. Amy Klobuchar spent the weekend attempting to diffuse the controversy surrounding multiple reports that she has mistreated her staff on Capitol Hill.

The Minnesota lawmaker, who announced her candidacy on Feb. 10, said in a statement to the Star Tribune newspaper that she promises to “do better” following reports in multiple news sources that, in the past, she insulted her staff, made them run personal errands and has even thrown objects in anger.

“I’m incredibly proud of the work our staff has done and I would not be here without amazing staff,” Klobuchar told the Star Tribune in a statement. “I know I can be tough, I know I can push people too hard, and I also know I can do better — and I will.”

Klobuchar, who had the highest staff turnover rate of any senator between 2001 and 2016, has previously admitted to being a tough boss, but said it’s because she has high expectations of herself as well.

"Am I a tough boss, sometimes? Yes. Have I pushed people too hard? Yes,” she said, according to Politico. “But I have kept expectations for myself very high. Undertaking a presidential campaign, that’s a pretty good way to judge people in how they manage something.”

Some former staffers described Klobuchar as “habitually demeaning and prone to bursts of cruelty,” although others said that working for Klobuchar was challenging, but rewarding.

“The best way I can describe it is sort of like Navy SEALs training. It’s not intended to be fun. It’s hard. But what you get from it is you become very, very good at what you do,” said Zach Rodvold, who worked on Klobuchar’s staff during her first Senate run in 2006.

On Saturday night, Klobuchar once again addressed the controversy – albeit in a more comical way – when speaking to a crowd gathered at the annual Gridiron Club dinner.

Klobuchar said: “When Jerry [Seib, executive Washington editor of the Wall Street Journal and Gridiron Club president] called about tonight he asked, 'Do you need a microphone or do you just prefer to yell at everyone?' I said, 'microphone.'"

The Minnesota Democrat is one of a slew of Democratic candidates – and one of six senators -- to announce a bid for president or the formation of an exploratory committee. Klobuchar’s announcement in February came a day after Sen. Elizabeth Warren, D-Mass., officially launched her presidential campaign.

Klobuchar, 58, is hoping to belay her success in her home state – she easily won a third term last year and has enjoyed broad support from voters in urban, suburban and rural areas, including in dozens of counties Trump won in 2016 – and her reputation as a straight-shooting pragmatist who gets legislation passed onto the national stage.

Klobuchar's focus in recent months has included prescription drug prices, a new farm bill and election security. She supported the "Green New Deal," a Democratic plan proposed this past week to combat climate change and create thousands of jobs in renewable energy.

However, her legislative record has drawn criticism from both the GOP and some fellow Democrats. Some Republicans said Klobuchar has been able to get things done by pushing smaller issues. Some progressives said she'd lacked the kind of fire and bold ideas needed to bring significant change and excite voters.

While Klobuchar has positioned herself as the only Democratic candidate able to win back other Midwestern states such as Michigan and Wisconsin, which were reliably Democratic in presidential races for decades until Trump's victory over Hillary Clinton, that could change as more candidates enter the fold.

Sen. Sherrod Brown of Ohio has been visiting early-voting states and is rumored to be considering a run and Pete Buttigieg, the mayor of South Bend, Indiana, established an exploratory committee last month. There is also widespread speculation that former Vice President Joe Biden could enter the field.