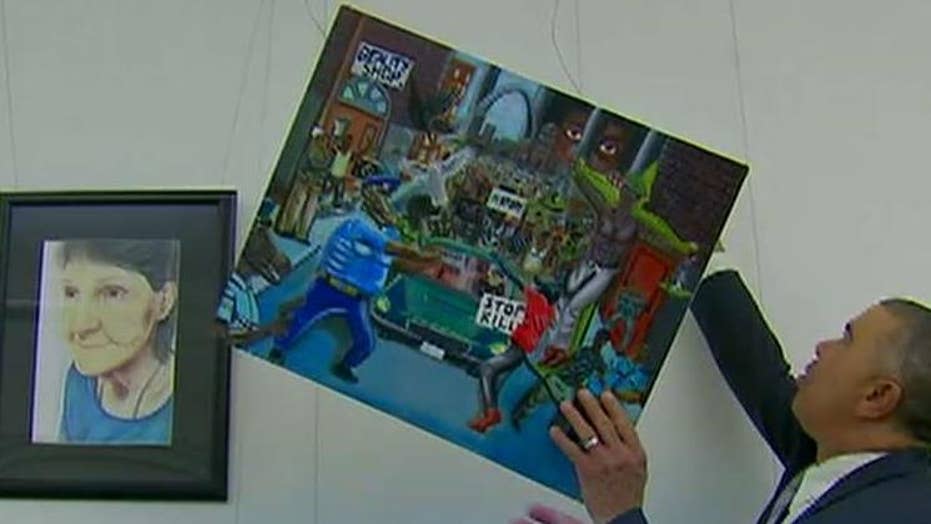 There was Pussy Riot, the female punk music act jailed by Russian President Vladimir Putin and condemned as sacrilegious by the Russian Orthodox Church after an unauthorized performance inside a Moscow cathedral.

A debate over where to display Guernica raged since Picasso completed the work. A tour of the painting helped raise money to recover from the war. While at the Museum of Modern Art in New York, anti-Vietnam war protesters often rallied in front of the painting. A 1974 protest of the My Lai massacre scarred Guernica with spray paint.

Picasso himself refused to allow Guernica to return to Spain until Francisco Franco was out of power. When it finally returned to Spain, officials shielded Guernica behind bomb-proof glass. Picasso wanted Guernica shown only at the Museo del Prado, in Madrid. But it’s now on display at the Reina Sofia. Now Basque nationalists demand it be on display in Bilbao.

Norman Rockwell’s “The Problem We All Live With” shows U.S. marshals escorting 6-year-old, African American student Ruby Bridges to an all-white school during the 1960 New Orleans desegregation crisis. Rockwell painted racial epithets on the wall behind the child and the carcass of a splattered tomato.

Now there is “Untitled #1” by teenage artist David Pulphus. It shows marchers descending on police officers with the St. Louis Arch in the background. Pulphus draws police as warthogs -- with weapons drawn. A protester is cast as a wolf.

For now the painting hangs in a tunnel linking the U.S. Capitol with the Cannon House Office Building. But on Tuesday, the architect of the Capitol plans to remove the painting.

Washington GOP Rep. Dave Reichert,  the former sheriff of the state’s King County, demanded that Architect of the Capitol Stephen Ayers remove the painting. He argued the painting “is in clear violation of the Suitability Guidelines outlined in the official rules for the competition.”

In particular, Reichert asserted the rules bar art that depicts “subjects of contemporary political controversy or a sensationalistic or gruesome nature.”

Clay says removing the painting is a problem because a board that picks paintings for the competition approved it long ago. Never mind that Untitled #1 hung in the tunnel for seven months without anyone paying it much mind.

“These rules exist for a reason,” Reichert said. “This painting hung in clear defiance to those rules and was a slap in the face to the countless men and women who put their lives on the line everyday on behalf of our safety and freedom.”

But the paint is in violation of the competition rules. So, Untitled #1 will come down.

But do other paintings displayed in that corridor also comply with those rules?

A painting titled “POTUS” showing President Obama in a cubist style by Robert Mason Jr. is on display from the district of Rep. Maxine Waters, D-Calif.

Surely there are no political controversies surrounding the current President of the United States.

How about a photo of a haggard U.S. veteran, titled “Veteran,” by Cain Nocera, from the district of Illinois Democratic Rep. Dan Lipinski. No controversies of late with the Department of Veterans Affairs.

“Welcome Home” is a painting by Sydni VanHoose, from the district of Rep. Vicky Hartzler, R-Missouri.

The drawing is of a male solider in camouflage clutching a young girl who clings to his neck. The girl waves a United States flag. No controversies in recent years about the length of deployments of U.S. service personnel in Afghanistan and Iraq.

Nearby in the tunnel, a large sign trumpets the merits of the competition.

“An Artistic Discovery” shouts the placard. “Encouraging the Creative Endeavors of our Nation’s Young Artists.”

Before the architect of the Capitol decided to remove the painting, Reichert engaged in a dialogue to “de-escalate” the situation with Clay.

Reichert says he suggested to Clay that Pulphus submit another painting to “replace the negative view (of police) with a more positive piece to show progress. We’re working together.”

Reichert said he feared that continuing to display the painting “could result in the death of another police officer.”

Part of the historic controversy over Guernica is where it’s shown. And that’s the issue here, too. Those who want it down say go hang it in a gallery somewhere, just not on Capitol grounds. Beginning last week, Untitled #1 wasn’t the only art in question in the Cannon Tunnel.

Lawmakers assumed thespian roles acting out an unscripted drama with the painting playing a central role. One could best characterize this part of the saga as “performance art.”

It started when Rep. Duncan Hunter Jr., R-Calif., took it upon himself to unilaterally yank the painting off the wall and deliver it to Clay’s office.

“He has no authority to do that,” Clay protested.

When asked whether lawmakers could in turn pull down the student painting of an American eagle representing his district, Hunter replied “nothing prevents that.”

On Tuesday morning, Clay and members of the Congressional Black Caucus huddled in the tunnel to rehang Untitled #1.

“Hunter’s removal of this art showed a disregard for the Constitution,” protested CBC member and North Carolina Democratic Rep. Alma Adams, an artist and art professor.

By afternoon, Rep. Doug Lamborn, R-Colo., strolled through the passageway, pulled down the painting and deposited it at Clay’s office.

“I could not in good conscience continue to walk by a painting that so flagrantly disrespected the brave police officers that protect us in the Capitol,” he said.

Clay brought the painting back an hour later.

“If they have an objection to a picture, they should go through a procedure and get it removed,” Clay complained. “Don’t arbitrarily take the kid’s picture down, OK?”

Two hours later, GOP Reps. Dana Rohrabacher, Calif., and Brian Babin, Texas, conducted a joint heist of the art and walked the painting over to Clay’s office, members of the press in tow.

An hour later, Clay re-hung the painting in the hall for a third time.

“I’m getting a little dizzy coming back here,” complained Clay, also saying the e GOP stunts were “childish” and “adverse to civility.”

On Wednesday, someone Scotch-taped a paper “Blue Lives Matter” flag above Untitled #1. Such flags look just like the U.S. flag -- substituting a “thin, blue line” for the red stripe that runs immediately below the field of 50 stars.

The Congressional Art competition rules are silent as to whether such guerilla commentary is allowed to accompany the works on display. It’s unclear whether the AOC will permit the Blue Lives Matter flag to remain once Untitled #1 is removed Tuesday.

It is often said that all politics is local. Perhaps it’s no surprise that in the stagecraft surrounding Untitled #1 lawmakers retreat to archetypes that best represent their districts. After all, that’s what lawmakers are supposed to do: represent their constituents.

For instance, what would Clay’s constituents say if he wasn’t vigilant in repeatedly defending Pulphus and his painting -- to say nothing of how some of his constituents feel about law enforcement after what went down in Ferguson?

By the same token, is it any surprise that “law and order” Congressmen like Hunter, Lamborn, Rohrabacher and Babin injected themselves into this play to show the lengths they go to defend police?

This raised the issue as to whether this was all just agitprop -- theatrical political action that helps Republicans and Democrats mold into their ideal paradigms.

Such is the case with the current collection of artwork now hanging in the Cannon Tunnel. In a few months, all will meet the same fate facing David Pulphus’s Untitled #1 on Tuesday: They’ll be removed.

Another crop of paintings will succeed this cycle’s collection. Sounds a little like congressional “term-limits.” Only Pulphus’s painting got the boot early.

The question now is whether artists and lawmakers will try to push the envelope to hang more provocative art after the next competition -- or whether the removal of Untitled #1 casts a chilling effect which yields more vanilla submissions and winners.

Pulphus’s art was political. But as the competition rules state, the irony is that they don’t want political art on Capitol Hill.