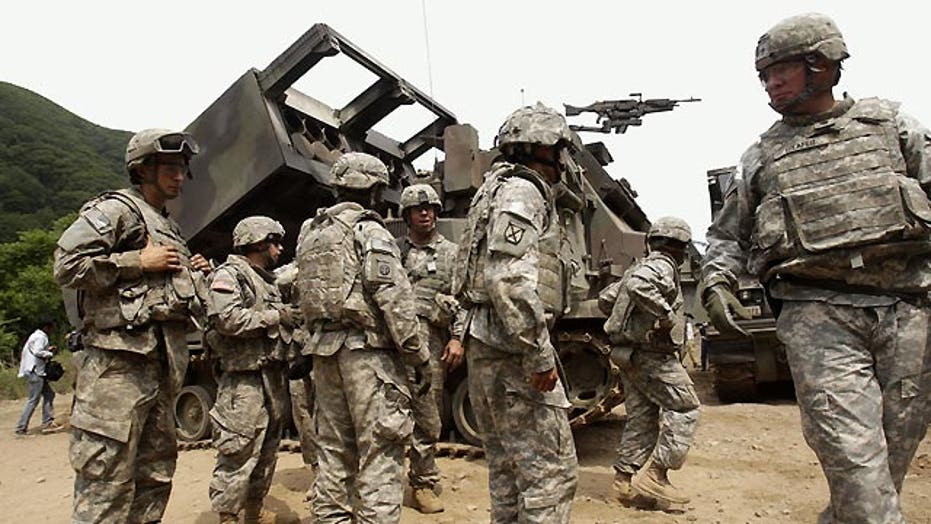 US Army to shrink to smallest ground force since 9/11

The U.S. Army on Thursday unveiled a controversial plan to reduce its force size by 40,000 soldiers, the latest downsizing of the U.S. military blamed on budget cutbacks.

Though military officials say their hands are tied by funding levels, lawmakers decried the reductions as a security threat. The new cuts will shrink the Army to its smallest size since 9/11.

"People who believe the world is safer, that we can do with less defense spending and 40,000 fewer soldiers, will take this as good news. I am not one of those people," House Armed Services Committee Chairman Mac Thornberry said in a statement.

On top of the Army reduction, the Navy may have to pull its aircraft carrier from the Persian Gulf for the first time since 9/11, Fox News has learned.

In a statement on Thursday, the Army revealed the timeline and specifics for the troop cuts, which among other changes would shrink units at Fort Benning, Ga., and Joint Base Elmendorf-Richardson, Alaska. According to the statement, the 40,000-troop reduction will be completed by the end of fiscal 2018, "and will be accompanied by the reduction of 17,000 Department of the Army civilian employees."

"These cuts will impact nearly every Army installation, both in the continental United States and overseas," the statement said.

Critics say this is not the right time.

"The ayatollahs in Iran who lead chants of 'Death to America!' are likely celebrating this news today," Sen. Tom Cotton, R-Ark., said.

"Army and Marine Corps end-strength is dropping dangerously low. The Air Force is the oldest and the smallest it has ever been. The Navy's fleet is shrinking to pre-World War I levels," Sen. John McCain, R-Ariz., chairman of the Senate Armed Services Committee, said Thursday.

But this is hardly the first time the Army has been told to make cuts.

The Army's No. 2 officer was asked Thursday morning why they are making these cuts now.

"These are not cuts the Army wants to make, these are cuts required by budget environment in which we operate," Gen. Daniel Allyn, vice chief of staff of the Army, said. "This 40,000 soldier cut ... will only get us to the program force, it does not deal with the continued threat of sequestration."

Overall, the U.S. military has been cut over 8 percent in the past five years.

The Marines have been cut 10 percent in that time period; and the U.S. Navy for the first time since 9/11 may have to pull its single aircraft carrier out of the Persian Gulf later this year without a replacement, when the USS Theodore Roosevelt leaves this fall. Fox News is told the U.S. military may rely on a French aircraft carrier until they can deploy another carrier, one of the subjects raised during a meeting with the French minister of defense and U.S. Defense Secretary Ash Carter Monday at the Pentagon, a few hours before President Obama spoke to the press.

At a Pentagon briefing on Thursday, Army Brig. Gen. Randy George, director of force management, said a total of 28 Army installations will see reductions due to the latest announcement.

Fort Benning would be cut by 29 percent and the Alaska base would be cut by 59 percent, in addition to smaller cuts to Fort Leonard Wood in Missouri and Schofield Barracks in Hawaii. The cost savings are "about $7 billion over four years," he said.

Cuts will begin this October, "driven by fiscal constraints resulting from the Budget Control Act of 2011 and defense strategic and budgetary guidance," George said.

However, multiple defense officials at the Pentagon told Fox News "sequestration" -- the common name for the Budget Control Act of 2011 -- had "nothing to do with these cuts to the Army."

Asked about the claims, George said: "The president's budget was submitted within reality." A total of 7,500 of the troop cuts will come from Brigade Combat Teams -- units that are the teeth of the U.S. Army.

In confirmation testimony for his Joint Chiefs chairman appointment on Capitol Hill, Marine Gen. Joe Dunford listed an array of threats still facing the U.S. despite the force cuts.