“Medical research as well as the data from Northeastern states, from across the country, and from around the world make clear that in-person learning is safe when the appropriate protections are in place, even in communities with high transmission rates,” said the statement from Cuomo, along with a number of other governors from New Jersey, Massachusetts, Delaware, Pennsylvania and Rhode Island.

“In-person learning is the best possible scenario for children, especially those with special needs and from low-income families. There is also growing evidence that the more time children spend outside of school increases the risk of mental health harm and affects their ability to truly learn,” the statement said.

The statement came a day after de Blasio announced that schools would close after the city’s 7-day test positivity rate hit 3%. De Blasio has set a metric of 3% for school closures as part of the partial re-opening plan in the fall, as he faced significant pressure from the powerful teachers union, which had threatened to strike.

The 3% threshold for NYC school closures has been a flashpoint for lawmakers, school officials and parents, as some argue the number is unnecessarily low. Even Cuomo has urged de Blasio to raise the threshold, citing lower infection rates in schools when compared to the city at large. 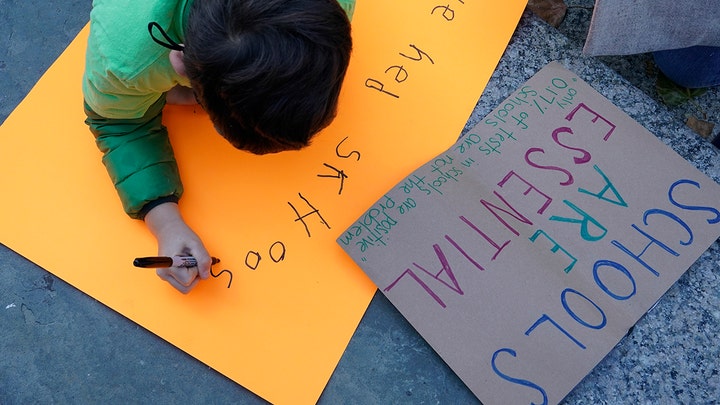 NYC Schools Chancellor Richard Carranza conceded as much this week when he noted in an email to principals that testing in school had produced a 0.19% positivity rate, which he called a “reassuring sign that our schools are safe.”

The closures have sparked fierce pushback from parents and advocates, who echo Cuomo’s statement that in-person schooling is low-risk, and that closing them causes significant harm to children and families -- particularly from low-income backgrounds.

De Blasio, meanwhile, tweeted on Thursday that the city was trying to bring back in-person learning as soon as possible -- but suggested it would come with even more stringent standards than were in place already.

“We all want to bring our schools back. We need to reset the equation to keep our schools safe. We are working on a new standard, including increased testing, to bring students and staff back safely,” he said.