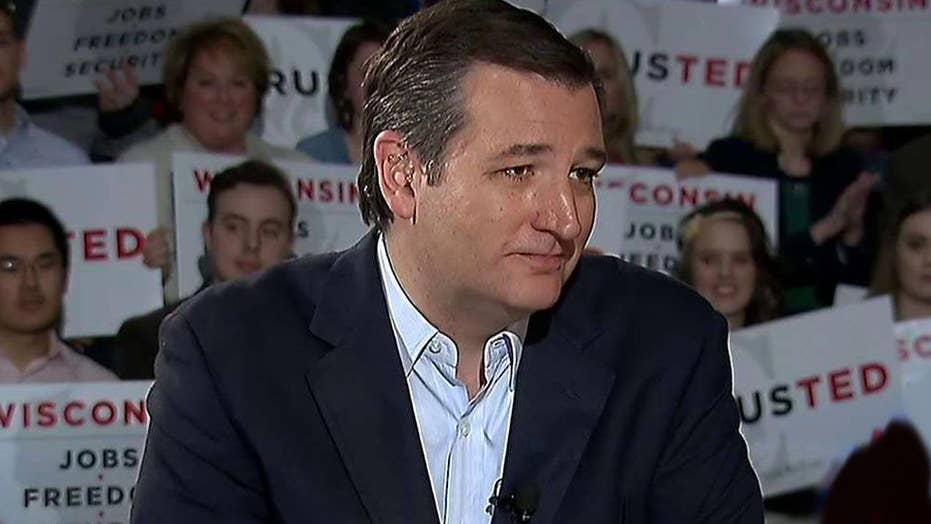 Sen. Ted Cruz on Monday reached out to female voters, claiming Donald Trump seems to have "a problem with strong women" as the two prepared for Tuesday's Wisconsin primary.

The Texas senator appeared to try to capitalize on Trump’s recent campaign missteps that seem to be alienating women voters, a crucial voting bloc to win a general election.

“He seems to have a problem with strong women,” Cruz said on a special Town Hall edition of Fox News Channel’s “Kelly File.”

“It’s going to be up to the men and women in Wisconsin” to decide who wins. “I could not be more encouraged by the enthusiasm.”

Trump in recent weeks retweeted an unflattering picture of Cruz’s wife, Heidi, and suggested “some form of punishment” for women who got an abortion if they were illegal - then issued two statements to clarify his position.

Now a recent WSJ/NBC poll shows 70 percent of women have an unfavorable view of Trump.

Cruz, who has a slight lead in Wisconsin, also referred to his wife as a “strong woman” and said he had never missed either of his two young daughters' birthdays, while also touting his jobs plan and promising to protect Americans.

“It’s time for a leader to say I’m going to bring jobs back to America and we're going to keep America safe,” he told Kelly.

He also responded to a question asked by Kelly over a report in the National Enquirer that he allegedly had several extra-marital affairs, which he referred to as "complete and utter garbage."

“I have always been faithful to my wife, I love my wife,” he said. ”She is my best friend in the whole world.”

There are 42 delegates available in the Wisconsin Republican primary.

Trump leads going into the contest with 736 pledged delegates, followed by Cruz with 463 and Ohio Gov. John Kasich with 143 -- with 1,237 needed to secure the nomination.

Cruz told Fox that he’s so far beaten Trump in 11 states, which would include primaries, caucuses and state conventions.

“And I’m confident after Wisconsin votes, it will be 12,” said Cruz, who like Trump continues to call for the last-place Kasich to quit the race.

“Someone is not electable if they can't get elected,” he said about Kasich, who has won only his home state of Ohio. “If you lose 49 states, you ain’t gonna be the Republican nominee.”

Earlier Monday in an "On The Record" town hall hosted by Fox News' Greta Van Susteren, Kasich said, "Both of them say I ought to get out of the race because I'm winning their votes. I agree with them."

During audience questions at the town hall, Cruz also faced the politically charged subject of abortion.

Cruz said he wouldn’t make abortion illegal, if elected president, though he is pro-life.

“If you're going to change a major issue of public policy the way to do so is at ballot box,” he said.

Cruz also said “one of the worst things” about  the Supreme Court’s 1973 Roe v. Wade ruling was that it took the decision about whether to have an abortion “out of the control of the people.”

“I believe we have democratic society,” Cruz continued. “If somebody wants to pass legislation limiting or expanding abortion  … it’s a much better system to have important policy decisions decided at ballot box.”

However, he also said high court decision was the result of “activism” and suggested it was not settled law.

He also brought up Trump's statements over the past week on abortion.

"He's willing to say whatever he can to win votes," Cruz said.

"The statement Donald Trump made this week...was a bizarre statement...it's showed he's not considered seriously this issue," he added.

Cruz also vowed Monday night he would "repeal every word" of ObamaCare when responding to a question in the town hall.

When asked how he would replace ObamaCare, Cruz said he would expand competition in the healthcare marketplace, empower patients to make decisions with their doctors, and discourage the government from getting involved.

"Everyone agrees we need health care reform," he said.

In a town hall appearance on "Hannity" with Fox News' Sean Hannity, Trump defended his campaign manager Corey Lewandowski, who was charged last week for allegedly assaulting a female reporter.

"Corey is a fine person...[but] I would've fired him on the spot if [an assault]actually took place," he said.

“Maybe I should file charges against her for grabbing me or touching me," Trump said, referring to the reporter Michelle Fields.

Earlier Monday evening, Trump's wife Melania made a rare speaking appearance at a rally for her husband in Milwaukee. In a short speech, she defended her husband against charges that he is alienating female voters.

"No matter who you are, a man or a woman, he treats everyone equal," she said.

Melania Trump also described her husband as strong, tough and a great leader, adding, "When you attack him, he will punch back 10 times harder."