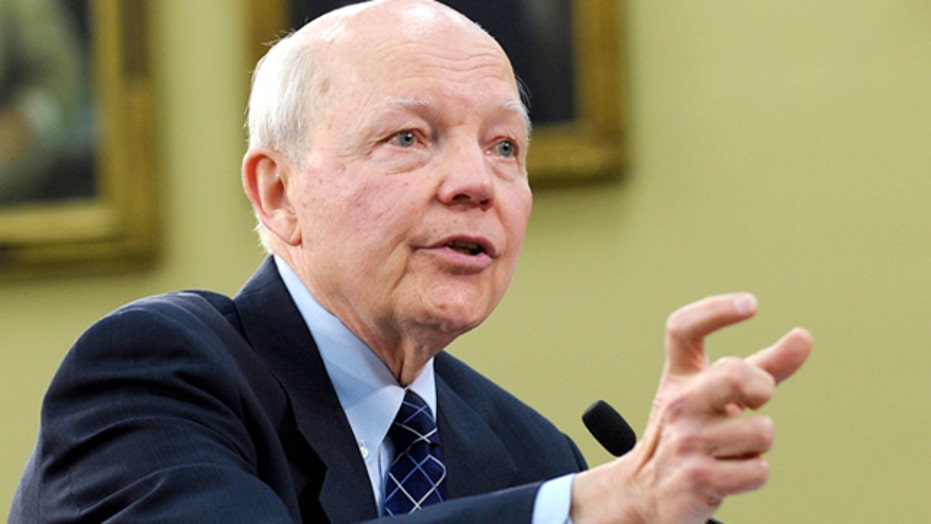 Rep. Steve Russell says it's time for Koskinen to go

Republican presidential candidate Ted Cruz grilled IRS Commissioner John Koskinen and assailed the agency he leads at a heated hearing Wednesday where he likened claims that emails from controversial ex-official Lois Lerner were lost to a Richard Nixon cover-up.

“I have to say, Richard Nixon’s ghost must have been smiling [at the claim that emails were lost]," he said. "Tricky Dick understood well destroying emails – in his day, it was erasing tape. But it was much the same. We should expect accountability from our government.”

The Texas senator chaired the hearing, which focused on the 2013 scandal in which the IRS acknowledged agents had improperly singled out Tea Party and other conservative groups for extra scrutiny when they applied for tax-exempt status during the 2010 and 2012 elections.

"We have seen the creation of an entity that I believe is no longer serving the interests of the American people," Cruz said.

Sen. Chris Coons, D-Del., said Cruz's accusations don't exactly match the evidence. "Many of the allegations just made at the opening of this hearing strike me as a rehashing of complex conspiracy theories already thoroughly investigated and dismissed by the inspector general himself," Coons said.

At the hearing, Koskinen said the agency has taken steps to make sure that tax-exempt groups are no longer mistreated. Koskinen cited a recent report by the inspector general that said the IRS has taken "significant actions" to improve the processing of applications for tax-exempt status. "The situation described by the inspector general in his May 2013 report should never have happened, and we are doing everything possible to ensure that the mistakes referenced in the report do not happen again," Koskinen said.

Cruz, meanwhile, repeatedly questioned how the administration lost thousands of email records at that time, namely those from Lerner, the official who led the unit at the heart of the controversy. And he complained that no employees were indicted after targeting was uncovered.

This week, 21 Republican House members also called on President Obama to fire Koskinen, saying he has obstructed congressional investigations. The IRS disputed the accusation and the Treasury Department issued a statement supporting Koskinen.

The scandal came before Koskinen’s appointment. He said Wednesday that while some groups were targeted, he didn’t believe IRS officials were politically motivated.

He added that Americans don’t trust the agency. “The IRS hurts the American dream, it takes money out of the pockets of hard-working Americans, it reduces their take-home pay, it stifles economic growth,” he said. “There are few things more terrifying to Americans than when the IRS comes knocking on your door."