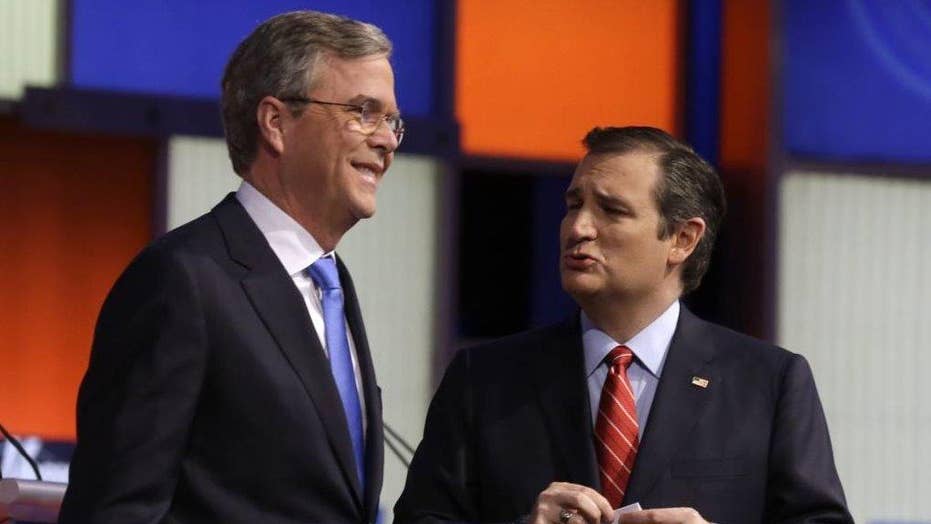 Top GOP "establishment" figures keep lining up behind self-described “outsider” Ted Cruz in what appears to be a concerted bid to keep front-runner Donald Trump from running away with the nomination -- yet raising the question of whether they've ruled out John Kasich entirely.

Jeb Bush’s Wednesday endorsement of the Texas senator is the latest backing that would have been almost unthinkable even six months ago.

Bush’s thumbs-up for the firebrand conservative follows similar support from 2012 GOP nominee Mitt Romney and, perhaps even more surprising, South Carolina Sen. Lindsey Graham -- who once remarked that if someone shot Cruz in the Senate, no senator would convict the shooter.

The endorsements have all been carefully tailored to show they are uniting behind Cruz as the best bet to thwart Trump.

“For the sake of our party and country, we must move to overcome the divisiveness and vulgarity Donald Trump has brought into the political arena, or we will certainly lose our chance to defeat the Democratic nominee and reverse President Obama’s failed policies,” Bush said in a statement Wednesday.

“The only path that remains to nominate a Republican rather than Mr. Trump is to have an open convention,” said Romney in backing Cruz last week. “At this stage, the only way we can reach an open convention is for Senator Cruz to be successful in as many of the remaining nominating elections as possible.”

While it seems apparent that the endorsements are more anti-Trump than pro-Cruz, it is notable that the so-called establishment appears to be ignoring the more moderate Ohio Gov. Kasich.

The most obvious reason for this is the sheer delegate count. Behind Trump’s 739 delegates, Cruz has 465 and Kasich has 143. While Cruz’s path is slim to an outright majority, Kasich has no path to clinching the nomination without a contested convention in Cleveland in July.

Cruz's performance to date, as Romney suggests, also could make him the best vehicle for drawing delegates away from Trump in the remaining contests and holding him under the 1,237 delegate threshold to clinch the nomination.

“Establishment Republicans are now gravitating towards Cruz because of the simple delegate math that shows there is absolutely no way Kasich can win unless there is a brokered convention,” he told FoxNews.com.

Yet, Bonjean notes that should a contested convention arise, things could change, and these same Republicans might move to back Kasich.

“Of course, this support for Cruz could change the very minute there is a brokered convention to Kasich or someone else," Bonjean said.

Team Kasich has a powerful argument in its pocket.

While Kasich is significantly behind Cruz in terms of delegates, his head-to-head polling numbers against likely Democratic nominee Hillary Clinton blow Cruz’s out of the water. A Quinnipiac poll released Wednesday gives Kasich an eight-point lead against Clinton in a general election matchup, while finding Trump loses to Clinton by six and Cruz by three.

The Kasich camp is hammering this point, perhaps hoping those siding with Cruz now might indeed reconsider at a contested convention.

In a campaign memo released Wednesday, chief strategist John Weaver cited a number of polls showing Kasich to be the best bet against Clinton, and called him the key to stopping Trump.

“Moving forward, Gov. Kasich is the key to our party’s hope of stopping Donald Trump and the potential disastrous consequences of his nomination,” Weaver wrote. “Assertions to the contrary are misleading. They are disingenuous attempts to mislead Republicans and hand the nomination to Donald Trump.”

Weaver went on to write that Kasich is the best candidate to have for candidates down the ballot, and to unite the party.

That argument appears to have been ineffective with many senior Republicans. Romney, in his statement endorsing Cruz, recognized how he has campaigned with Kasich, but suggested backing Kasich is a non-starter.

“I like Governor John Kasich. I have campaigned with him. He has a solid record as governor. I would have voted for him in Ohio. But a vote for Governor Kasich in future contests makes it extremely likely that Trumpism would prevail,” Romney said.

Kasich’s campaign memo seems to indicate something similar. Perhaps recognizing that Kasich’s best path to the nomination lies in a contested convention, Weaver calls Kasich “the best choice at the Convention.”