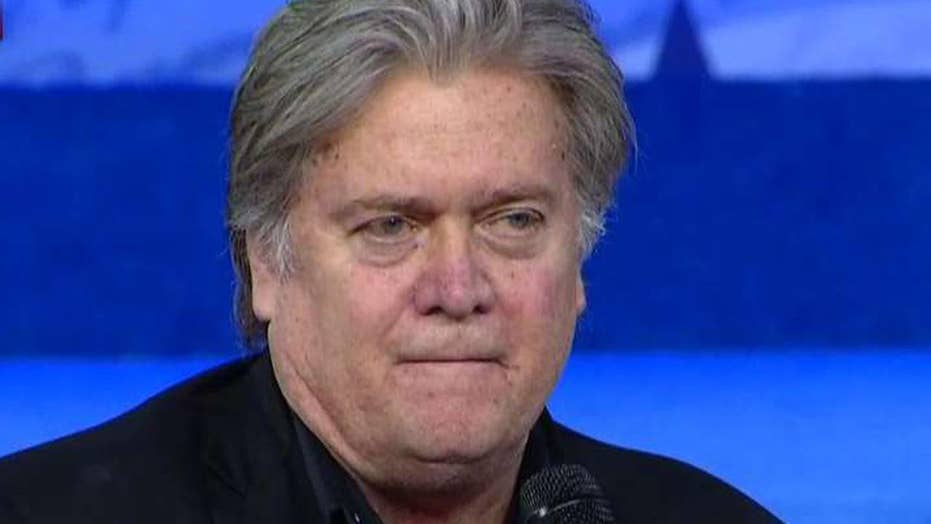 Bannon on media coverage: It's going to get worse every day

White House chief strategist Steve Bannon lived up to his fiery reputation Thursday during a talk before the Conservative Political Action Conference, predicting a prolonged fight with the media, which he again branded “the opposition party.”

Bannon, who spoke on a panel alongside White House Chief of Staff Reince Priebus, also dismissed rumors of friction with his colleague.

The bare-knuckled Bannon -- who is frequently covered by the media in often-sensational terms but rarely speaks to reporters -- pulled no punches as he used the panel to outline how he saw the Trump presidency playing out. He predicted that as Trump continues to push his agenda, the media will oppose him every step of the way.

For much of the talk, Bannon labeled the media “the opposition party” as he has before. This view has been reflected in Trump’s own combative remarks with outlets he has branded “fake news.”

Bannon, who was in charge of conservative news site Breitbart News until he became Trump’s campaign CEO in August, promised that Trump’s agenda, which he said would focus on areas such as economic nationalism, would be pushed through. He predicted the “corporatist, globalist media” would oppose the president at every step.

“President Trump is following through on what he promised the American people, and the mainstream media better understand something — all of those promises are going to be implemented,” he said to cheers from the audience.

Amid some reports that Bannon and Priebus don’t get along, both men said they get on fine.

“We share an office suite, we’re basically together from 6:30 in the morning to 11 at night,” Priebus said, adding that one of Trump’s big achievements has been to unite the Republican Party and the conservative movement.

“I can run a little hot on occasions, and Reince is indefatigable, it’s low key but it’s determination,” Bannon said. “Reince is always steady.”