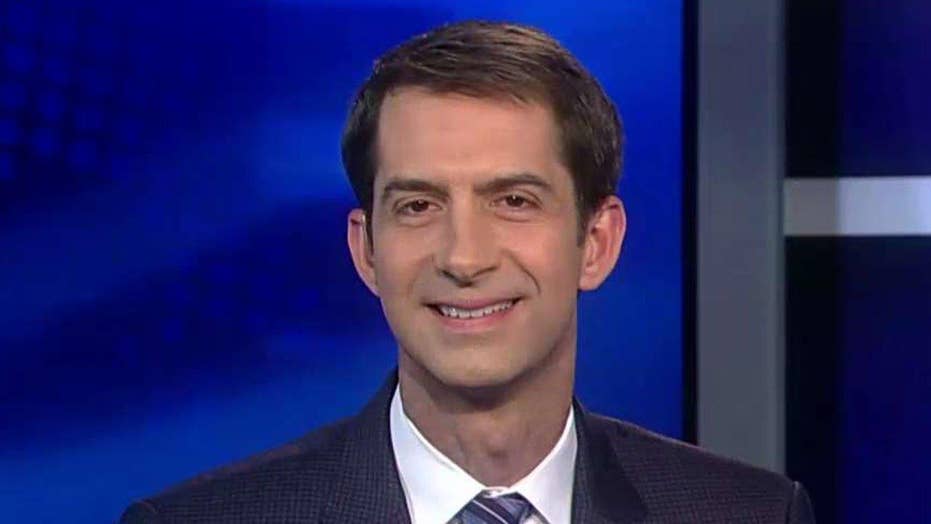 Cotton: Almost every Republican in Congress on Trump's side

Arkansas Sen. Tom Cotton on Sunday joined fellow congressional Republicans in approving of President Obama punishing Russia for its part in an email hacking scheme related to the 2016 presidential race but said the action was long overdue.

“I’m glad, but it’s too late,” Cotton, a member of the Senate Committee on Armed Services, told “Fox News Sunday.”

On Thursday, Obama announced a set of sanctions in retaliation for Russia’s involvement in the hacking and public release of emails from the Democratic National Committee and the campaign chairman of the party’s presidential nominee, Hillary Clinton.

Cotton’s remarks are similar to those of House Speaker Paul Ryan and Texas GOP Sen. Mike McCaul, chairman of the House Committee on Homeland Security.

“I am pleased to see the Obama administration is finally responding to Russian meddling,” McCaul said Thursday. “But these actions are long overdue. … For years I have pressed them to stand up to Russia … . I look forward to working with the incoming Trump administration to make sure that … our adversaries do not to do it again.”

Obama, a Democrat, vowed retaliation in the aftermath of Republican Donald Trump’s upset victory in November over Clinton, despite Obama having just weeks left before Trump takes over the White House.

Trump has been skeptical of the statements by the U.S. intelligence community definitively linking the email hacks directly to Moscow.

And he has also insisted that it’s time for the country to “move on to bigger and better things,” while Cotton and other supporters continue to argue that Clinton lost the race as a result of a failed candidacy, not Russian President Vladimir Putin’s influence.

Still, Trump said after Obama announced the sanctions that he would meet with leaders of the intelligence community this week on the issue.

Putin has declined to retaliate for the sanctions, suggesting that he’ll wait to deal with Trump, with whom he appears to have a mutual admiration.

The support for Obama’s  sanctions from congressional Republicans including Cotton, McCaul and Ryan -- who also said such action was “overdue” -- were clearly measured to make clear they are ready to work with Trump, despite his skepticism.

Cotton also told “Fox News Sunday” that the hacking was “just one many” troubling action by Russia, citing the country's interference with NATO ships and its annexation in 2014 of Ukraine’s Crimea region.

“President Obama has consistently looked the other way from Russia’s provocations and aggressions,” Cotton said. “The DNC hack last year was just one minor item in what Russia has done over the last eight years. “