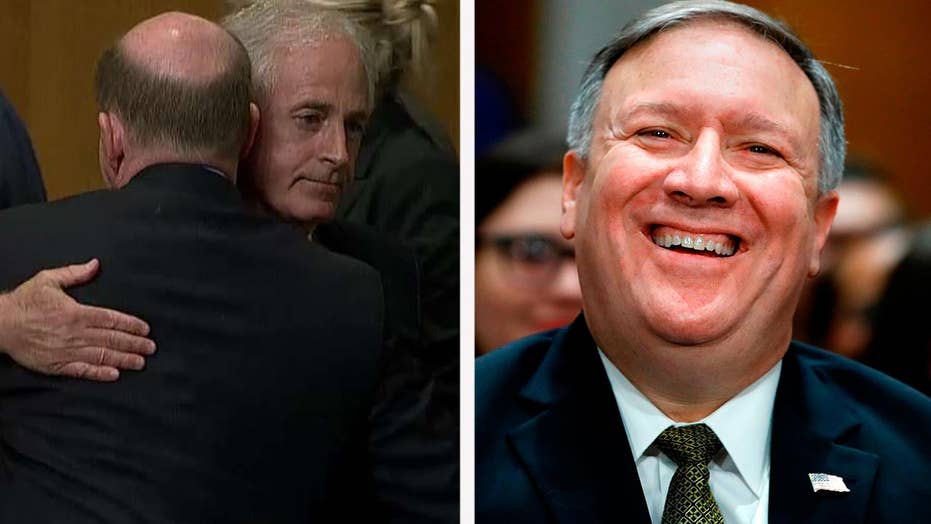 Democratic senator changes his vote to 'present,' sending Mike Pompeo's nomination to be secretary of state to the full Senate; Fox News senior judicial analyst Brit Hume weighs in on the clash over President Trump's pick to be the nation's top diplomat.

The Senate will likely vote to confirm Mike Pompeo as the nation’s top diplomat later this week.

But Sen. Chris Coons, D-Del., appeared to earn that distinction for at least a few hours Monday night.

The fate over Pompeo hop-scotched between no fewer than five members of the Senate Foreign Relations Committee late Monday as the panel tried to discharge the nomination to the floor.

The success of the nomination initially hinged on Sen. Rand Paul, R-Ky., who long opposed Pompeo. Then it was up to Sen. Jeff Flake, R-Ariz., who had been undecided.

Sen. Rob Portman, R-Ohio, next. He was running late.

It later toggled to Sen. Johnny Isakson, R-Ga., who was away in mourning at the funeral of a best friend in Georgia.

Finally, Pompeo’s future landed in the hands of Coons, who opposes the nominee for secretary of state. And by the end of the night, it was the Delaware Democrat who helped propel the nomination to the floor with a surprising, O. Henry twist.

Coons will oppose the Pompeo nomination on the floor later this week. But on Monday, Coons found a friend in need: Isakson.

Isakson supports Pompeo’s nomination and will vote yes. But the Georgia Republican delivered the eulogy at the funeral back home and couldn’t make the 5 p.m. ET meeting of the Senate Foreign Relations Committee on Pompeo. Senators on the panel were slated to vote Pompeo’s nomination out of committee and advance it to the floor. But the question was whether they would vote on the nomination favorably, unfavorably or without recommendation. 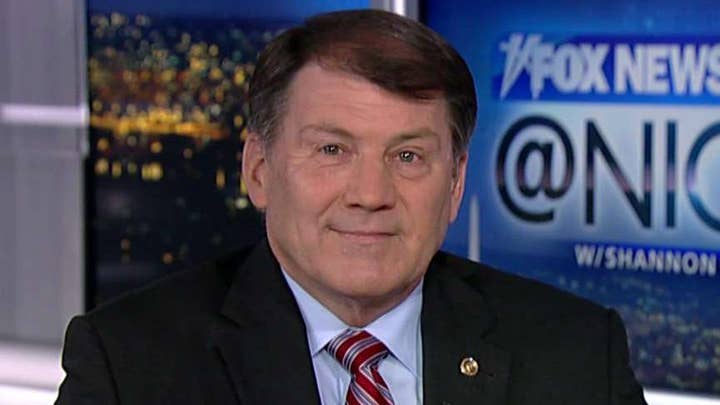 The panel is narrowly divided: 11 Republicans and 10 Democrats.

After lots of drama last week and Monday, it was clear Pompeo would likely secure just enough votes to score confirmation. But the question lingered about how the committee would send the nomination to the floor. The committee can grant a nominee a favorable vote, an unfavorable vote or grant no recommendation whatsoever.

It was first thought there was trouble with Paul. Paul announced his opposition to Pompeo a few weeks ago and even took a special meeting with the nominee late last week.

“I think that it would be quite surprising to the voters of Kentucky to see Rand Paul vote for John Kerry for Secretary of State and yet against Mike Pompeo,” Marc Short, the White House Director of Legislative Affairs, said.

It was also unclear where Flake may come down.

Never before had a nominee for secretary of state received anything but a glowing score from the committee. The last time the full Senate confirmed a cabinet-level nominee with an unfavorable committee recommendation came in 1945. That’s when the Senate confirmed former Vice President Henry Wallace as commerce secretary.

“I want to thank Sen. Coons for displaying statesmanship. It shows that senators at the right time can do outstanding things.”

The Senate confirmed Clarence Thomas for the Supreme Court despite the judiciary committee giving the nominee no recommendation in 1991.

So it was thought Pompeo may secure anything but a favorable recommendation.

However, moments before the committee met, Paul flipped his vote to yes. Flake also ended his holdout and announced he was a yea. So, the committee appeared to be on track to give Pompeo the Good Housekeeping Seal of Approval on an 11-10, party-line vote.

Sen. Bob Corker, R-Tenn., the committee’s chair, indicated there “were some logistical issues” the panel had to work through.

When Corker gaveled the session to order, Portman, Isakson and Coons were absent. It was quickly confirmed that Portman and Coons ran into travel snafus but were en route. Isakson’s office said the senator was speaking at the funeral and wouldn’t hit DC until after 11 p.m. ET.

Portman arrived. But not Coons. His flight was canceled.

“If I were to call the vote right now, we would vote (Pompeo) out right now,” said Corker, knowing that with the presence of Portman and the support of Paul and Flake, the committee could vote in favor of the nominee 10-9. “Let it be noted that I told Sen. Coons we would wait until he was here to have the vote.”

Coons finally arrived. However, Isakson was still in Georgia. The vote to report Pompeo out of committee with a favorable recommendation would be 10-10.

By rule, ties fail. But Corker forged ahead, declaring that Isakson, despite his absence was “aye by proxy.” So 11-10. Still, committee rules forbid proxy votes on behalf of absent senators if they impact the outcome of a roll call tally. So there was a conundrum.

Corker fretted about setting a new precedent, dispatching Pompeo’s nomination to the floor with anything short of a favorable rating. Corker then mulled delaying the vote until Isakson could arrive late Monday night.

“I’m willing to stay until whatever hour is necessary,” said Sen. Bob Menendez, D-NJ, the top Democrat on the committee.

“Bring the coffee,” shot back Corker.

Still, the committee voted. And sure enough, the vote was 11-10. But in essence, deadlocked thanks to Isakson’s proxy vote.

Coons proffered sending the nomination to the floor with no recommendation. Corker suggested a voice vote where the senators aren’t recorded and the loudest side prevails.

Corker then pondered if a Democrat could vote present. And Coons, despite his opposition to Pompeo, offered to switch his committee vote from no to present in an effort to advance the nomination to the floor – to offset the absence of his friend Johnny Isakson.

The committee voted again. This time the vote was 11-9 with Isakson voting yea by proxy and Coons voting present, not nay. Coons decision to switch to “present” made Isakson’s yea vote count, despite his absence.

“I want to thank Sen. Coons for displaying statesmanship,” said Corker, choking back tears. “It shows that senators at the right time can do outstanding things.”

Coons said it would have been “cruel” to haul Isakson back to Washington just to vote sometime before the witching hour Monday night.

“Johnny Isakson is one of my best friends,” said Coons. “Johnny had a difficult day. He delivered the eulogy today for his best friend.”

Coons said when his father died, a Republican senator he didn’t know well offered to “pair” his vote with Coons so he could attend the funeral. The practice of “pairing votes” is when two senators on opposite positions of an issue agree in tandem not to vote. The phenomenon offsets each other’s votes. The Coons-Isakson alliance on Pompeo wasn’t a true “paired” vote. But the outcome was the same.

“Several of my Democratic colleagues said it’s the right thing to do,” observed Coons.

In a statement later, Coons said he’d still vote against Pompeo on the floor.

“At some point, Democrats have to decide whether they love this country more than they hate this president,” said Sanders.

A lot of Democrats don’t think much of President Trump. Many don’t support Mike Pompeo to be the next Secretary of State. But after this evening’s vote, one thing’s for sure: Chris Coons has love for his friends.