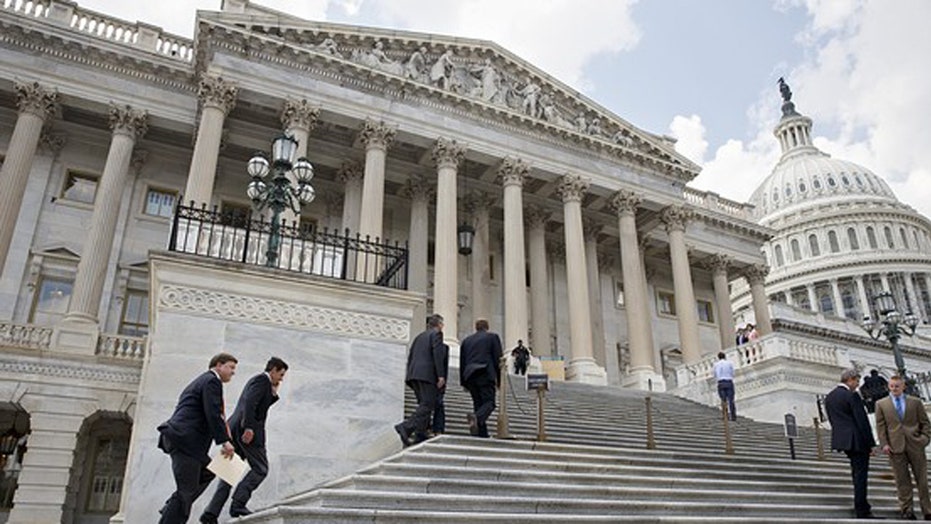 Is voter sentiment fueling the chaos on Capitol Hill?

Inside the potential fallout from House speaker shakeup

Grassroots conservatives are doing a victory lap after House Majority Leader Kevin McCarthy abruptly withdrew from the speaker race – but whether they can come together behind a consensus candidate and a common agenda remains to be seen.

What exactly these groups and lawmakers want in a new leader, and whether they’d back somebody who also has favor with the so-called “establishment,” is the big question as the House postpones leadership elections.

In a series of interviews on Friday, representatives with several influential conservative groups told FoxNews.com they’re looking for a candidate who speaks to their values. Specifically – while their stances are not monolithic – they said they want to see someone who will “hold the line” on budgetary spending caps. Some also want to see more done on tax reform, an often-discussed goal that has never materialized into real action, as well as regulatory reform and efforts to rein in agencies like the EPA and IRS.

“There are places where we can and should be fighting,” Mark Meckler, president of Citizens for Self-Governance, told FoxNews.com.

Meckler has traveled to dozens of states to gauge political sentiment within the conservative base. “They are frustrated that their representatives have been fighting no fight. They feel like all they’ve seen is capitulation, surrender and unwarranted compromise. And they are looking ahead at leaders who will pick those strategic fights,” he said.

Meckler and others say the sticking point is also about style.

“From a grassroots perspective, I think [McCarthy] was polluted from the start in his association with [John] Boehner,” he said. “The way Boehner ran the House, there was very little input from the conservative wing and that was very frustrating for people.”

McCarthy, in withdrawing, said he thinks the conference needs a “fresh face” and voiced doubts about his own ability to attract a majority vote for speaker on the House floor.

His announcement immediately put attention on the conservative House Freedom Caucus, whose 30-40 members were planning to back rival candidate Rep. Daniel Webster, R-Fla. But that’s just one faction – leaders face pressure from an array of conservative blocs, who in turn face pressure from a network of Tea Party groups, fiscal watchdogs and others pushing for limited government, lower taxes, and other issues, each with a different idea of what fights are worth having and what fights are a lost cause.

One area of common ground might be in budgetary spending caps, which some Republicans have tried to ease for defense.

“Our activists are adamant they hold the line on those spending caps,” said Levi Russell, spokesman for Americans for Prosperity. “I think there is recognition that some issues are more controversial than others. I think you start with spending. I think there is ample opportunity to enjoin the leadership on that issue.”

That, he added, will “give breathing space for the other, more controversial issues.”

Despite grumbling from the base, Boehner has entertained efforts to launch against-the-odds legislative fights with the administration, most notably using the budget as leverage to try and undo ObamaCare in 2013. The effort failed, as did a short-lived attempt to defund Planned Parenthood.

There is no question these activists feel emboldened by recent events. After McCarthy dropped out, Tea Party Patriots co-founder Jenny Beth Martin declared it the second “victory” for the grassroots – the first being Boehner’s resignation.

Left vying for the speakership are Reps. Jason Chaffetz, R-Utah, and Webster. It is not clear whether either could get the roughly 218 votes needed to win. Others are considering joining and top GOP leaders are meanwhile pressuring Rep. Paul Ryan, R-Wis., to enter, despite his resistance.

“[Ryan] is a very credible candidate,” Rep. Mark Meadows, R-N.C., a member of the Freedom Caucus, told Fox News, adding: “Outside of that, there are already other candidates who are here.”

Meckler said there is a good chance other conservatives may end up jumping in by early next week. “There are people who have been in Congress for a little while, they know the people and they have a great track record,” he said, noting he’s heard Tennessee Rep. Marsha Blackburn’s name bandied about, as well as Arizona Rep. Matt Salmon’s. “I would love to see [Texas Rep.] Jeb Hensarling get in the race,” he added.

As with the presidential primary race right now, Martin said, this is a time for outsiders, and not “establishment thinking.”

Yet, practically speaking, it’s unclear whether any true outsider candidate could muster a majority on the House floor for the speakership. Deep divisions remain in the Republican caucus, with a key complaint against the conservative wing being that they expect the leadership to be unyielding on demands they have little chance of getting.

Republican strategist Brent Littlefield said it is reasonable to look for a leader who sticks to conservative principles, but can “bring everyone together to move an agenda and be a good spokesman for our common beliefs.”

“I don’t think they are exclusive of one another,” he said.