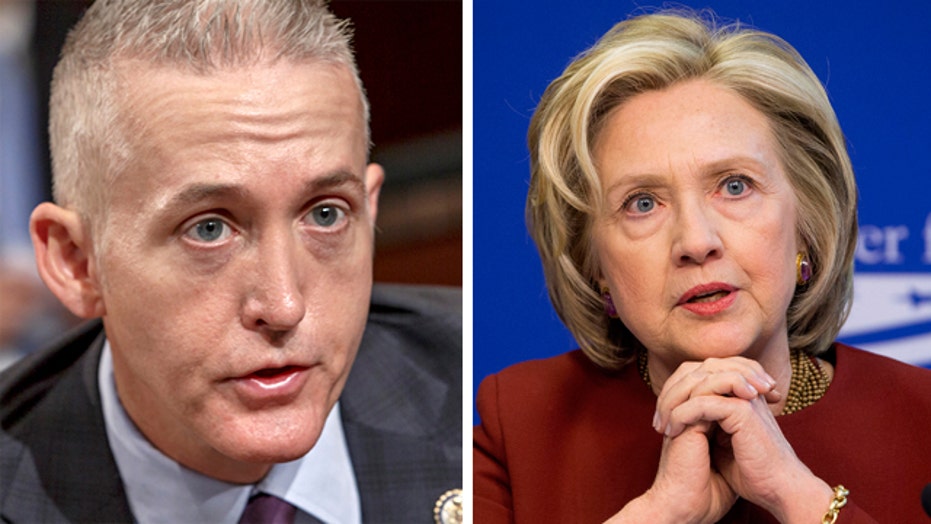 Judge Jeanine: Hillary between a rock and a hard place

Pop quiz! What do these figures have in common?

Answer: All have been summoned to Capitol Hill under lawmakers' new favorite investigative tool.

The U.S. Constitution grants Congress lots of power, including the ability to request persons from a variety of fields to come by the Capitol for what is now called a "transcribed interview."

It's not quite an under-oath hearing. But it's an effective way to get to the bottom of any scandal.

That's why House Benghazi Committee Chairman Trey Gowdy, R-.S.C., fired off a letter last week to Hillary Clinton's attorney, David Kendall, amid the controversy over her personal emails and server.

The same with former House Oversight Committee Chairman Darrell Issa, R-Calif., when he summoned IRS figures and those tied to the gun-walking scandal which came to be known as "Fast and Furious" to appear for transcribed interviews. Current House Oversight Committee Chairman Jason Chaffetz, R-Utah, got into it over the past week with Homeland Security Secretary Jeh Johnson and Secret Service Director Joseph Clancy over hauling in various officials for transcribed interviews about the recent incident involving allegedly drunk agents at the White House. Baseball players Tejada, Knoblauch, Pettitte and Clemens all submitted to transcribed interviews before the House oversight panel when Congress probed the use of performance enhancing drugs in the National Pastime. Congress eventually referred Clemens and Tejada to the Justice Department for criminal prosecution for not telling the truth. Tejada pleaded guilty to charges that he lied to Congress in his 2005, closed-door, transcribed interview.

Following his transcribed interview, Clemens demanded and got a full-blown, open hearing in an effort to clear his name. Lawmakers issued Clemens a criminal referral because they found things he said in the transcribed session didn't jibe with his remarks at the public hearing. After a lengthy criminal battle, a jury later acquitted "The Rocket."

In the legal world, there are depositions. But a congressional, transcribed interview is not quite an equivalent. In the legal setting, depositions are usually conducted under oath. Those who submit to transcribed interviews aren't bound by oaths. But there is the implication that lawmakers and their aides expect persons to tell the truth. Those appearing for such transcriptions are advised as such at the beginning of the session.

The term "transcribed interview" is emerging as a favored, blunt tool deployed by lawmakers from which to mine subjects for information in the various inquiries of the hour.

At the outset of the Benghazi inquiry, Gowdy cautioned he wouldn't conduct too many open hearings. Congressional hearings may make for better television with lawmakers browbeating witnesses across the dais and speechifying rather than asking questions during their five-minute time allotments. Gowdy's position is that you can reap a lot more information in a closed-door, transcribed session than in a theatrically staged hearing.

Gowdy wrote Clinton's counsel Kendall that he'd like to have the former secretary of state submit to a transcribed interview regarding her "use of private email and a personal server for official State Department business." Gowdy argued that his committee "is left with no alternative but to request Secretary Clinton appear before this Committee for a transcribed interview to better understand decisions the Secretary made relevant to the creation, maintenance, retention, and ultimately deletion of public records."

Meantime, the top Democrat on the Benghazi committee, Rep. Elijah Cummings, D-Md., doesn't see the need for a transcribed chat.

"Rather than drag out this political charade into 2016 and selectively leak portions of a closed-door interview, the Committee should schedule the public hearing, make her records public and re-focus its efforts on the attacks in Benghazi," said Cummings.

There is also another reason Gowdy wants to huddle with Clinton off-stage.

"The Committee believes a transcribed interview would best protect Secretary Clinton's privacy, the security of the information queried and the public's interest in ensuring this Committee has all information needed to accomplish the task set before it," Gowdy wrote to Kendall.

Again, potential value there versus fleshing out sensitive information in an open hearing.

And this is the essence of a dispute with the Secret Service over the March episode where agents pulled up to a checkpoint -- purportedly drunk -- and interrupted the investigation of a bomb scare on the White House grounds. Chaffetz subpoenaed two USSS officials to meet with his staff for a transcribed interview.

DHS Secretary Jeh Johnson initially called the subpoenas for the sessions "unprecedented." Johnson indicated that the service was willing to free up a variety of Secret Service officials for those transcribed huddles.

Former U.S. Attorney Dennis Burke told congressional investigators he made mistakes and needed "to take responsibility" for some components of Fast and Furious during his transcribed interview a few years ago. Issa and his staff released excerpts from a transcribed interview with the Treasury Department's Mark Mazur about delays in the roll out of ObamaCare. Issa did the same with portions of transcribed interviews with IRS officials from Cincinnati about whether the service targeted conservative organizations for scrutiny because of their political views.

With its baseball probe, the House Oversight Committee originally asked Chuck Knoblauch to testify at an open hearing, but the infielder didn't show up. After pressure from lawmakers, Knoblauch voluntarily submitted to a private, transcribed interview in 2008 in preparation for the hearing which looked at allegations surrounding Clemens.

In China, troublemakers for the government are sometimes invited by state authorities to "drink tea." Such a visit is anything but a social occasion. There are thousands of stories about various dissidents, bloggers, protesters or others who challenge the government whom are picked up by police to "drink tea" when their activities start to challenge the stability of the regime. And in the years since the Chinese government began employing these tactics, "drinking tea" has become a euphemism for harsh interrogations rather than friendly chats over piping hot cups of oolong or jasmine brews.

Granted, Congress doesn't pursue rabble-rousers with the same ferocity of Chinese state authorities when they extend an invitation to "drink tea." But you don't want to get a summons to swing by Capitol Hill for a "transcribed interview," either. That usually means lawmakers mean business and are trying to find out the truth about some behavior, activity or government operation they don't like.