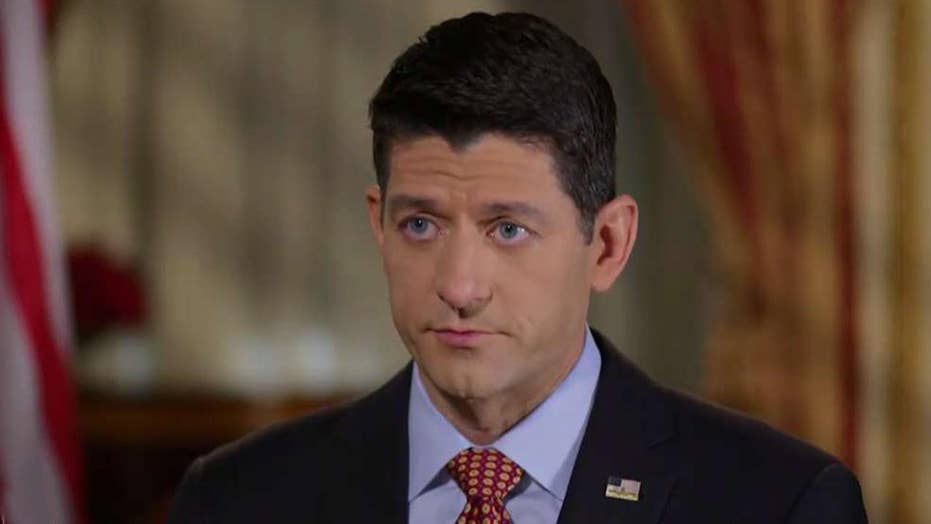 Speaker of the House sits down with Chris Wallace on 'Fox News Sunday.'

Top House Republicans have opened the door to using their sweeping tax bill to repeal ObamaCare's individual mandate, as they began retooling the tax proposal Monday in pursuit of a final version that can pass Congress.

House Speaker Paul Ryan, the top Republican in the GOP-controlled chamber, this weekend acknowledged that a measure to nix the requirement to buy health insurance could be included in the final tax package.

“We have an active conversation with our members and a whole host of ideas on things to add to this bill,” Ryan, R-Wis., told “Fox News Sunday.” “And that’s one of the things that’s being discussed.”

The mandate, which imposes a tax penalty on Americans who fail to buy insurance under ObamaCare, is considered a critical component of the 2010 health care law. While previous efforts to overhaul the law have failed, repealing just the mandate could have significant consequences.

“Wouldn't it be great to Repeal the very unfair and unpopular Individual Mandate in ObamaCare and use those savings for further Tax Cuts for the Middle Class,” the president tweeted Wednesday, one day after House Republicans released their plan.

Trump’s request surprised congressional Republicans, considering they carefully crafted a tax plan with hopes it could pass the GOP-controlled House and Senate and even garner some bipartisan support. A mandate repeal could drive away wavering Democrats. But the call also comes as Americans face soaring premiums under the health law for 2018.

If successful, Trump could in part fulfill a major campaign promise to dismantle ObamaCare -- after the Senate failed this summer to pass a House-approved replacement plan.

“The president feels very strongly about including this at some step along the process. He’s told me that twice by phone and once in person,” Texas Rep. Kevin Brady, chairman of the tax-writing House Ways and Means Committee, said last week at a Politico forum.

The committee on Monday approved a “substitute” amendment introduced by Brady which replaces the old bill text. The substitute amendment does not include a repeal of the individual mandate. However, the House Ways and Means Committee has planned several days of “markup” sessions where members continue to craft the bill, line by line. This could continue through late Wednesday or early Thursday.

Fox News is told there is consternation from the House Republican leadership about adding a repeal of the mandate to the legislation. Part of the problem is that they don’t want to conflate health care with tax reform – since the resolution to the former went so poorly earlier this year. This could be added in the Rules Committee later on.

Repealing the mandate could reduce the federal deficit by hundreds of billions of dollars, even though it would end a steady tax-revenue stream for the federal government from fines.

Because Americans would no longer be forced to buy insurance, fewer would use federally funded Medicaid or require federal subsidies to pay for premiums, which would result in a net savings.

A report last year by the nonpartisan Congressional Budget Office projected that repealing the mandate starting in 2018 would by 2026 reduce federal budget deficits by roughly $400 billion.

The idea of nixing the mandate in the tax bill is being touted by Arkansas GOP Sen. Tom Cotton.

“I have what I would call maybe a creative idea, a novel idea,” Cotton said last week. “We can repeal the individual mandate of ObamaCare and save $300 to $400 billion dollars. … That's not my math. That's the math of the Congressional Budget Office.”

Brady has asked the CBO for a new analysis, which could be released as early as this week.

However, ending the individual mandate doesn’t appear to have support among congressional Democrats, particularly in the Senate where Republicans have just a 52-48 member majority.

Senate Minority Leader Chuck Schumer hasn’t outright opposed repealing the mandate in the GOP tax overhaul bill but has suggested the idea could itself kill the plan.

“A lot of the Republicans said this bill is too heavy a lift already,” the New York Democrat told reporters Friday. “To add that to it might be the straw that would break the camel’s back even further. So I think it is unlikely that they would add that. “

“It has been more than three decades since America’s tax code was reformed under President Ronald Reagan,” Brady said. “Our committee has dedicated a substantial amount of time, energy, and work to the pursuit of one landmark goal -- delivering comprehensive tax reform to the American people.”