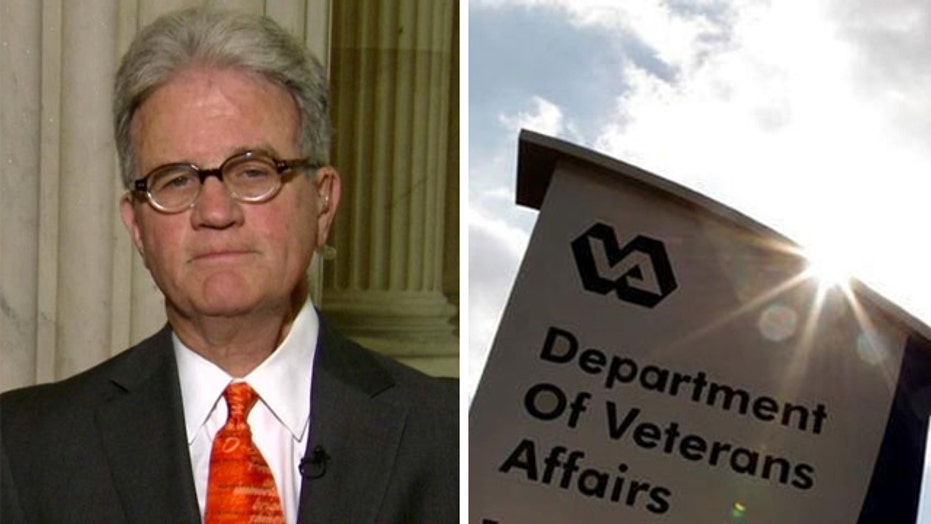 Coburn on whether Congress is making progress on VA deal

Pressure mounting on lawmakers to finalize a deal to help vets

WASHINGTON – Stung by sticker shock, members of Congress are scrambling to lower the cost of a bill to fix veterans' health care amid a growing uproar over long waits for appointments and falsification of records to cover up the delays at Veterans Affairs hospitals.

At the same time, deficit hawks are on edge about letting veterans turn more to providers outside the VA for health care could cost far more if Congress, under pressure from powerful veterans groups, decides to renew that program rather than let it expire in two years.

Lawmakers in both parties agree on the need to reform the Veterans Affairs Department's health care network — the largest in the country — following reports of veterans dying while awaiting appointments at VA hospitals or clinics. The resulting election-year firestorm forced VA Secretary Eric Shinseki to resign in May. A half-dozen other VA officials have resigned or retired since then.

The VA's inspector general has confirmed that at least 35 veterans died while awaiting appointments at the agency's Phoenix medical center alone, but he has yet to report on the results of investigations into whether delays in treatment were responsible for any of the deaths.

The latest analysis by the nonpartisan Congressional Budget Office estimates a Senate-passed bill would cost $35 billion through 2016 to build new clinics, hire doctors and make it easier for veterans who can't get prompt appointments with VA doctors to get outside care. The CBO put the price tag of a similar measure passed by the House at $44 billion.

More troubling for lawmakers are long-term costs. As currently designed, the legislation would relieve a big backlog of veterans awaiting appointments by letting them seek care outside the VA system, but that the expansion would expire after two years. Fiscal conservatives worried about swelling deficits fear lawmakers will yield to inevitable pressure from veterans to keep it.

"Once a benefit is provided to a large group of people it is hard to take it away, so there will be intense pressure on Congress to continue the benefit," said Ed Lorenzen of the Committee for a Responsible Federal Budget, a Washington-based group that advocates for lower deficits.

"I believe in choice and I hope that we will be able to continue to allow the policy change for choice to continue beyond the two years," said Rep. Jeff Miller, R-Fla., chairman of the House Veterans Affairs Committee. "But what we're faced with now is trying to erase the backlog that is plaguing VA and preventing veterans from getting timely access to their earned benefit of health care."

Once fully in place, the provision granting veterans easier access to private care could cost the government about $38 billion a year — almost as much as the $44 billion the government now spends annually on medical care for veterans, the budget office says.

Miller and other lawmakers have questioned the CBO estimates, saying the budget agency used faulty assumptions and did not account for provisions that would save money.

"I believe we can come up with very strong legislation at a lower cost than the initial CBO estimate," said Sen. Bernie Sanders, I-Vt., chairman of the Senate veterans panel.

Miller and Sanders co-chair a House-Senate conference committee that is trying to negotiate a compromise bill to address long patient wait times and other problems at the Veterans Affairs Department. Bills passed last month by each house would require the VA to pay private providers to treat qualifying veterans who can't get prompt appointments at the VA's nearly 1,000 hospitals and outpatient clinics or who live at least 40 miles from one of them.

The bill also would make it easier to fire or demote senior agency officials and end bonuses to senior VA executives based on meeting patient scheduling goals — a practice investigators say led some officials to create phony waiting lists to "game" the system.

The main obstacle is the bill's price tag — and how to pay it. The Democratic-controlled Senate treats the issue as an emergency and would allow virtually unlimited spending. The House bill, written largely by Republicans, requires Congress to appropriate money each year under existing budget caps for the overhaul. The cost would have to be covered through either higher taxes or cuts in other programs.

Costs also could spike depending on the rate VA pays private providers, the CBO said. The Senate bill would allow veterans who can't get timely VA appointments to see doctors listed as providers under Medicare or the military's TRICARE program. The House bill does not specify who would provide the care or the rates they would be paid.

More than 8 million of the nation's 21 million veterans are now enrolled in VA health care, although only about 6.5 million seek VA treatment every year. The CBO analysts said the VA now covers about 30 percent, or an average $5,200, of those veterans' annual health care costs, excluding long-term care.

By making it easier to get outside care, the House and Senate bills would encourage millions of veterans who currently do not receive VA care to get it, the CBO said. Millions of currently enrolled veterans also can be expected to seek a bigger portion of their health care coverage through VA, the budget office said.

Whatever the final price tag, lawmakers also must agree on how to pay the bill's costs.

Congress will need to "go outside the VA to look for offsets" to pay for expanded care, Miller said. Sanders called the situation a crisis that deserved an emergency response — budget language for borrowing the money.

"Nobody ever said this is going to be easy," Miller said. "The Senate is locked down on it being all emergency funds. The House has a very different tack."

The VA bill "is not going to be paid for by cutting education or food stamps," Sanders said in a speech on the Senate floor. "That ain't going to happen."