Billionaire investor Wilbur Ross cited his relationship with the United Steelworkers Union, which has endorsed him for the Cabinet post, as proof that he will work to protect American jobs.

"I'm pro-trade. But I'm pro-sensible trade, not trade that is detrimental to the American worker and to the domestic manufacturing base," Ross told the Senate Commerce, Science and Transportation Committee.

"I think I've probably had more direct experience than any prior cabinet nominee has had with unfair trade in the steel business, in the textile business, in the auto parts business and other sectors," Ross said.

Worth an estimated $2.9 billion, Ross has extensive business ties around the globe. Supporters say that makes him ideal to represent American business interests abroad.

"I believe his extensive management experience in the private sector, and his understanding of the challenges faced by workers and businesses alike, will equip him well for the job of leading the Department of Commerce," said Sen. John Thune, R-S.D., the committee chairman.

During Ross' hearing, Thune revealed that Ross had a household employee from 2009 to 2016 who could not provide documentation that he or she was in the U.S. legally.

"We did the best that we thought we could do in order to verify the legality of the employment and it turned out that was incorrect," Ross said. "But we did pay all the withholdings, so did that employee."

Such transgressions have derailed cabinet nominees in the past. But Sen. Bill Nelson of Florida, the top Democrat on the committee, questioned Ross only briefly about it.

Trump has said Ross will play a big role in American trade policy. Trump's views on trade are at odds with many congressional Republicans. He has pledged to re-negotiate existing trade deals and scrap a pending one with Asian countries.

Ross said the North American Free Trade Agreement, involving the U.S., Canada and Mexico, "is logically the first thing for us to deal with."

"That will be a very, very early topic in this administration," Ross added.

The commerce secretary has several roles in promoting American business interests in the U.S. and abroad. The department works on trade issues, working to attract foreign investment in the U.S. The department also oversees agencies that manage fisheries, weather forecasting and the Census Bureau, which will conduct a census in 2020.

Ross said he has unique experience at that agency; he was a census-taker while he attended business school.

Unlike the president-elect, Ross has agreed to divorce himself from a vast financial empire.

Ross has signed an ethics agreement with the Office of Government Ethics. In it, he agrees to divest from 40 different businesses and investments within 90 days of being confirmed. He agreed to divest from 40 more within 180 days.

Among the businesses he will separate himself from is WL Ross & Co., the private equity firm he founded in 2000.

Trump has had a run-in with the head of the ethics agency because he says he won't completely divest himself from his business empire. Instead, Trump says he will turn control of his business over to his sons.

Nelson praised Ross for divesting from most of his personal holdings.

"I believe that's the right thing to do and it tells me you're committed to doing the job the right way by placing the public's interests ahead of your own," Nelson said. "It's my hope that President-elect Trump will follow your lead and the example you set." 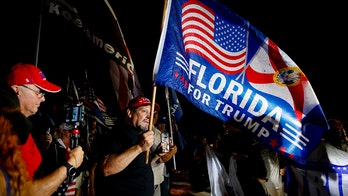