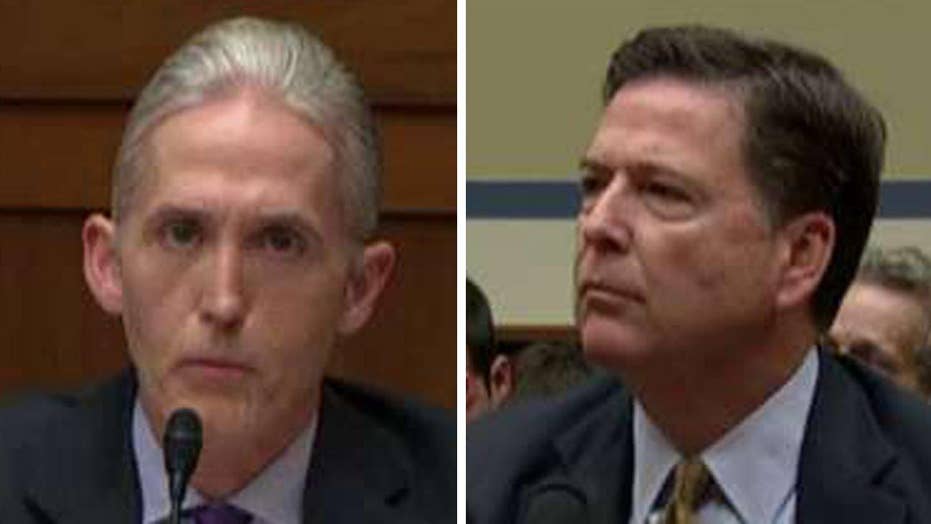 FBI Director James Comey testified Thursday that Hillary Clinton’s claims -- some made under oath -- about her use of a private email server were “not true,” fueling Republican questions about whether in doing so she committed a felony.

In a wide-ranging appearance before the House oversight committee, Comey also said Clinton’s email practices put America’s secrets at risk and her actions constituted the “definition of carelessness.”

At the same time, Comey staunchly defended the bureau’s decision not to pursue charges. He also said, “We have no basis to conclude that [Clinton] lied to the FBI.”

Yet he acknowledged that lying under oath is a felony, as some Republicans point to statements she made last October before the House Benghazi committee -- and plan to request an investigation. At that hearing, Clinton had claimed that nothing she sent or received was marked classified.

Comey was asked about such claims, which she also made publicly, in a pointed exchange with Rep. Trey Gowdy, R-S.C.

“That’s not true. … There was classified material emailed,” Comey said.

On her claim that she used one device, Comey also said, “She used multiple devices.”

Democrats on the committee tried to make the case for Clinton that she may not have noticed or understood the classified markings in a few emails that bore them, bolstering any claim of plausible deniability. Comey indeed said there is a question over whether Clinton was “sophisticated enough” to know at the time what a particular classified marking signified.

Fox News was first to report on a 2012 email that carried a classified code known as a “portion marking” when it was sent to Clinton’s account.

While the hearing was underway, Clinton herself was hunkered down at her Washington home – as her campaign responded regularly to hearing highlights. The campaign flagged that Comey acknowledged during the hearing that the portion markings themselves were not properly marked.

But Gowdy and House Oversight Committee Chairman Jason Chaffetz, R-Utah, whose committee hosted the tense hearing with Comey just two days after the investigation decision, both suggested a “double standard” was at play in the FBI decision.

“It seems to a lot of us that the average Joe … if they had done what you laid out in your statement, that they’d be in handcuffs,” Chaffetz said. “And I think there is a legitimate concern that there is a double-standard -- if your name isn’t Clinton or you’re not part of the powerful elite, that lady justice will act differently.”

Chaffetz voiced concern that there “does seem to be no consequence.”

Yet Comey repeated his claim that “no reasonable prosecutor would bring this case.” He said while Clinton showed “great carelessness,” he did not see evidence she and those with whom she corresponded “knew when they did it they were doing something that was against the law.”

He said no reasonable prosecutor would bring a case based only on what is known as “gross negligence.” At the same time, he suggested that if Clinton had worked at the FBI, she could be subject to a range of disciplinary measures including suspension or termination.

“You could be walked out,” he said.

Comey also denied a double standard was at play, saying no one at the DOJ would have brought such a case against “John Doe or Hillary Clinton” based on the facts.

Democratic committee members slammed the hearing and described the criticism of Comey as political.

“Amazingly, some Republicans who were praising you just days ago … instantly turned against you,” Rep. Elijah Cummings, D-Md., said. “In their eyes you had one job and one job only -- to prosecute Hillary Clinton.”

On another front, Comey also addressed claims by Romanian hacker “Guccifer” that he breached Clinton’s personal server. The hacker, Marcel Lehel Lazar, had told Fox News earlier this year that he easily accessed the server – but Comey said that when questioned, Guccifer admitted he lied about the breach.

Toward the end of the hearing, Comey would not answer directly when asked whether the FBI is investigating the Clinton Foundation. He also said Clinton gave individuals who were not cleared access to classified material – though a campaign spokesman countered that the attorneys who sorted through the emails had “Top Secret-level clearance.”

The hearing comes as Republicans turn up the pressure on both Comey and Clinton in the wake of the FBI recommendation not to pursue charges in the email case. Attorney General Loretta Lynch, after receiving Comey’s recommendation, on Wednesday declared the investigation over with no criminal charges issued.

House Speaker Paul Ryan, R-Wis., now wants Comey to release all of the unclassified findings from the agency’s investigation.

“Right now, there are simply too many unanswered questions,” Ryan wrote in a letter to Comey. “… The American people deserve to know exactly what your investigation uncovered and why the FBI came to the decision to recommend that no criminal charges be brought against Secretary Clinton.”

Ryan also sent a letter to Director of National Intelligence James Clapper urging him to deny Clinton access to classified information “for the duration of her candidacy for president.”

“I firmly believe this is necessary to reassure the public that our nation’s secrets are secure,” he said.

The Clinton campaign is hitting back repeatedly at Republicans, with a  top spokesman calling the bid to deny her access to classified information a “stunt” and the campaign saying Republicans had voiced “nothing but confidence” in Comey before his announcement earlier this week.

But Comey's decision, and the way he delivered it, infuriated Republicans who felt that the FBI director in his unusually detailed and critical televised statement Tuesday had laid out a sufficient basis for prosecution.

In a stinging assessment of her email practices as secretary of state, Comey rebuked Clinton and her aides for being "extremely careless" in their handling of classified information and contradicted many of the defenses and explanations she's put forward for months. But he also said there was no evidence anyone willfully or intentionally mishandled classified information.

Comey, who served as deputy attorney general in the George W. Bush administration, was appointed in 2013 to a 10-year term as FBI director by President Barack Obama.