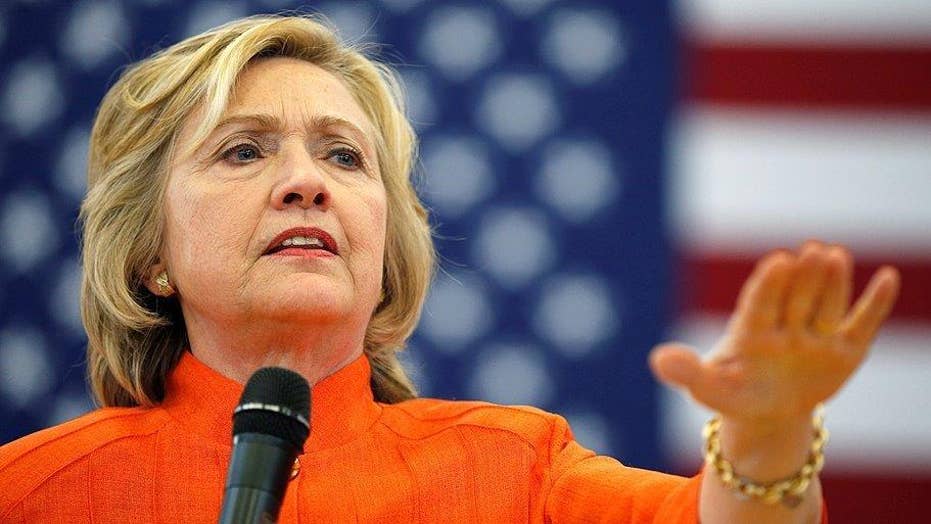 Could a probe of Hillary's email server be reopened?

James Comey's firing and new FBI leadership could spark a new review of the 'closed' Clinton case, immunity deals. Could Pres. Trump still get a chance to 'lock up' Clinton? #Tucker

President Trump’s decision to fire James Comey touched off widespread speculation in Washington over what will happen to the FBI’s Russia meddling probe – but the prospect of new leadership at the bureau also could hold implications for the ‘closed’ Hillary Clinton email case.

Brian Weidner, a veteran former FBI agent, suggested both the case and the immunity deals struck during that investigation could be revisited.

"I would be surprised if they did not review all the investigations regarding HRC and come up with [a] conclusion regarding prosecution. The statute of limitations hasn't come into play yet," he said in an email to Fox News.

As for the immunity deals struck with key players in the Clinton orbit, he noted those deals are “with the government, so in theory it wouldn't change.”

However, he wrote, “a new AG and new director may take a good look at the entire case, and if anyone who received immunity did not live up to their agreement, like Huma [Abedin] with the classified documents on her computer, the deal is off and they are potential targets again.”

For dozens of current and former agents, the key factor will be who is the next director of the world’s most powerful law enforcement agency.

Does Trump pick from the FBI ranks or opt for a more political choice?

"No one can figure out how this POTUS [president of the United States] operates," one former agent connected to the Clinton email probe said.

While Democrats allege Trump fired Comey because of his discomfort with the probe of Russian interference in the 2016 campaign and potential ties to Trump associates, the stated reason for the ouster was Comey’s handling of the Clinton email probe last year. A detailed memo from Deputy Attorney General Rod Rosenstein faulted Comey for announcing his findings last July, going around his boss, then-Attorney General Loretta Lynch, and for making public a decision to revisit the case shortly before the election.

Krongard described it as “the granting of immunity to five senior Clinton aides for virtually nothing in return.”

He said this is “normally done in return for a proffer of evidence or testimony which will build a bridge from one level to a higher level; in this case, the immunity grants built a moat around the higher level, not a bridge.”

Krongard stressed that the FBI’s interview with Clinton, “the highest level person and ultimate person of interest in the investigation” was held on July 4 weekend, “when the investigation had to have been virtually complete."

It also still baffles Krongard why Mills – a participant in the use of Clinton’s private email systems to send and receive classified messages – "was allowed to be present during the interview [with Clinton] and even to act as counsel."

There is no shortage of criticism surrounding other aspects of that investigation.

A former FBI agent familiar with the counterintelligence investigation into Clinton's use of non-secure email devices and servers told Fox News that "no stone was unturned” in the probe but alleged the process was deliberately "slowed down" by Clinton’s personal attorney David Kendall.

“We got everything we needed, but it was more painful than it needed to be,” the source said. “We would draft up search warrants for the servers in both residences -- then the process would be slowed down. It was like Step 1 and a pause, Step 2 and a pause.”

The source said coordinating with Kendall bothered him and others, saying, “Only when we threatened with the search warrants, something would be given up.”

The source said, "It was so much harder than it should have been."

Rosenstein, in his memo, used the word "wrong” to describe Comey's handling of the conclusion of the criminal investigation into Clinton's use of private email servers and a private email account for all government business while she served as secretary of state.

"The way the director handled the conclusion of the email investigation was wrong," Rosenstein wrote, specifically noting that, "the director announced his own conclusions about the nation's most sensitive criminal investigation without the authorization of duly appointed Justice Department leaders."

The source, though, asserted that Comey “wanted to protect then-Attorney General Lynch."

Lynch at the time was under fire for meeting in late June 2016 with former President Bill Clinton on a Phoenix tarmac.

Eight days later, Clinton appeared for her official FBI interview at the Washington Field Office. The next day, Comey held his press conference proclaiming no criminal charges would be brought against Clinton despite her being "extremely careless" with the handling of highly classified materials while serving as the secretary of state.