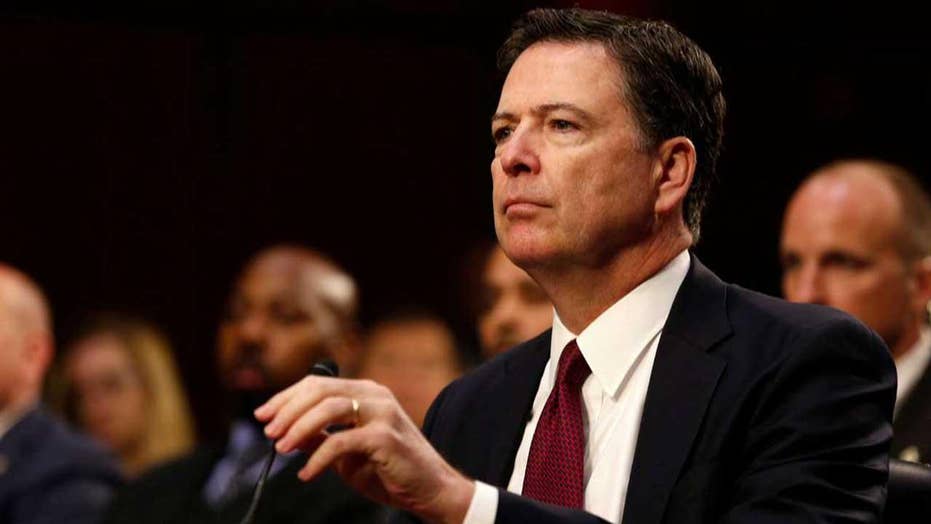 Originally Comey accused the former secretary of state of being “grossly negligent” in handling classified information in a draft dated May 2, 2016, but that was modified to claim that Clinton had been “extremely careless” in a draft dated June 10, 2016.

Comey stuck to that modified language when he announced in July 2016 that there would be no charges against Clinton.

Federal law states that gross negligence in handling the nation’s intelligence can be punished criminally with prison time or fines, according to The Hill, which first reported on the memos.

“There is evidence to support a conclusion that Secretary Clinton, and others, used the email server in a manner that was grossly negligent with respect to the handling of classified information,” one of Comey’s earliest drafts states.

According to The Hill, that draft was later changed in red-line edits to conclude that the handling of 110 emails of classified information that were transmitted by Clinton and her aides over her unsecured personal email server was “extremely careless.”

“Although Director Comey’s original version of his statement acknowledged that Secretary Clinton had violated the statute prohibiting gross negligence in the handling of classified information, he nonetheless exonerated her in that early, May 2nd draft statement anyway, arguing that this part of the statute should not be enforced,” Grassley wrote in a letter today to current FBI Director Christopher Wray.

A case agent looking into Clinton’s emails previously told Fox News that Comey had insisted investigators find “intent” for prosecution. ”Gross negligence” under the statute does not require intent.

A former FBI agent with decades of national security experience reacted: “I along with many retired FBI Agents are very disappointed with the disrepute that Comey's handling of the Clinton mishandling of classified information brought upon the Bureau. This cheapens the sacrifices of our friends and colleagues who died in the FBI. These drafts would have been on FBI Computers. Therefore, I would like to know when Comey [got] these emails and was there anyone in the FBI complicit in delaying their disclosure to Grassley?”

Fox News previously reported in October that nine days after Comey took the unusual step of circulating a draft to his inner circle laying the groundwork to recommend against charges in the Clinton email case, Comey insisted that there are “no special set of rules” for anyone under the bureau’s scrutiny.

During a May 11, 2016 briefing for reporters at FBI headquarters in Washington, D.C., Comey was pressed by Fox News on whether the law for mishandling classified information would be applied equally to then-candidate Clinton and her team.

His comment of denial about special treatment for Clinton appeared to pose another conflict for Comey, as lawmakers have pressed the former FBI boss — who was fired by President Donald Trump on May 9 — to address public discrepancies in his past statements about his handling of the Clinton case.

FBI records — titled “Drafts of Director Comey’s July 5, 2016 Statement Regarding Email Server Investigation Part 01 of 01” — confirmed that Comey drafted a statement on the Clinton case two months before interviewing her and eventually recommending no criminal charges.

The contents of the emails are unclear because most of the material was redacted.

However, the now-public records show an email titled, “Midyear Exam — UNCLASSIFIED” was sent by Comey on May 2, 2016 to Deputy Director Andrew McCabe, General Counsel James Baker and James Rybicki, then chief of staff and senior counselor.

Fox News previously reported that Trump accused Comey of having “totally protected” Clinton in the 2016 presidential election in a series of tweets.