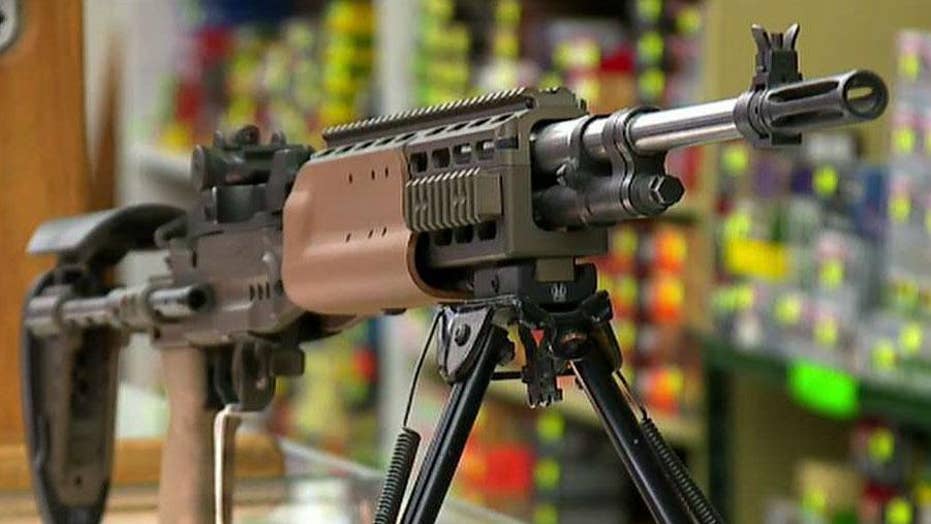 Colorado's attorney general testified last week that county sheriffs vowing not to enforce the state's proposed anti-gun "red flag" bill should "resign" -- a challenge that threatened to ramp up tensions between state officials and local leaders who were already creating droves of so-called Second Amendment "sanctuary counties" to resist the legislation.

Democrat Phil Weiser made the remarks, which were first reported by The Colorado Sun, while testifying before a state committee on Friday. Weiser has said that the red flag legislation, which would permit a court to the seizure of weapons from people determined to be a threat to others or themselves, would save lives, particularly in domestic violence situations.

In a statement to Fox News on Wednesday, Weiser stopped short of repeating that challenge, but urged sheriffs to raise their concerns in a "proper venue."

"During my testimony last Friday, I was asked what would happen in the likely event that our courts declare the ['red flag'] law to be constitutional and valid, but a law enforcement officer still refuses to enforce a valid judicial order pursuant to such a constitutional law," Weiser said. "My experience with our law enforcement officials is that they take their oath to enforce the law very seriously. I am confident that Colorado’s law enforcement officials will honor validly issued judicial mandates implementing constitutionally valid laws. If any individual wishes to oppose the enactment of a law, then the right forum is the legislature. If anyone wants to challenge a law as unconstitutional, that is their right, and the proper venue for such a challenge is our courts.”

The proposed state law, House Bill 1177, is expected to secure passage in the Colorado legislature and be approved by the state's Democrat governor, Jared Polis. It says petitioners, under oath, must establish by a "preponderance of the evidence" -- a relatively lax legal standard essentially meaning that something is "more likely than not" -- that a person "poses a significant risk to self or others by having a firearm in his or her custody or control or by possessing, purchasing or receiving a firearm."

An emergency hearing must then be held within 24 hours, and if an "extreme risk protection order" (ERPO) is issued by a judge, an individual will be barred from "possessing, controlling, purchasing or receiving a firearm for 364 days," and must "surrender all of his or her firearms and his or her concealed carry permit."

Defendants can successfully override the ERPO only by establishing by "clear and convincing evidence" -- a burdensome legal standard  -- "that he or she no longer poses a significant risk of causing personal injury to self or others."

“Because ERPO will be constitutionally upheld, every sheriff will be required and, I believe, will follow through to uphold an act under that law," Weiser told the state Senate panel.

Several other states are considering similar red flag laws, and counties in states as far apart as New Mexico and Illinois have responded by creating Second Amendment sanctuaries, leading to court challenges. But Weiser's comments were perhaps the most direct repudiation by state officials of local leaders who have resisted their gun control efforts.

Conservatives have said Colorado's legislation should focus more on providing mental health services, and they warn that the bill would only discourage distressed individuals from seeking help. Legislators, critics say, should work instead on expanding and improving the state's existing provisions for 72-hour mental health holds.

"The criteria for a 72-hour hold is you are a danger to yourself and others,” Assistant State Senate Minority Leader John Cooke, a Republican and former sheriff, told The Colorado Times. “Well, that’s what this bill is saying, too — to come in and take your guns. But the problem is you leave the person at the house. It’s gun confiscation, and it’s really short on mental health. So, if you’re going to take the gun, you ought to take the person instead if they are that dangerous.”

NRA'S DANA LOESCH RIPS CNN'S AWARD FOR TOWN HALL IN WHICH SHE WAS HECKLED, RUBIO WAS COMPARED TO SERIAL KILLER

“If you pass an unconstitutional law, our oaths as commissioners or myself as the sheriff — we’re going to follow our constitutional oath first,” Reams, whose county commissioners recently voted to become a Second Amendment "sanctuary," told Fox News. “And we’ll do that balancing act on our own.”

On Wednesday afternoon, commissioners in Logan County, Colo., became the latest officials to pass such a sanctuary measure. The vote among commissioners was unanimous.

"It's time we quit trying to put lipstick on a pig and start funding our mental health facilities, instead of trying to take the rights from our people," Logan County Sheriff Brett Powell said in public remarks prior to the vote.

He added that law enforcement searches are traditionally only acceptable during criminal investigations.

Illinois Democrats want to pass a new bill that would make gun buyers share their pubic social media accounts to police before granting them a firearm license. The bill’s proponents point to Nikolas Cruz, the Parkland High School shooter, and Robert Bowers, the Pittsburgh Synagogue shooter, who both posted troubling comments before going on a rampage and killing innocent people.

"In Colorado, it's not a crime to harm yourself," Powell said.

According to a list compiled by Rally for Our Rights, a nonprofit, 22 Colorado counties have become "Second Amendment sanctuaries" in the last month, including El Paso County, among the state's largest.

El Paso last week vowed to fight the Colorado measure in court if needed, and pledged not to “appropriate funds, resources, employees, or agencies to initiate unconstitutional seizures in unincorporated El Paso County." The county affirmed its "support for the duly elected Sheriff of El Paso County, Colorado and collaborate with the Sheriff to refuse to initiate unconstitutional actions against citizens."

“I would ask Governor Polis to refuse to sign it,” VanderWerf said, “because of the unconstitutionality of the bill as presently written. No governor or senate should willfully sign into law or pass legislation that are violations of a set of documents that protect our rights.”