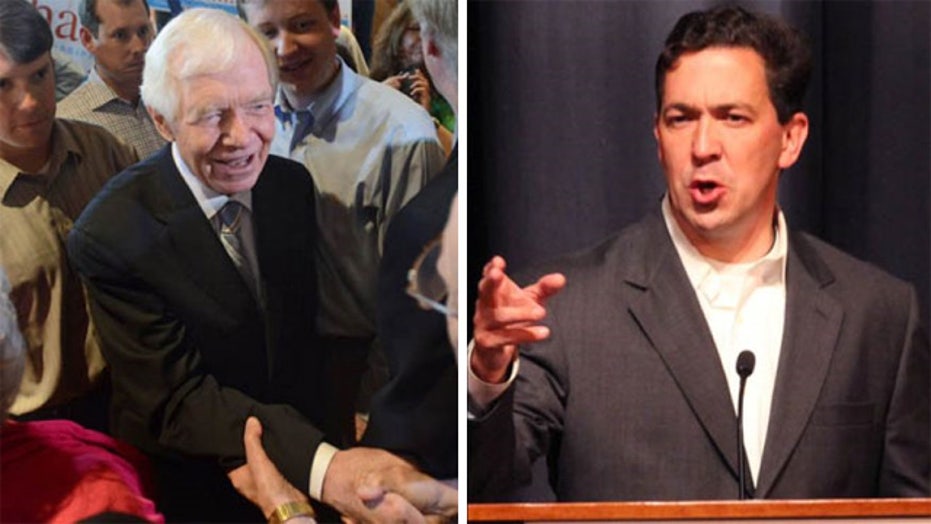 Will tough GOP primary open door for Dems in Mississippi?

Insight from Bob Cusack, managing editor for The Hill

The 76-year-old Cochran, the former Senate Appropriations Committee chairman who has steered billions of dollars back home, is locked in a tight race against the tea party-backed McDaniel, who was born the year Cochran came to Washington as a congressman. When no clear winner emerged from the June 3 primary, it forced a three-week campaign dash marked by bitter charges.

The runoff is the headline race on a busy day of primaries in New York, Oklahoma, Maryland, Colorado and Utah. A special election in Florida will fill the U.S. House seat once held by Rep. Trey Radel, who resigned in January after pleading guilty to cocaine possession.

In New York, Democratic Rep. Charles Rangel, 84, a Korean War veteran who survived House censure in 2010 over financial wrongdoing, is seeking a 23rd term. State Sen. Adriano Espaillat, a Dominican-born legislator who lost by fewer than 1,100 votes in the 2012 primary, poses the toughest challenge in the majority Hispanic district that includes Harlem.

In closing arguments in Mississippi, Cochran backers portrayed him as experienced and a reliable ally for veterans and the military.

McDaniel, in a swipe at Cochran and McCain in a last-minute fundraising appeal, criticized the "outrageous spending sprees" by the two establishment senators. He pledged to stand with true conservatives like Sens. Ted Cruz of Texas and Mike Lee of Utah.

Outside groups, from tea party organizations to the U.S. Chamber of Commerce, have spent some $12 million on the race. Cochran appealed to Democratic voters -- white and black -- to cross over and back him, prompting tea partyers to promise to send observers to the precincts.

Conservative purists and the tea party movement, born five years ago in the divisive fight over federal government spending and President Barack Obama's health care law, have had more losses than wins this election cycle, although the triumphs have rattled Washington.

The Mississippi runoff is one of several internecine GOP contests.

In Oklahoma's Senate primary, two-term Rep. James Lankford, a member of the House Republican leadership, is battling T.W. Shannon, who was the state's first black House speaker and is a member of the Chickasaw Nation. National tea party groups and the Senate Conservatives Fund have backed Shannon, who also has the support of Sarah Palin and Cruz.

The winner in the solidly Republican state will replace Sen. Tom Coburn, who was diagnosed with a recurrence of prostate cancer. Coburn said a desire to focus on other issues, not his health, was the reason he was retiring with two years left on his term.

Lankford and Shannon could emerge from the crowded primary as the two candidates in an Aug. 26 runoff.

National Republicans are nervously eyeing Colorado's four-way gubernatorial primary, which includes 2008 presidential candidate Tom Tancredo, an unapologetic opponent of immigration whose presence at the top of the ticket could undercut GOP prospects in November's Senate and House races.

In Florida, voters in a strongly Republican district choose a replacement for Radel. Republican Curt Clawson, a former CEO of an aluminum wheel company, is favored to win against Democrat April Freeman and Libertarian Ray Netherwood.