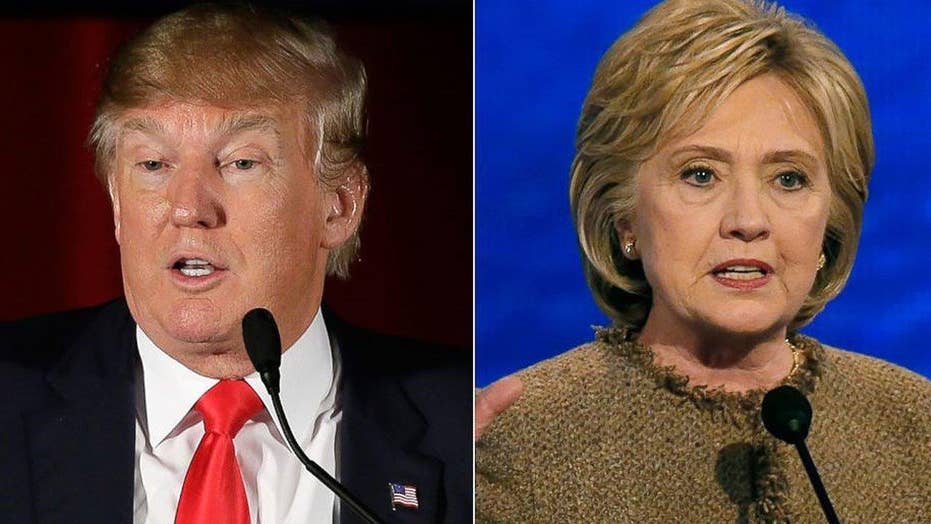 Hillary Clinton and Donald Trump on Labor Day barnstormed through America’s industrial heartland appealing to workers with promises of better-paying jobs and a return to prosperity -- in a White House race so competitive now that their entourages shared the same airport tarmac and roadway in battleground Ohio.

“It's kind of interesting to have all the planes here on the same tarmac. Just shows you how important Ohio is. We're going to be here a lot," Democratic vice-presidential nominee Virginia Sen. Tim Kaine told Clinton after she flew into Cleveland, using a campaign plane for the first time this election cycle.

Clinton used the plane -- a Boeing 737 with about 100 seats for passengers and crew -- to take several questions from some of the roughly 40 reporters onboard, amid criticism she is largely avoiding the news media.

She addressed the issue of saying dozens of times that she couldn’t recall specific information or events when the FBI interviewed her in July about her use of a private computer server while secretary of state, according to recently released FBI notes.

“The fact that I couldn’t remember certain meetings doesn’t affect the commitment I had to the treatment of classified material,” Clinton said.

She also said she was “really concerned” about recent reports and other indications that the Russian government might be trying to interfere with the White House race.

And she said she was unaware that aides had erased 23 days of emails, after revelations about the private server became public.

By the end of the day, Clinton and her Democratic presidential team made stops in Illinois, Michigan, New Hampshire, Ohio and Pennsylvania.

“You see the crowds,” Trump told Fox News at a fair in Canfield, Ohio. “We're going to bring jobs back.”

Clinton got off to a rough start at her first event, in Cleveland, suffering through a coughing spell, telling supporters, “Every time I think about Trump I get allergic.”

“If Tim and I are elected, we’re going to stop the attacks on unions,” continued Clinton, who was joined on stage by AFL-CIO President Richard Trumka. “We’re going to bring jobs back to Ohio.”

Earlier in the day, Kaine teamed up with Vice President Biden at Pittsburgh’s annual Labor Day parade, in the Clinton campaign’s effort to ensure union support turns into union votes in November.

“We have to make sure labor is right there with us,” said Kaine, arguing organized labor’s efforts have increased wages for all U.S. workers. “Nobody understands team work like organized labor.”

Biden took the stage next, telling the crowd: “I work for Hillary Clinton. … Unions have built this country.”

The Clinton-Trump race has gotten closer over the past weeks, according to recent polls.

Her numbers dropped amid the FBI report and more revelations about the level of access Clinton Foundation donors had to the State Department while and after Clinton ran the agency from 2009 to 2013.

However, Trump also trails in essentially all of the of so-called battleground states that will largely decide the race -- including Colorado, Florida, Ohio, North Carolina, Pennsylvania and Virginia.

Clinton unveiled the campaign plane amid criticism she has not held a full-fledged press conference in roughly 275 days to talks about the emails, the foundation and other issues.

At Trump and Pence’s first stop, a round-table discussion with union members, Trump, a wealthy businessman, warned that America's manufacturing jobs are "going to hell."

Trump also appeared with Democratic Mayor Tom Coyne, of Brook Park, Ohio, who said he supported Trump in this spring's Republican primary and would vote for him this fall.

"The mayor today is just one example of what's happening across this country," Trump campaign manager Kellyanne Conway said. "Voters who traditionally have not voted Republican or haven't even voted in a very long time seem to be coming out to support this messenger and this message."

As he left Cleveland for his next stop in Youngstown, Trump extended a rare invitation to a handful of journalists on his private jet, and said that "on occasion," he will invite journalists to travel with him.

"It doesn't have to be all the time," he added.

No Republican has won the White House without winning Ohio and Trump is trying to overcome some splintering in the state party, which was supportive of Ohio Gov. John Kasich during the presidential primary.

While Labor Day has traditionally been the kickoff to the fall campaign, both Clinton and Trump have been locked in an intense back-and-forth throughout the summer.

Clinton has questioned Trump's temperament and preparation to serve as commander in chief while seeking to connect the reality television star to the extreme "alt-right" movement within the Republican Party.

Trump visited a predominantly black church in Detroit on Saturday in a rare appearance with minority voters, aiming to counter Clinton's argument to moderate and suburban voters that he has allowed a racist fringe to influence his candidacy.

The start of full-fledged campaigning opens a pivotal month, culminating in the first presidential debate on Sept. 26 at Hofstra University in Hempstead, New York. Polls show Trump trailing Clinton in a series of must-win battleground states, meaning the debates could be his best chance at reorienting the race.

Clinton will have millions of dollars at her disposal this fall to air television advertising and power a sophisticated get-out-the vote operation in key states.

The former secretary of state raised a combined $143 million in August for her campaign, the Democratic National Committee and state parties -- her best month yet.

She began September with more than $68 million in her campaign's bank account to use against Trump, who has not yet released initial fundraising totals for August.