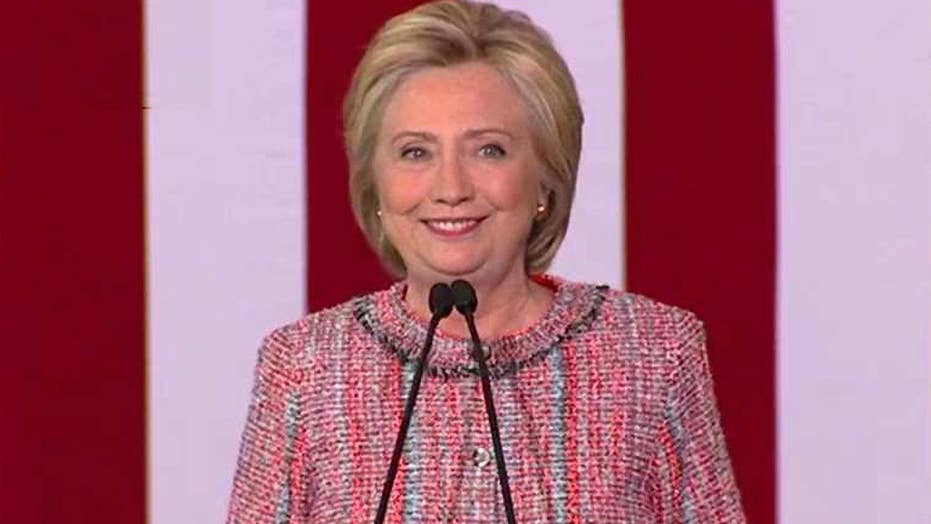 Clinton: Great to be back on the campaign trail

Democratic presidential nominee tells supporters in Greensboro, North Carolina that time off allowed her reflect on the campaign

Hillary Clinton returned to the campaign trail Thursday after being sidelined for three days by a case of pneumonia, assuring voters she is feeling better and using her illness as a jumping off point to push her own policy prescriptions.

In an appearance in Greensboro, North Carolina, Clinton walked on stage to James Brown’s “I Feel Good” and said that her time off the trail helped her reconnect “with what this whole campaign is about.”

“A few days of rest did me good. I’m not great at taking it easy even under ordinary circumstances, but with just two months to go until election day? Sitting at home was pretty much the last place I wanted to be,” she said.

Clinton then pivoted to use her own experience to underscore the need for changes in health care and workplace policies.

“When I’m under the weather, I can afford to take a few days off, millions of Americans can’t, they either go to work sick or lose a paycheck,” she said. “Lots of Americans still don't even have insurance, or they do but it’s too expensive to actually use, so they toss back some Tylenols, they chug orange juice, hope that the cough or the virus goes away on its own.

“Lots of working parents can't afford child care, which in many states costs as much as college tuition so for millions of moms and dads, if they get sick there's no backup,” she said.

Clinton returned to the trail amid a rough spell for her campaign. She has been facing criticism for calling half of Donald Trump’s supporters “a basket of deplorables.” Her problems were compounded when she was seen stumbling from a 9/11 memorial service on Sunday. Her campaign later revealed her pneumonia diagnosis, touching off a week-long debate over both candidates’ health.

Clinton released further details about her health Wednesday, while Trump released details from his recent physical exam on Thursday, when he discussed details on "The Dr. Oz Show.”

He said that when he looks in the mirror, he sees a man much younger than his 70 years.

While Clinton has been off the trail, Trump has been climbing in several national and battleground polls.

Aside from addressing the cheering college crowd, Clinton spoke to reporters before and after the speech, taking a few questions each time. When asked about when running mate Tim Kaine knew about her illness, Clinton sidestepped, adding that she was “confident and comfortable” about her relationship with Kaine.

Trump meanwhile outlined his plan to lower taxes by $4.4 trillion over a decade and to cut regulations to increase economic growth to 3.5 percent and create 25 million jobs over the next 10 years. Trump announced the plan at the Economic Club of New York.