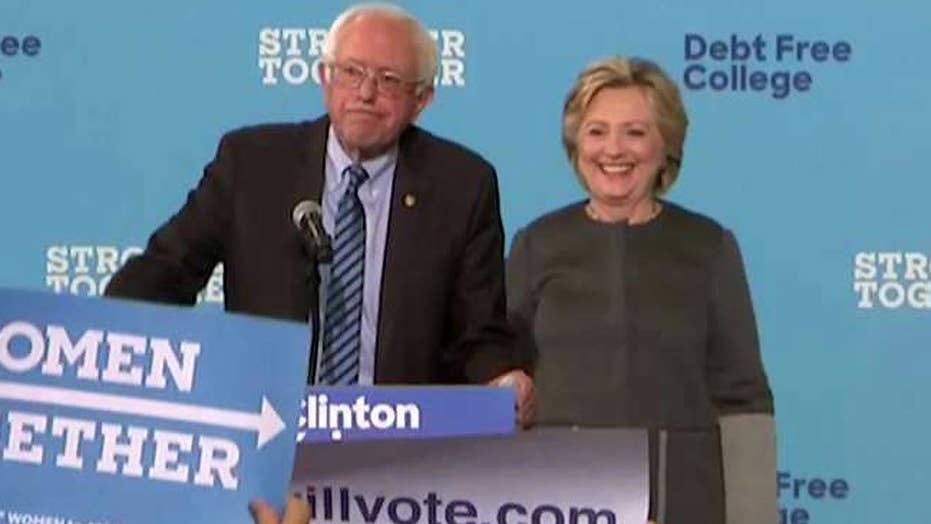 Clinton, the Democratic presidential nominee, and Sanders, a Vermont senator, made their joint pitch at the University of New Hampshire, where they touted a plan to help students pay for college and to help former students with tuition debt.

“If your kid studies hard and does well, yes he or she will be able to make it to college,” said Sanders, whose appeal to young Americans in the Democratic primary was in large part based on his promise, if elected, of free tuition at public colleges and universities. “We’re going to change the debt situation. … People should be able to refinance their debt at the lowest rate they can find.”

Clinton has struggled to connect with young voters, including college students who frequently vote Democratic and helped Barack Obama become president in 2008.

A Quinnipiac University poll released Sept. 14 shows 55 percent of likely voters 18 to 34 voting for Clinton, compared to 34 percent for Trump.

A poll released a month earlier by the university showed Clinton with 64 percent, compared to 29 percent for Trump.

“None of you have more at stake in this election than young Americans,” said Clinton, who followed Sanders onto a stage with a backdrop that read "Debt Free College."

Clinton said she wants a moratorium on repaying student debt and the debt to be “forgiven” for those who go into public or national service.

“Bernie and I are excited about what we can do together,” said Clinton, who also used the event to tout her support of other issues important to young voters, including gay rights and climate change.

Douglas Smith, a Democratic strategist and partner at Kent Strategies, said Clinton’s best effort to shore up the so-called millennial vote was her Monday night debate performance in which she “reassured them that she has plans for their future.”

He also said that trying to compare millennials’ support for Clinton cannot be compared to that for Obama.

“They are very different candidates,” he said. “Obama was 20 years younger. He was about to be the first African-American president. He presented a different tapestry for how you measure a candidate.”

Trump was also on the campaign trail Wednesday, holding an event in Council Bluffs, Iowa, where he again questioned Clinton's health and stamina and urged residents to take advantage of the state's early-voting process that starts this week.

"You see all the days off that Hillary takes? Day off, day off, day off. All of those day offs, and then she can't even make it to her car," said Trump, likely referring to Clinton stumbling while trying to get into her campaign van during a Sept. 11 memorial event, while battling pneumonia.