Hillary Clinton on Wednesday formally backed New York Gov. Andrew Cuomo in the gubernatorial race, as she tried to unite scandal-scarred Democrats at their state convention.

The endorsement for Cuomo comes as he fights to ward off a challenge from the left in the form of activist and “Sex and the City” actress Cynthia Nixon.

The party is also still reeling from the resignation of Democratic Attorney General Eric Schneiderman, who stepped down earlier this month amid allegations he assaulted four women he dated.

Clinton did not mention Schneiderman during remarks at Hofstra University, but took repeated swipes at President Trump and urged Democrats to turn out to back Cuomo -- who she said would stand up for progressive values and against the Trump administration.

“Now more than ever we need leaders who will stand up for progressive values and stand up to those who try to turn neighbor against neighbor and sow seeds of division,” the former New York senator and Democratic presidential candidate said. 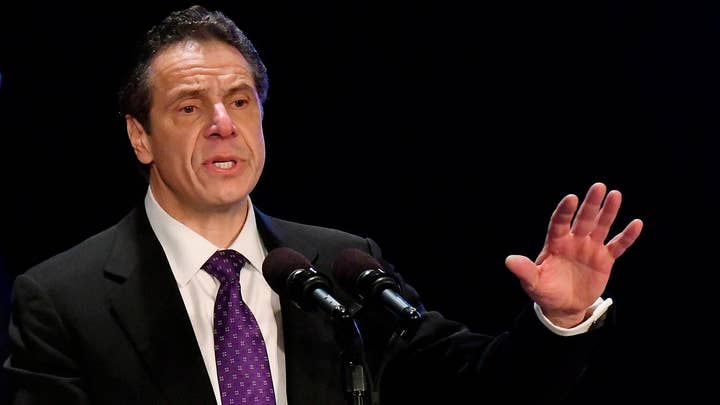 While polls show Nixon significantly behind Cuomo in the race, she has been narrowing that gap and ripping into her opponent at every juncture from the left -- accusing him of being a stealth Republican.

“I am attending the convention today because New York Democrats deserve to have at least one actual Democrat running for governor at their state convention,” she snarked on Twitter Wednesday.

Nixon has also focused much of her energy on the city’s troubled subway system -- sending the #CuomosMTA hashtag into trending territory on Twitter last week. She has also criticized him on housing, education and for not standing up enough for the rights of illegal immigrants.

“Our state is a shining example of progress that's possible when we have top, experienced Democratic leaders defending our values, standing up to an onslaught of attacks from this president and Republicans in Congress,” she said.

Nixon has picked up support from a host of left-wing groups including the Daily Kos and the influential Working Families Party. But on Wednesday, Cuomo won the backing of the convention, winning more than 95 percent of votes cast by delegates.

Nixon can still secure a place on the September primary ballot by collecting signatures from voters.