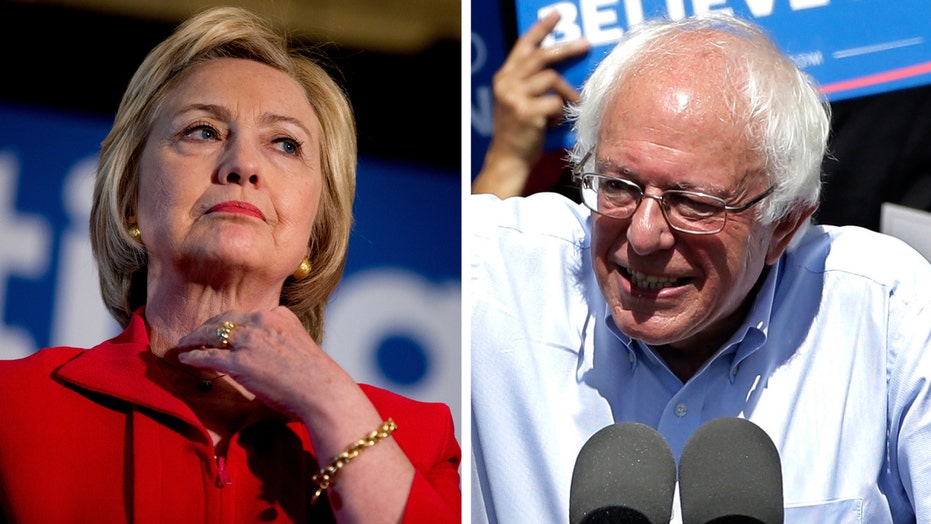 Pressure on Clinton to put Sanders away with primary wins

Preview of contests in Kentucky, Oregon

Democratic presidential front-runner Hillary Clinton again is fighting to shake off the dogged challenge posed by Vermont Sen. Bernie Sanders, whose primary success is hamstringing her efforts to shift attention and resources to fighting Donald Trump -- as the primary rivals head into the next round.

The increasingly bitter Democratic race moves Tuesday to primaries in Kentucky and Oregon.

Clinton has a nearly insurmountable lead in the delegate race and needs just 143 more to clinch the Democratic nomination. However, Sanders has won 10 of the past 15 state contests, which is inspiring him to keep his campaign going through the remaining nine contests and the party’s nominating convention in July.

Clinton is expected to do well in Kentucky, where limited polling showed her with a double-digit lead. Oregon, one of the most liberal states in the union, would appear to be Sanders territory. However, the primary is open only to registered Democrats, a situation that has hurt Sanders in other so-called "closed primary" states due to his popularity among independent voters.

While Clinton has struggled to put away Sanders, presumptive Republican nominee Trump repeatedly has hammered the former secretary of state and her husband, former President Bill Clinton. The real estate mogul recently accused Clinton of being a "total enabler" of her husband's extra-marital affairs, while calling Bill Clinton "the biggest abuser of women, as a politican in the history of our country."

Further complicating matters for the Democratic Party leadership, Trump has encouraged Sanders to pursue an indepdendent presidential run in this fall's general election.

Trump has repeatedly talked about how Sanders is being treated poorly by the party establishment, and his aides suggest he could make inroads among some of the voters who have backed Sanders' insurgent bid. Sanders himself often criticizes Trump as a racist in his stump speech, but he has said the responsibility for Democratic unity largely lies with Clinton.

Despite calls from the candidate to work together "respectfully and constructively", Sanders backers were accused of throwing chairs and making death threats against Nevada Democratic Party Chairwoman Roberta Lange. The raucous affair ended Saturday night when security at the Paris Las Vegas casino said they could no longer ensure an orderly event.

The letter, written by the state party's general counsel, warned that Sanders supporters may use similar tactics at the Democratic National Convention in Philadelphia this summer.

Clinton, for her part, has tried to preach unity. After notching a big win in Pennsylvania's primary on April 26, she said, "Whether you support Sen. Sanders or support me, there's much more that unites us than divides us."

Clinton again tried to focus attention on Trump this week, calling him a "loose cannon" at a campaign stop in Louisville Tuesday.

"I’ve never heard such reckless, risky talk from somebody about to be a nominee for president than I’ve heard from Donald Trump when it comes to nuclear weapons,” she said. “He says he would use nuclear weapons. This is scary, dangerous talk."