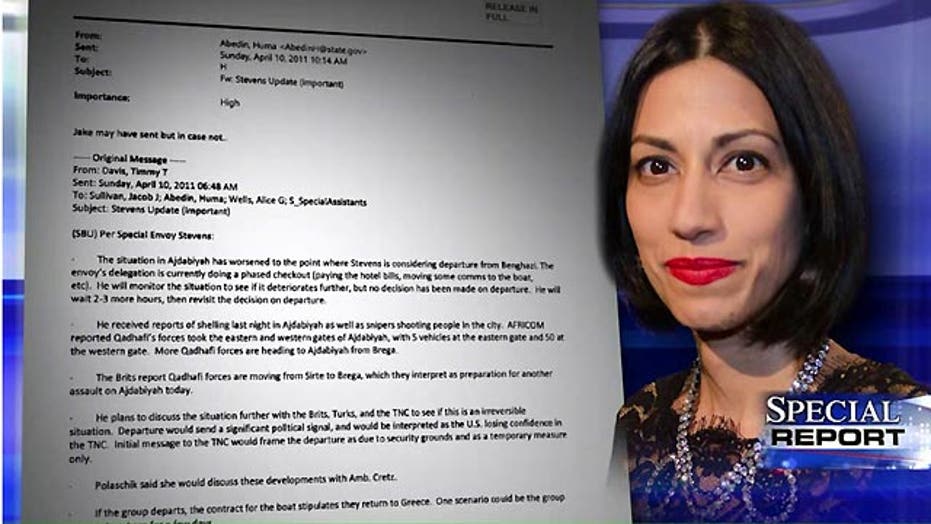 Catherine Herridge reports on the contents of the classified memos

The emails, among thousands on Hillary Clinton's personal server, were released to the Benghazi select committee in May and have been widely discussed but Fox News for the first time has identified which Clinton aides sent them and the subject matter.

The revelation came as the Democratic presidential candidate and former secretary of state tried to brush aside the burgeoning scandal, joking at a campaign event when asked by Fox News whether she had wiped her private server clean, "What, like with a cloth or something? I don't know how it works digitally at all."

Clinton last week handed the FBI her private server, which she used to send, receive and store emails during her four years as secretary of state.

Fox News has identified two of the Benghazi-related emails on the server that were deemed to contain classified information at the time they were sent.

The first was forwarded by Clinton adviser Huma Abedin and contained classified material from military intelligence sources. The 2011 email forwards a warning about how then-Ambassador Chris Stevens was "considering departure from Benghazi" amid deteriorating conditions in a nearby city. The email was mistakenly released by the State Department in full, and is now considered declassified.

The second was sent by Clinton aide Jake Sullivan and contained classified information as well as sensitive law enforcement information on Benghazi. The partly redacted November 2012 email detailed how Libyan police had arrested "several people" with potential connections to the terror attack.

Abedin and Sullivan now work for the Clinton presidential campaign. A spokeswoman for the intelligence community inspector general confirmed to Fox News that the information was classified at the time it was sent.

But Clinton campaign spokesman Brian Fallon says the information was not classified at the time the emails were sent. In maintaining this position, the campaign pointed to the fact that the State Department shared this judgment, as the Abedin email was released in full by the State Department on its FOIA website. The campaign spokesman acknowledged there is disagreement with the intelligence community inspector general.

The emails are now just a fraction of those under review by the intelligence community. On Tuesday, while Clinton joked about her server's apparently missing contents, Fox News has learned the FBI is aggressively trying to recover the data.

An intelligence source familiar with the review told Fox News that FBI investigators are confident they may be able to recover some of the deleted files, a detail first reported by NBC News.

Yet at the contentious press conference on Tuesday, Clinton insisted anything she did with her email server was "legally permitted."

In the press conference following a Las Vegas town hall meeting Tuesday, Fox News' Ed Henry pressed the Democratic presidential candidate by pointing out that leadership is about taking responsibility.

"Look, Ed, I take responsibility," Clinton replied. "In retrospect, this didn't turn out to be convenient at all and I regret that this has become such a cause celebre. But that does not change the facts. The facts are stubborn -- what I did was legally permitted."

The FBI is holding Clinton's server in protective custody after the intelligence community's inspector general raised concerns recently that classified information had traversed the system.

Clinton told reporters she was "very comfortable that this will eventually get resolved and the American people will have plenty of time to figure it out."

When asked whether she oversaw the process to wipe the server clean, Clinton said, "my personal emails are my personal business. Right? We went through a painstaking process and through 55,000 pages we thought could be worth relating," she continued. "Under the law, that decision is made by the official. I was the official. I made those decisions."

As she departed the room, a reporter asked whether the email scandal will ever end, Clinton turned to reporters shrugged and said, "Nobody talks to me about it other than you guys." 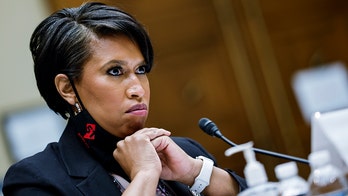 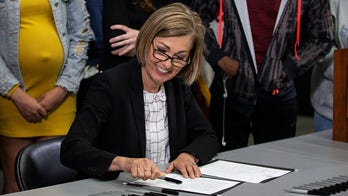