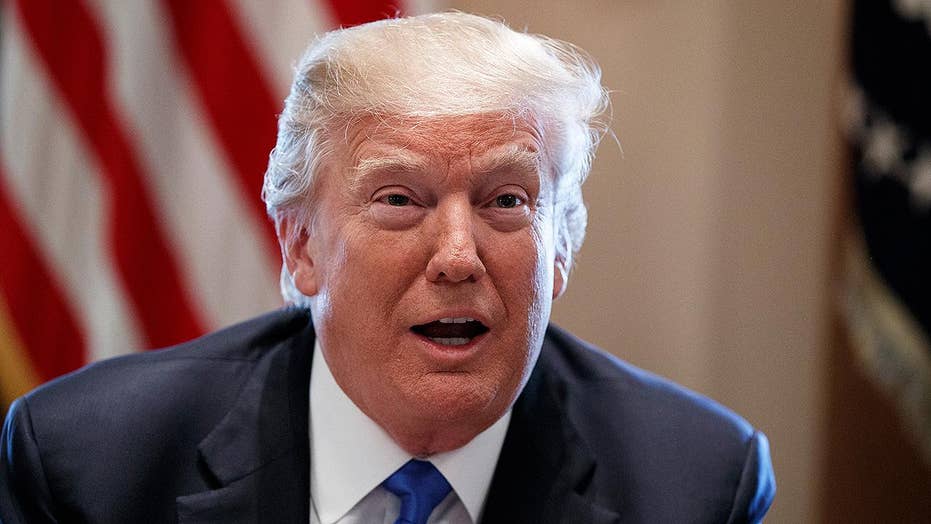 Justice Clarence Thomas, in a concurring opinion released Tuesday, called for reversing decades of jurisprudence that has made it harder for public figures to sue media outlets and other organizations for defamation -- restrictions that were premised, he said, on a series of "policy-driven decisions masquerading as constitutional law."

Thomas' opinion comes against the backdrop of President Trump's repeated calls to make it easier to sue for defamation. Last weekend, Trump reacted to a "Saturday Night Live" skit about his southern-border emergency declaration by asking on Twitter, "How do the Networks get away with these total Republican hit jobs without retribution? Likewise for many other shows? Very unfair and should be looked into."

And last December, Trump wrote on Twitter: "Isn’t it a shame that someone can write an article or book, totally make up stories and form a picture of a person that is literally the exact opposite of the fact, and get away with it without retribution or cost. Don’t know why Washington politicians don’t change libel laws?"

The remarks also come as attorneys representing the Kentucky high school student involved in a confrontation that went viral on social media last month announced Tuesday that they were suing The Washington Post for $250 million in compensatory and punitive damages for defamation. The students could be determined to be limited public figures due to their high-profile media exposure.

Trump has sought elimination of the high "actual malice" standard that politicians and public figures must meet in order to prove they have been defamed by media organizations and other entities. In his opinion, Thomas argued at length that Trump's burden in such cases is indeed unfair.

Ordinarily, to prove defamation has occurred, a private individual only has to to show that a defendant negligently failed to exercise reasonable care in spreading a provable falsehood that has harmed his reputation. But in 1964, the Supreme Court ruled in New York Times Co. v. Sullivan that public officials must meet a higher "actual malice" burden. This means they must prove that the defendant spread a falsehood either intentionally or with reckless disregard for the truth.

The high court's ruling, which came amid a surge of politically motivated lawsuits by Southern political officials, unilaterally struck down the common law on defamation that was employed by each of the states and inherited from Britain.

"The common law of libel at the time the First and 14th Amendments were ratified did not require public figures to satisfy any kind of heightened liability standard as a condition of recovering damages," Thomas wrote.

In finding a constitutional basis for its ruling superseding that common law, the Sullivan court relied heavily on opposition by the founding fathers, including James Madison, to the Sedition Act of 1798, which would have prohibited any "false" or "scandalous" writings against government officers.

According to Thomas, though, the fact that the framers opposed criminal punishment for criticisms of public officials did not necessarily mean they opposed providing an accessible civil defamation remedy for those politicians. In fact, Thomas said, the founders consistently opposed using federal law to override state common law, which controlled defamation actions at the time.

TRUMP: OUR LIBEL LAWS ARE A 'SHAM'

"Far from increasing a public figure’s burden in a defamation action, the common law deemed libels against public figures to be, if anything, more serious and injurious than ordinary libels," Thomas wrote. "Libel of a public official was deemed an offense 'most dangerous to the people, and deserv[ing of] punishment, because the people may be deceived and reject the best citizens to their great injury, and it may be to the loss of their liberties.'"

Thomas added: "Madison seemed to contemplate that 'those who administer [the federal government]' retain “a remedy, for their injured reputations, under the same laws, and in the same tribunals, which protect their lives, their liberties, and their properties. ... In short, there appears to be little historical evidence suggesting that The New York Times actual-malice rule flows from the original understanding of the First or 14th Amendment."

In the absence of a compelling constitutional basis to override common law, Thomas said, the Supreme Court had no business getting involved in state-level defamation law in the first place.

Thomas' opinion came in an unrelated case in which the high court rejected an appeal from actress Kathrine McKee, who said comic icon Bill Cosby raped her in 1974. McKee sued Cosby for damaging her reputation after a lawyer for the comedian allegedly leaked a letter attacking McKee. Two lower courts ruled against her and dismissed the case, based largely on McKee's role as a public figure.

Laura Ingraham sits down with the Supreme Court justice in an 'Ingraham Angle' exclusive.

No other justice joined Thomas' opinion on Tuesday, and it appeared unlikely that the Supreme Court would agree to hear a challenge to the case.

But Thomas' opinion may have been an effort to signal to other groups to bring a lawsuit based on Sullivan, amid an increasingly changed media landscape in which information travels more quickly than ever, legal experts said. One of the key rationales for setting a higher bar for public officials to sue for defamation relates to their perceived ability to quickly quash misinformation on their own -- an ability that some observers say is fading in the age of blogs and around-the-clock news coverage.

Thomas is not the only prominent conservative justice to voice disdain for the Sullivan decision. The late Justice Antonin Scalia publicly railed against the court's ruling in that case, saying it was abhorrent and constitutionally baseless.

Thomas has issued striking opinions in other cases that seemingly also served as signals. In support of Trump's reinstated travel ban, Thomas wrote that nationwide injunctions issued by individual federal judges “take a toll on the federal court system — preventing legal questions from percolating through the federal courts, encouraging forum shopping, and making every case a national emergency for the courts and for the executive branch.”