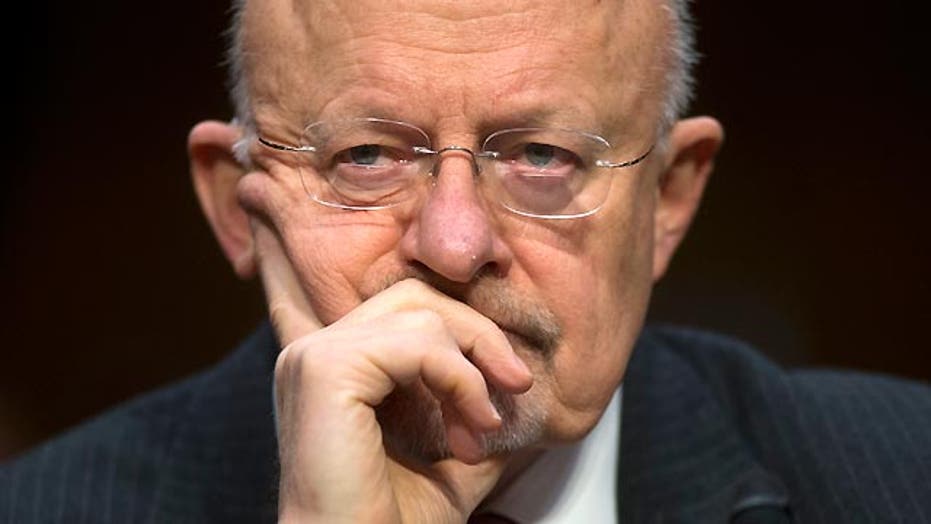 Clapper memo: A slap in the face to Obama?

Director of National Intelligence James Clapper praises analysts in memo for bringing attention to ISIS for the past two years. Plus, Netanyahu, Obama have contentious meeting

The top U.S. intelligence official, in a memo to staff obtained by Fox News, praised his analysts for their work bringing attention to the Islamic State's gains over the past two years -- as Republican lawmakers likewise jumped to their defense after President Obama claimed they "underestimated" the threat.

The president's comments to "60 Minutes" over the weekend have prompted a vigorous round of finger-pointing. The White House has eased off, saying the president did not intend to blame the intelligence community -- but also is disputing accusations from GOP lawmakers and intelligence officials that Obama simply ignored their ISIS warnings for months.

"It wasn't for lack of information, we all knew about it for years," Rep. Michele Bachmann, R-Minn., told Fox News on Wednesday. She claimed lawmakers on the House Intelligence Committee, on which she sits, "gave it to the administration and said, 'wake up, there's something very serious happening.'"

Director of National Intelligence James Clapper has been left in a difficult position, with Obama pointing at him in his "60 Minutes" interview. In the interview, Obama said Clapper "has acknowledged that I think they underestimated what had been taking place in Syria."

But in the memo to staff sent Tuesday, Clapper made clear his officers have been on the case for a while.

"I'm proud of the [intelligence community's] efforts over the past two years to monitor, assess and call attention to the expansion of ISIL, and I know the president has found that work to be critical to developing his strategy," Clapper wrote.

Clapper noted he and Obama were on the same page in saying it was difficult to predict the "will" of Iraqi security forces to fight.

"Despite all we understood about the capabilities of ISIL and the Iraqi Security Forces, we have no intelligence tool that could have predicted the ISF's sudden collapse in northern Iraq and the resultant ease with which ISIL forces captured territory," he wrote. Clapper said Obama is "fully engaged" in the mission and had expressed "gratitude" for the intelligence community.

But Clapper's claims about how their analysts have been drawing attention to the Islamic State -- also known as ISIS, or ISIL -- for the past two years could fuel concerns that the White House was not taking those assessments seriously enough.

Intelligence officials have told Fox News and other outlets that they were drawing attention for months to the ISIS threat but were ignored by the White House. On Tuesday, White House Press Secretary Josh Earnest pointed to Clapper's memo to rebut one anonymous quote to that effect in The New York Times.

"He put out a message to the intelligence community that directly contradicts the anonymous individual who's quoted in the New York Times," Earnest said, reading passages from Clapper's memo and saying the memo was "consistent" with Obama's comments on "60 Minutes."

Clapper previously had admitted that U.S. analysts both underestimated the Islamic State, or ISIS, and "overestimated" the ability of the Iraqi army to fight them.

But despite Earnest's claims, the memo on Tuesday did not acknowledge underestimating ISIS, as Obama said on "60 Minutes."