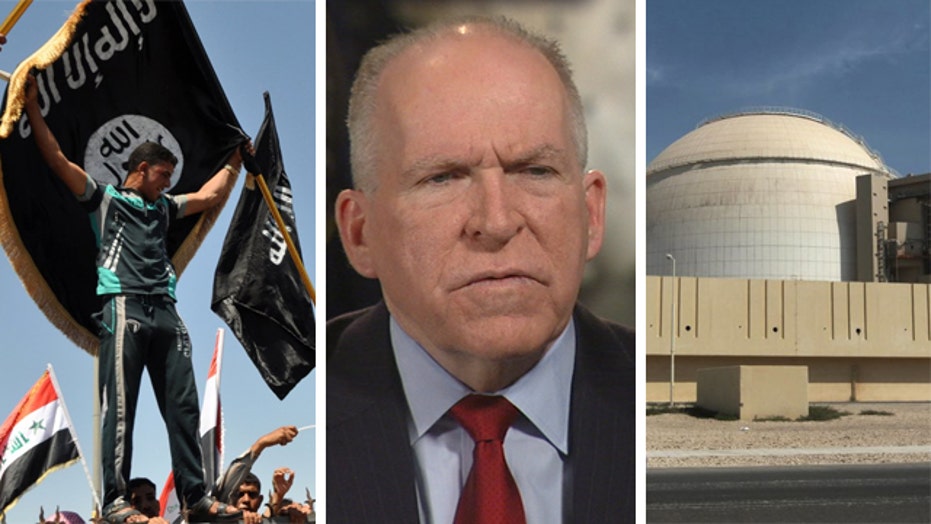 CIA Director John Brennan on threat of Iran and ISIS

WASHINGTON – CIA Director John Brennan said Sunday no matter the outcome of nuclear talks with Iran, the U.S. will “continue to keep pressure” on the country and learn from its past mistakes.

“The nuclear program is one issue that we’re hoping to be able to halt; but also, we see that Iran is still a state sponsor of terrorism,” Brennan said during an exclusive interview on “Fox News Sunday.”

“And so what we have to do, whether there's a deal or not, is continue to keep pressure on Iran and to make sure that it is not able to continue to destabilize a number of the countries in the region.”

Brennan believes Tehran realizes that there will be “tremendous costs and consequences and implications” if they don’t comply and says there are a number of things that the U.S. still has available in its arsenal to prevent Iran from getting a nuclear bomb.

“President Obama has made it very clear that we are going to prevent Iran from having that type of nuclear weapon that they -- they were going on the track to obtain,” Brennan said. “So if they decide to go down that route, they know that they will do so at their peril.”

Brennan added that the U.S. has learned from its past mistakes with Iran.

“I think we’ve gone to school on some of those developments over the last decade or so, so that we can now have a better plan and an opportunity to verify some of the things that they are saying that they’re going to do and not do,” he said.

During the wide-ranging interview, Brennan said that Iran and the Islamic State are equal in the threat they pose to the United States. He also responded to Russian President Vladimir Putin’s push into Ukraine, North Korea and cyber warfare.

The U.S. spy agency has come under fire for failing to stop the spread of ISIS during the early part of 2014. Critics say the CIA made the same mistake when it came to the spread of Iranian-backed rebels in Yemen and also got Putin’s intentions in Ukraine wrong.

“Our ability to evaluate some of these things is limited if we don’t have the presence, if we don’t have the insights and capabilities,” Brennan told host Chris Wallace during the exclusive interview held at CIA headquarters in Langley, Va. “But I think we’ve done a very good job over the course of time identifying some of these new waves that have come through. But intelligence is not a perfect science. It is one that is based on the intelligence information that we get, the insights, the assessments.”

Wallace asked Brennan if the decision to pull out U.S. troops from Iraq in December 2011 helped set the stage for the spread of ISIS.

Brennan, who called the world a “complicated place,” said the “the fault really lies with a number of the Iraqis who wasted and squandered the opportunity they had after the government was reconstituted not to put at rest some of these sectarian tensions and not to be more inclusive as far as bringing the Sunni community in.”

He added that while American forces provided help to Iraq, “it is really up to these countries’ military security and intelligence forces to step up.”

Last year, U.S. drones killed at least 139 Al Qaeda operatives. Brennan pushed back on criticism that by killing terrorists, the U.S. is losing valuable intelligence they could provide.

“I think we have said over and over that if we have the opportunity to capture terrorists, typically working with a lot of our partners overseas, we will do that,” he said. “And there have been countless terrorists who have been captured, who have been arrested and detained, who have been debriefed and are providing intelligence insights into those terrorist organizations.”

When asked if the CIA misjudged Putin’s intentions in Ukraine, Brennan said it had not and that the U.S. could “continue to put pressure on Mr. Putin so that they Ukrainian people and the Ukrainian government can have a future that is going to be peaceful and safe and secure.”

During the interview, Brennan also said that the cyber world had become the new frontline in the contest between nations. He added that the digital domain has continued to grow and evolve and is used by terrorist groups and others to communicate and push their propaganda.  As a result, the CIA and the country’s other intelligence agencies must master that domain to protect the American people, he said.

Brennan sidestepped rumors that the U.S. might have had a hand in the massive Internet outage in North Korea late last year following the Sony hacking scandal.

The CIA chief blamed much of it on North Korea’s ”rickety” infrastructure, adding there are many technical challenges that go along with running a dated system.

When Wallace asked, “Did the U.S. give a little shake to the rickety North Korean system?” Brennan replied with a chuckle, “I’m not going to address anything that we may have done in that instance and I'm not acknowledging anything at all here.”

Wallace replied, “but you’re not denying it either.”