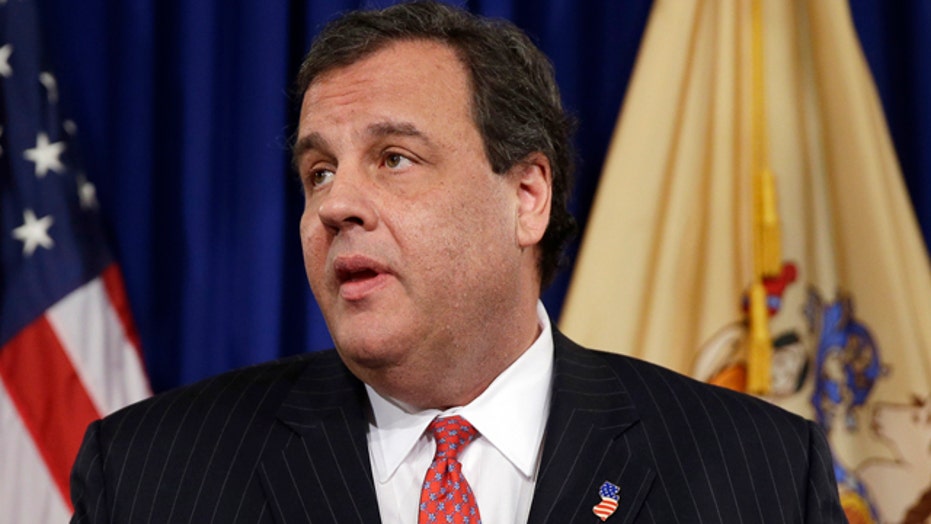 New Jersey Gov. Chris Christie publicly apologized Thursday for controversial lane closures last year that were arranged by his associates as an apparent act of political revenge, and fired a top aide who was at the center of the scandal.

"I come out here to apologize to the people of New Jersey," he said. "I am embarrassed and humiliated."

The governor added: "I am stunned by the abject stupidity that was shown here."

The governor is trying to get a handle on the scandal, which could threaten the potential 2016 presidential candidate's political aspirations. He's also facing various legal inquiries. The U.S. attorney's office in New Jersey confirmed Thursday that it is now "reviewing" the matter to "determine whether a federal law was implicated."

Christie stressed Thursday that he was not involved and that while his political style is tough, "I am not a bully." He said repeatedly that he was betrayed by his staff.

Christie maintained that, until this week, he did not know his staff was involved in the incident last September, when lanes at the George Washington Bridge from Fort Lee, N.J., were closed for four days. For months, Christie faced accusations the lanes were blocked in retaliation over Mayor Mark Sokolich's refusal to endorse him for re-election last November.

"I was blind-sided," Christie said Thursday, claiming Kelly "lied" to him when he asked senior staffers weeks ago about the lane closures.

He said he has fired Kelly, "effective immediately." He also cracked down on his former campaign manager, Bill Stepien, for his involvement in the incident.

Christie said Stepien will no longer be considered for state GOP chairman, and he will have to end a consulting contract with the Republican Governor's Association, which Christie leads.

Christie plans to travel to Fort Lee later Thursday to apologize to the mayor, and the town's residents.

Meanwhile, Christie confidant and ex-Port Authority official David Wildstein, who was deeply involved in the closures, had been set to testify Thursday at a state legislative hearing. But he told a state assembly panel he was asserting his right not to speak.

"On the advice of counsel, I assert my right to remain silent," Wildstein said in response to several questions, shortly after Christie ended his press conference on the controversy.

Wednesday's report fueled Democratic complaints that the closures were political retribution against the local mayor. The local scandal threatens to become a national headache for Christie as he weighs a possible presidential run in 2016.

Before Christie's press conference, the Democratic National Committee called on Christie to give the public more than "his customary bluster and deflection."

"It's time that the so-called 'straight talking' governor takes some of his own advice - and he can do that by cooperating with all investigations surrounding the politically-motivated lane closures and ensuring his staff and associates do the same," a DNC spokesman said.

The New York Times and Bergen County Record reported that emails show his deputy chief of staff suggested closures to the Port Authority of New York and New Jersey two weeks before the incident.

"Time for some traffic problems in Fort Lee," she wrote to Wildstein, according to the Times. At the time, Wildstein was on the Port Authority; he has since resigned.

The George Washington Bridge, which connects New Jersey and New York City, is one of the most heavily traveled commuter routes in the country, handling nearly 300,000 vehicles a day. The closures in September caused massive gridlock, leaving commuters stuck in traffic for hours.

It was the Port Authority that ordered the closures, claiming they were part of a traffic study.

"The New York side gave Fort Lee back all three lanes this morning. We are appropriately going nuts," Wildstein reportedly wrote to Kelly. "[Port Authority Chairman David] Samson helping us to retaliate."

Rep. Bill Pascrell, D-N.J., said Wednesday that his constituents "were put in jeopardy because of some jerk who made a decision."

Though Christie denies involvement, Democrats have tried to use the incident to undercut his image as a bipartisan problem-solver -- amid expectations that he may run for president in 2016.

Republican operative Hogan Gidley told The Associated Press that even if Christie navigates the current controversy well,  the issue would likely come back to haunt him during a presidential run.

"I don't necessarily think it's Christie's policy that's going to ultimately catapult or sink his campaign; I think it's his personality," said Gidley, a senior adviser to 2012 presidential candidate Rick Santorum.