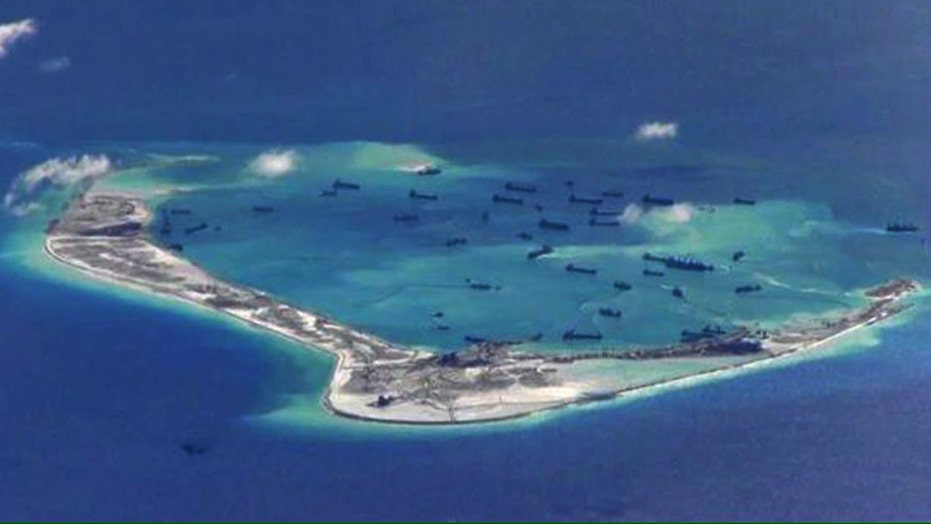 Significance of US Navy standing up to China

China said Wednesday that the U.S. Navy’s sailing of a warship close to one of its artificial islands was a “provocative” maneuver and it placed personnel and infrastructure on the island in jeopardy.

China’s Foreign Ministry said on its website that Executive Vice Minister Zhang Yesui told American ambassador Max Baucus the U.S. had acted in defiance of Chinese objections to the Navy sending a ship within its 12-nautical mile territorial zone Tuesday.

The ministry said China was “extremely dissatisfied and resolutely opposed” the U.S. action. The State Department declined to comment on any of China’s remarks on Tuesday.

The USS Lassen’s patrol is considered the most significant challenge to China’s claims around the artificial islands it has built in the Spratly archipelago. China said authorities monitored and warned the destroyer as it entered the territory around Subi Reef. China’s defense ministry also said a Chinese guided-missile destroy and navy patrol ship was shadowing the Navy vessel, according to Reuters.

However, an unnamed U.S. defense official told the Associated Press the patrol was completed without incident. Navy Cmdr. Bill Urban, a Pentagon spokesman, declined to comment on the matter.

China’s national newspaper slammed the U.S. for “provoking” China and claimed the country isn’t afraid of fighting a war against the U.S. in the South China Sea, according to The Guardian.

“In (the) face of U.S. harassment, Beijing should deal with Washington tactfully and prepare for the worst,” a Global Times editorial said. “This can convince the White House that China, despite its unwillingness, is not frightened to fight a war with the U.S. in the region, and is determined to safeguard its national interests and dignity.”

Yang Yujun, a defense ministry spokesperson, said “we will take any measures necessary to safeguard our security.”

Navy officials defended the patrol, saying it was necessary to assert the U.S. position that China’s man-made islands cannot be considered sovereign territory with the right surrounding territorial waters. International law permits military vessels the right of “innocent passage” in transiting other country’s seas without notification, although China’s Foreign Ministry labeled the ship’s actions as illegal.

The U.S. said it doesn't take a position on sovereignty over the South China Sea but insists on freedom of navigation and overflight. About 30 percent of global trade passes through the South China Sea, which also has rich fishing grounds and a potential wealth of undersea mineral deposits.

China said it respects the right of navigation but has never specified the exact legal status of its maritime claims. China says virtually all of the South China Sea belongs to it, while Brunei, Malaysia, the Philippines, Taiwan and Vietnam claim either parts or all of it.

State Department spokesman John Kirby said Tuesday the U.S. has a right to freedom of navigation in international waters, and such maneuvers "should not be construed as a threat by anybody." He said the U.S. wants to deepen relations with China.

"The U.S.-China relationship is vitally important and one that we want to see continue to improve and to grow for the benefit of both our countries, not to mention the region," Kirby told reporters in Washington.

China has sped up production of its reclamation projects since 2013. It has piled sand atop reefs and atolls and added buildings, ports and airstrips big enough to handle bombers and fighter jets – activities seen as attempting to change the territorial status by altering geography.

The White House has repeatedly said it will exercise its right to freedom of navigation in any international waters.

"Make no mistake, the United States will fly, sail and operate wherever international law allows, as we do around the world, and the South China Sea is not and will not be an exception," Defense Secretary Ash Carter said earlier this month.

"China will firmly deal with provocations from other countries," the statement said, adding that China would continue to monitor the air and sea and take further action when necessary.

"If any country wishes to disrupt or impede China's reasonable, justifiable and lawful activities on our own territories by playing some little tricks, I would advise these countries to cast off this fantasy," Lu said.

The South China Sea has become an increasingly sore point in relations with the United States, even as President Barack Obama and China's President Xi Jinping have sought to deepen cooperation in other areas.

Despite those tensions, exchanges between the two militaries have continued to expand, with a U.S. Navy delegation paying visits last week to China's sole aircraft carrier and a submarine warfare academy.