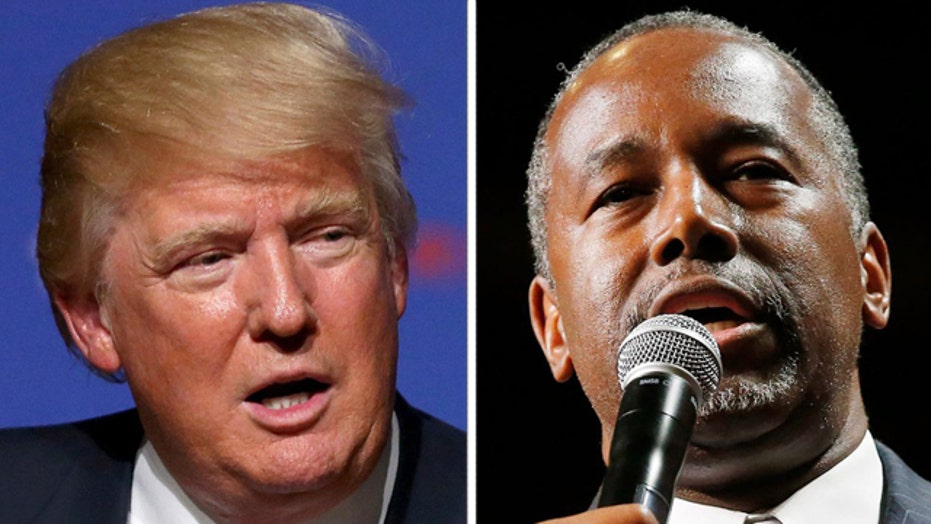 Trump, Carson and everyone else in GOP field

Donald Trump and Ben Carson are in double-digits in the polls and leaving the rest of the GOP candidates behind. How can contenders make headway? 'On the Record's' panel weighs in.

Ben Carson, the soft-spoken outsider candidate, has surged into a near-tie with Donald Trump in a new Republican presidential poll, as they head into the second 2016 primary debate.

The fresh numbers come as yet another survey shows Hillary Clinton's support eroding on the Democratic side, and rival Bernie Sanders steadily climbing.

In the Republican race, the New York Times/CBS News poll shows Carson rising to 23 percent, all the way from 6 percent in a survey taken before the kick-off Aug. 6 presidential  debate. The same survey shows Trump with 27 percent.

Carson, a retired neurosurgeon, has caught fire in the polls in recent weeks, both nationally and in the lead-off caucus state of Iowa.

At a rally in Dallas Monday night, Trump mentioned the coverage that candidates like Carson and former HP exec Carly Fiorina are getting, but said, "nobody is going to be able to do the job that I am going to do."

While Trump and Carson have not clashed intensely on the campaign trail to this point, they did get in a dust-up last week over comments about faith.

Carson initially said he didn't get the impression that humility and "fear of the Lord" were important to Trump. Trump fired back, calling Carson just an "okay doctor."

On Fox News on Friday, Carson then apologized, saying: "There is no reason ever to question anybody's faith. That's something between them and God."

Eleven candidates -- including Trump, Carson and Fiorina -- are set to square off at the main-stage CNN debate Wednesday night in Los Angeles.

The poll was conducted Sept. 9-13 and had a margin of error of 6 percentage points.

Vermont Sen. Sanders, in that time, has risen from 10 to 24 percent. Vice President Biden, who is considering a bid but has not announced a decision, is also at 21 percent in the poll.