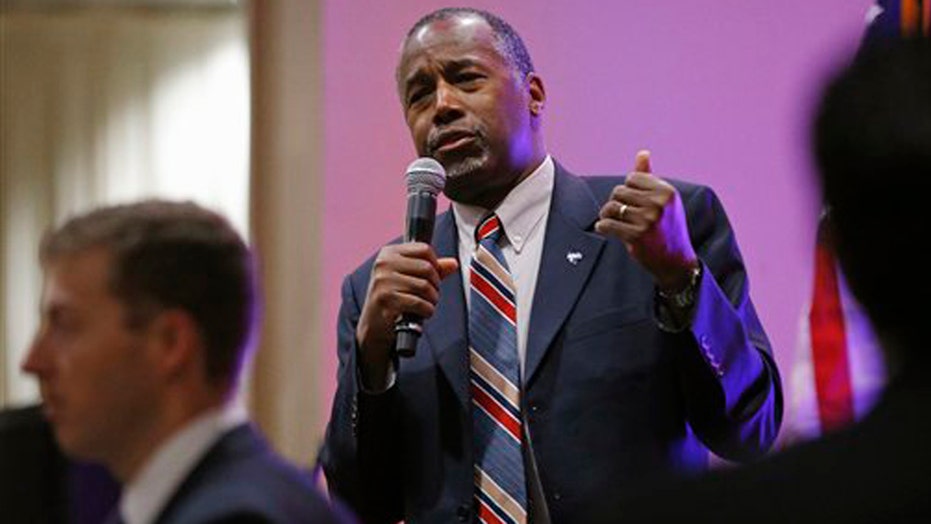 How risky is Ben Carson's plan to travel to Jordan?

Republican presidential candidate Ben Carson finished touring Syrian refugee camps in Jordan Saturday and suggested that camps should serve as a long-term solution for millions, while other refugees could be absorbed by Middle Eastern countries.

“I did not detect any great desire for them to come to the United States," Carson told The Associated Press in a phone interview from Jordan. "You've got these refugee camps that aren't completely full. And all you need is the resources to be able to run them. Why do you need to create something else?"

Carson toured the Azraq camp in northern Jordan under heavy Jordanian security. The tour was closed off to journalists. Carson’s campaign also limited access, not providing his itinerary.

Upon finishing his tour, Carson reiterated his opposition to allowing any Syrian refugees to come to the U.S., saying he didn’t learn anything that gives him confidence in authorities’ ability to screen potential terrorists.

"What I learned is that you're going to get a different answer from everybody depending on what their slant is," he said. "I always oppose doing unnecessary things, particularly dangerous and costly unnecessary things.”

Carson also urged Americans to launch a “humanitarian drive” to raise billions of dollars that officials say is needed to improve the conditions for refugees settled across several countries in the Middle East. Carson told the Associated Press said all the refugees needed is “adequate funding.”

“They were quite willing to stay there as long as it takes before they can get back home."

Carson has often taken a harsh tone when discussing the refugee crisis, including how the U.S. handle resettling the refugees on American soil, amid concerns about terrorists foiling the vetting process.

He also suggested Saturday that it would be best to absorb Syrian refugees in Middle Eastern host countries, which have given temporary shelter to most of the more than 4 million Syrians who have fled civil war in their country since 2011.

In a separate statement, he described Syrians as "as very hard working, determined people, which should only enhance the overall economic health of the neighboring Arab countries that accept and integrate them into the general population."

And he broadened his call for financial support beyond Americans: "The humanitarian crisis presented by the fleeing Syrian refugees can be addressed if the nations of the world with resources would provide financial and material support to the aforementioned countries as well as encouragement."

More than 4 million Syrians fled their homeland since 2011, after a popular uprising erupted against President Bashar Assad and quickly turned into a devastating civil war. Most initially settled in neighboring countries, but conditions there have become increasingly difficult.

Carson and his GOP rivals have criticized the administration’s plan to welcome 10,000 Syrian refugees this budget year.

The retired neurosurgeon has repeatedly struggled to discuss international affairs as they become a greater focus in the 2016 presidential contest.

Those close to him concede his foreign policy fluency isn't yet where it needs to be. And they hope missions like this will help change that.

"I'd say he's 75 percent of the way there," Armstrong Williams, Carson's longtime business manager and closest confidant, said last week of the candidate's grasp of foreign policy. "The world is a complex place, and he wants to get it right."