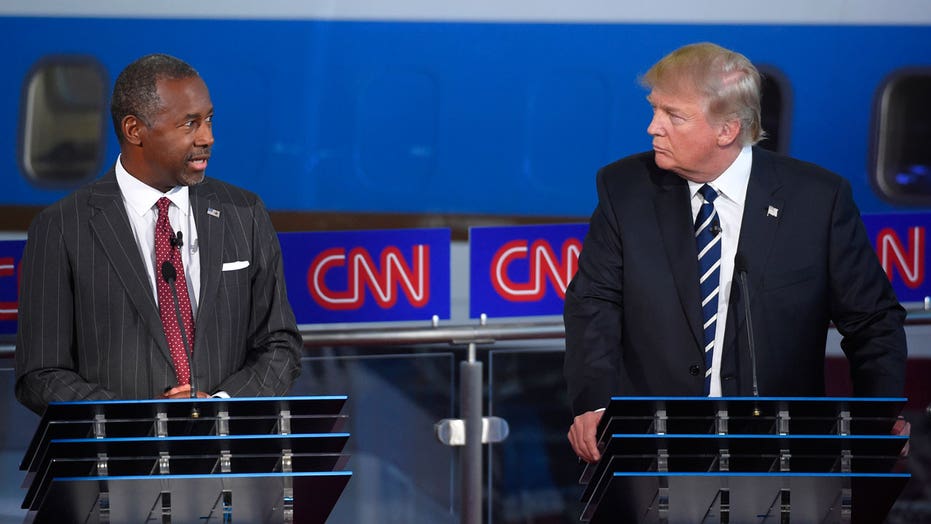 Republican presidential candidate Ben Carson suggested Sunday that a Muslim should not be president, extending the new and unexpected religion debate on the 2016 campaign trail.

“I would not advocate that we put a Muslim in charge of this nation,” Carson, a Christian and retired neurosurgeon, said on NBC’s “Meet the Press.” “I absolutely would not agree with that.”

Carson, a top-tier 2016 candidate and popular among the GOP’s evangelical wing, made the statement after fellow Republican candidate Donald Trump was addressed by a man during a rally Thursday in New Hampshire who said President Obama is a Muslim.

“We have a problem in this country,” the unidentified man said. “It's called Muslim. … You know our current president is one."

Obama says he is a Christian. But Trump has declined to address the issue, saying he is not “morally obligated” to set straight the record.

Carson also described the Islamic faith as inconsistent with the Constitution. However, he did not specify in what way Islam ran counter to constitutional principles.

Carson said he believes Obama is a Christian and has “no reason to doubt what he says.”

He also said he would consider voting for a Muslim running for Congress, depending on “who that Muslim is and what their policies are.”

Carson also made a distinction when it came to electing Muslims to Congress, calling it a "different story" from the presidency that "depends on who that Muslim is and what their policies are, just as it depends on what anybody else says."

"If there's somebody who's of any faith, but they say things, and their life has been consistent with things that will elevate this nation and make it possible for everybody to succeed, and bring peace and harmony, then I'm with them," Carson said.

Trump on Sunday told ABC’s “This Week” that he doesn’t talk about other people’s faith and that Obama is “very capable of defending himself.”

He also said the politically correct statement is that Muslims are not a problem in the United States but the reality is that “some” associated with terrorism pose a worldwide threat.

“We can say … everything's wonderful,” Trump said. “But certainly it is a problem. … if I want to say no, not at all, people would laugh at me.”

Fellow GOP contender and Florida Sen. Marco Rubio told ABC about the Muslim debate: “This has nothing to do with the future of our country. These issues have been discussed ad nauseam over the last few years. It's a big waste of time. Barack Obama will not be president in a year and a half. It's time to start talking about the future of America and the people that are at home.”

"To me this really means he is not qualified to be president of the United States," said the group's spokesman, Ibrahim Hooper. "You cannot hold these kinds of views and at the same time say you will represent all Americans, of all faiths and backgrounds."

Hooper said the Constitution expressly forbids religious tests for those seeking public office and called for the repudiation of "these un-American comments."

In a separate appearance on NBC, fellow 2016 GOP candidate Ohio Gov. John Kasich, was asked whether he would have a problem with a Muslim in the White House.

"The answer is, at the end of the day, you've got to go through the rigors, and people will look at everything. But, for me, the most important thing about being president is you have leadership skills, you know what you're doing and you can help fix this country and raise this country. Those are the qualifications that matter to me."

Texas Sen. Ted Cruz, who taped Sunday an episode of Iowa Press, an Iowa Public Television program, was asked if he agreed with Carson's statements on Muslims being president. "The Constitution specifies that there shall be no religious test for public office, and I am a constitutionalist," Cruz said.

“But unsurprisingly, this left Republicans scratching their heads. Of course a Muslim, or any other American citizen, can run for president, end of story."