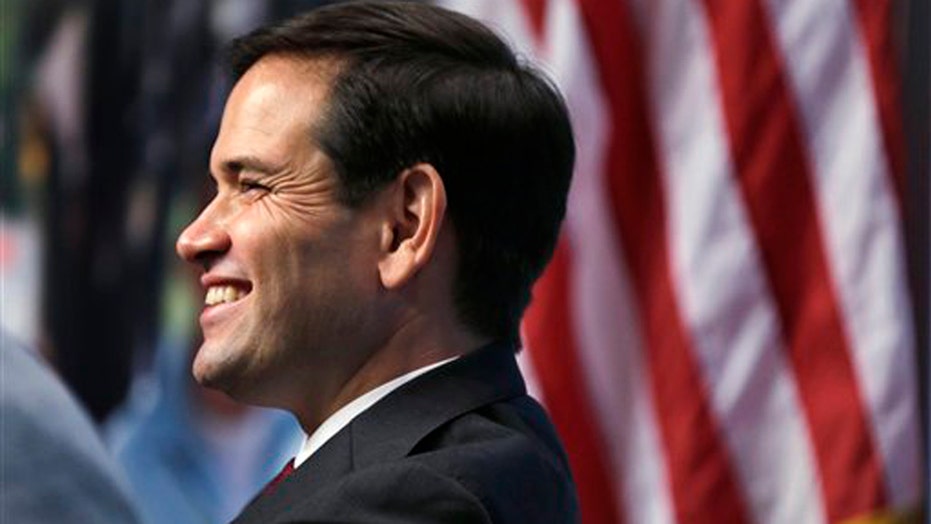 Can Rubio use financial issues to his advantage?

Critics may think Sen. Marco Rubio, R-Fla., has some explaining to do over an old Republican Party-issued charge card with a load of his personal expenses on it, but whether this rises to the level of “scandal,” is still up for debate.

It’s more like a tempest in a teapot, argue campaign strategists who spoke with FoxNews.com on Friday.

“If this is all (the other campaigns) are coming at him with, then he is going to be in good shape,” offered Republican media analyst Pete Snyder.

This week, Donald Trump raised the question of Rubio’s finances in a scrum with the press, calling out his old “credit card” with the Florida GOP specifically.

Trump is referring to claims that Rubio charged thousands of dollars worth of personal expenses on his Republican Party-issued American Express card during the time he was a GOP leader in the Florida House of Representatives from 2005 to 2009. The party released detailed records of his expenses from 2007 to 2009 years ago, but there remains a gap in what he expenses he might have put on the party’s tab in 2005 and 2006. His campaign has promised to release those records in the coming weeks, according to The Washington Post.

For his part, Rubio has told the press that the party “never paid a single personal expense of mine,” noting that since it was an American Express card, he was required to pay the balance of his personal charges back each month.

“If there was a personal expense, I paid it. If it was a Party expense, the Party paid it. Now I recognize in hindsight I would do it different to avoid confusion. But the Republican Party never paid a single personal expense of mine,” he told Good Morning America Nov. 4.

Those charges, according to the Tampa Bay Times, which reviewed the available records in 2010, ranged from meals and beverages to “supplies” at the local Apple store and a lumber company. Rubio was questioned in 2010 about the $1,000 charge to fix his family’s minivan -- he said it had been damaged at a political event. He was also asked about charging travel expenses for a family reunion on the card -- he explained he paid with the American Express by accident.

The Florida Ethics Commission, looking into his expenses in 2012, found no cause to charge him with a violation, but one inspector had strong words. "The level of negligence exhibited by Respondent's confusion between the (Republican Party of Florida) American Express card and his personal MasterCard, together with his failure to recognize the error when reviewing the months' statements, and his signature on the reimbursement requests, is disturbing," the commission’s prosecutor wrote.

It is not entirely clear whether Rubio’s spending ways were sanctioned by the party or not. As the Washington Post’s Fact Checker points out, the Florida GOP has made conflicting statements over the years. On one hand, party spokesman Katy Gordon told the Tampa Bay paper in 2010 that, "the RPOF American Express card is a corporate card and is meant to be used for business expenses" and not personal expenses, but a month later, she seemed to dial back, saying that personal expenses were expected to be “paid through a reimbursement, or in some cases directly to American Express."

Which is exactly what Rubio did, he claimed this week, lashing out at Trump in the process. “I find ironic,” he said to Fox Friday morning,  “Donald Trump had four bankruptcies in his businesses … who is he to talk to anyone about finances?”

Former Republican Rep. Joe Scarborough, who also served in the Florida state house, said Friday that there were no “clear lines” in the way Republican leaders were spending taxpayer money and the party’s money in Florida in those days. Lawmakers were investigated, and at least one of his friends went to jail. However, he doesn’t think the Rubio story has legs in 2015.

“I’ve been hearing since 2010 that the other shoe was going to fall,” Scarborough said in regards to Rubio’s charge card. “If the other shoe is even going to fall, I have to say this is the longest five-year step I’ve ever seen in my life. There is a lot of smoke but you never really find the fire.”

“It will hurt him if he allows it to hurt him,” Shirley told FoxNews.com. “Questions about your finances are inevitable. So if he allows it to define him that is a problem. If he changes the subject and mounts a counter offensive, it won’t become an issue.”

GOP strategist Mark Corallo says short of Rubio spending the party’s money on luxuries, or worse, not repaying it, he doesn’t think the voters will care much. If anything, they may empathize with Rubio as another American debt holder.

“This is just typical political opposition research stuff,” said Corallo. “And it’s being dumped early enough that it won’t have much chance of hurting his chances of winning the nomination.”