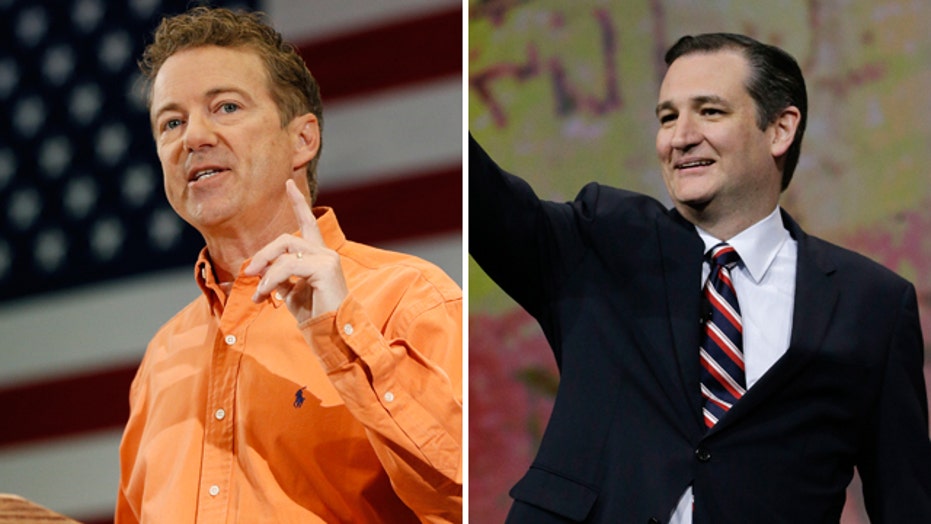 The battle for the liberty vote in New Hampshire

The battle for the 2016 Republican nomination is on in New Hampshire, where presidential contenders Ted Cruz and Rand Paul have targeted the libertarian vote in hopes of winning the country’s first primary.

Marco Rubio, the third GOP candidate to announce thus far, has yet to visit the state as an official presidential contender.

In New Hampshire, libertarian voters represent 10 to 15 percent of the vote in a Republican primary – a percentage that could make or break a candidate’s shot at the nomination.

Andy Smith, director of the University of New Hampshire Survey Center, explained, “In a multi-candidate field like 2016 is shaping up to be, it may be possible that you can win the primary with 20 percent of the votership.”

Smith said it was a smart move for candidates to cater to the libertarian demographic in the primary, but added it wouldn’t win them the general election.

Cruz and Paul stopped by the Granite State shortly after announcing their bids for the White House, rallying supporters by evoking rhetoric meant to woo “liberty lovers.”

Paul joked in his remarks to the town hall in Milford, N.H., “When the founders of New Hampshire came up with the phrase ‘Live free or die’ they didn’t leave a lot of wiggle room.” The candidate has set the bar high for himself in New Hampshire, stating that he has to win the state to have a shot at the nomination.

Cruz riled up a New Hampshire crowd of voters and vets applauding them for their liberty-centered principles. “Give me liberty or give me death – somehow folks here understand that really well” he said during an appearance at the VFW hall in Merrimack, N.H.

Cruz has been enthusiastically embraced by some New Hampshire voters who welcome his frank talk against the "Washington elites" and his calling for Republicans to move away from the "mushy middle".

The liberty vote refers to those along a wide spectrum of libertarian-oriented voters, meaning it includes libertarians, but other Republicans as well.

While Cruz and Paul were quick to use the liberty message in New Hampshire, it may not be for every candidate.

“There are certain candidates that if they start espousing the liberty message, I don’t think people in New Hampshire will buy it,” said Joe Sweeney, a state representative and member of the New Hampshire Young Republicans.

The liberty rhetoric might win over some libertarian-minded voters but others are wary it’s all just talk.

Aaron Day, a libertarian activist and chairman of Stark360 PAC, said he has doubts. “I am worried that these candidates are kind of taking on being the ‘Obama’ of the right or the liberty movement,” he said, adding, that every candidate – liberty loving or not – was going to have to work hard in the state.

Mike Vine, editor of the Freecoast, a local online publication serving the New Hampshire seacoast, said there isn’t a huge grassroots movement behind anyone yet. “I think Rand is now going after a Ted Cruz-type supporter,” he added. “In fact in discussion threads, I see some people when they get upset with Rand - who are Rand supporters - will say ‘well I’m going to vote for Ted Cruz now.’”

The two candidates have their share of challenges to overcome just weeks into the primary season. “You have a group of people who are strong critical thinkers…politicians don’t play to libertarians as much because it is just a harder demographic," said Vine.

Vine, who campaigned for Ron Paul in 2012, is critical of the way Rand Paul’s positions have evolved. “The same incentives that are making him make the compromises on the campaign trail are going to make him compromise as president. Those pressures don’t go away,” he said.

The liberty rhetoric is appealing to a larger crowd this cycle – as young voters appear to find Cruz and Rand more relatable. “I think we have a track record in New Hampshire of being more liberty-minded Republicans. We really don’t like the government interfering with our lives,” Sweeney said.

Smith also said it was important to realize the first primary is months away and traditionally, most New Hampshire voters wait until just days before to decide on their candidate.