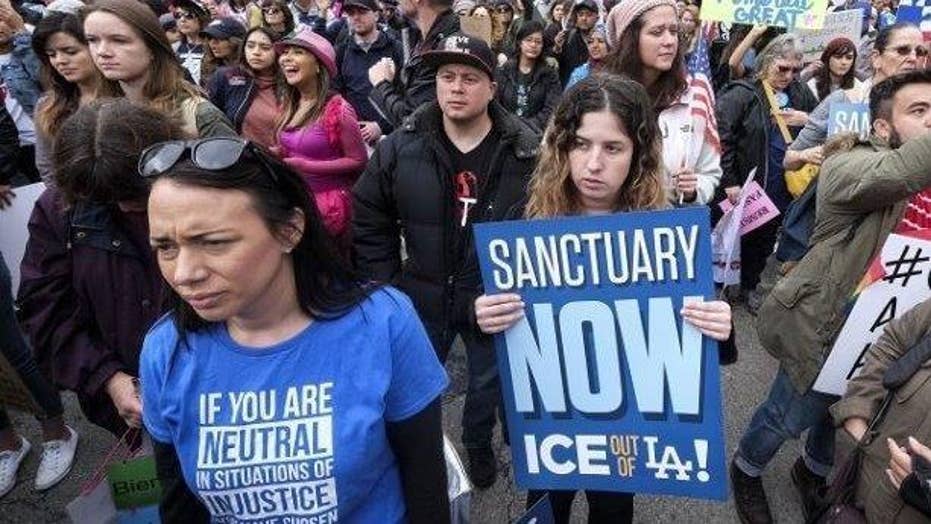 Democratic lawmakers in Sacramento want California to become the nation's first sanctuary state. Republicans tried to stop it Tuesday with legislation of their own.

"California's Democrat politicians have been promoting a policy of sheltering criminals in our state who are in here illegally," said California Assemblyman Travis Allen, R-Huntington Beach.  "Californians don't want criminals who are here illegally to be sheltered in their communities."

Allen's bill did three things. First, it stopped state funds from going to any jurisdiction that claims to be a sanctuary or has sanctuary policies in place. Secondly, it mandated state law enforcement to cooperate directly with federal immigration officials. Third, it prohibited the use of tax money to defend criminal aliens.

Allen unveiled the bill alongside Agnes Gibboney, whose son Ronald da Silva was fatally shot by a previously deported illegal immigrant in 2002.

"I don't want another family member to live the hell, with pain and suffering that I live with every day," Gibboney said.  "There was no second chance for my son.  Where is his sanctuary city?   Where was his protection?"

Allen's bill countered SB 54, which probits local law enforcement from communicating with U.S. Immigration and Customs Enforcement officials in almost all cases. The only exception involved  is convicted violent felons. Allen believes that's troublesome because that means everyone else -- including those deported in the past, those convicted of prior or multiple misdemeanors, and those who plead guilty to lesser offenses -- would be protected.

"We're not talking about someone's grandmother sitting at home," Allen said.  "Child abusers, drug abusers, stalkers, people guilty of sexual battery. These are serious, serious criminals and we shouldn't we be using state funds to protect those criminals in our communities."

Just hours after being introduced Tuesday in Sacramento, the Assembly Committee on Public Safety squashed an Allen's bill. He and others expected it. Republicans have almost zero power in the State Legislature.

Allen said he introduced the bill to influence public opinion and urge the Trump Administration to clarify who among the nation's 11 million undocumented immigrants should be deported.

Hawaii has now introduced a nearly identical sanctuary bill that protects criminal aliens, save the most violent convicted felons.