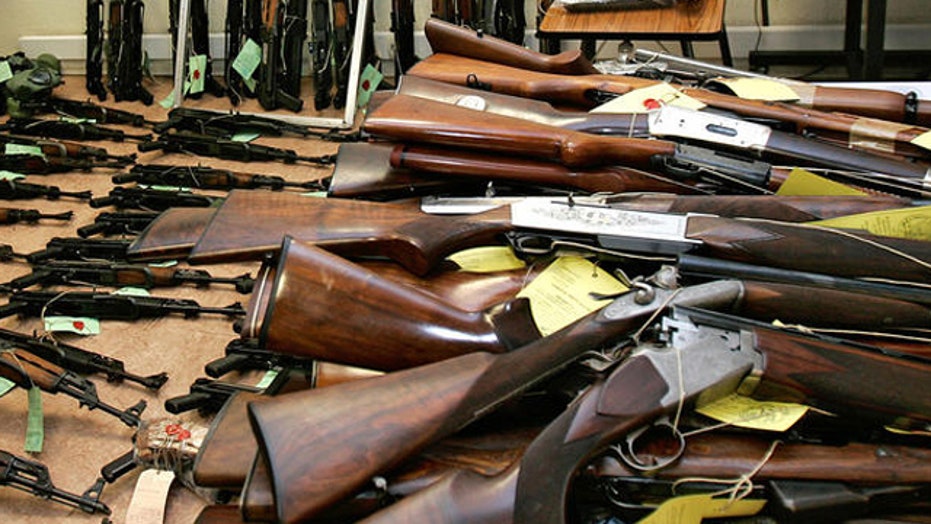 What should be done to control gun violence?

Amid a national debate about preventing the mentally ill from owning firearms, one state has a potentially potent weapon -- in California, officials are allowed to confiscate guns from convicted felons and those with a history of mental illness.

Just one problem. Staff shortages and funding cuts in recent years have left a backlog of nearly 20,000 people to disarm, says Stephen Lindley, chief of the Bureau of Firearms for the state Department of Justice.

According to the state DOJ, that's nearly 40,000 handguns and assault weapons currently in circulation that shouldn't be.

As Capitol Hill begins to debate a raft of anti-gun violence measures -- ranging from gun control bills to proposals to improve screening and the mental health system -- California officials are trying to take matters into their own hands.

After Lindley testified at a hearing last week that his office lacks enough staff to confiscate weapons from felons and the mentally ill -- which are recorded in the state's Armed Prohibited Persons database -- lawmakers are fast-tracking a bill that would free up funds for that job.

Democratic Sen. Mark Leno is sponsoring a bill that would allow the state to dip into funds collected when gun buyers pay for background checks - about $19 a person. Using that money to hire more agents, he said, would allow the state to start to chip away at the nearly 40,000 weapons on the street and in homes that, according to the law, shouldn't be.

"We have only been able to confiscate a small number of these illegally possessed weapons due to lack of resources," Leno told FoxNews.com.

"Our reinvestment in this statewide identification program will help eliminate a troubling backlog and growing mountain of illegal weapons, which threatens public safety in our communities and prevents us from enforcing existing firearms laws."

Lindley told lawmakers last week that it would cost about $25 million for 50 law enforcement investigators.

There happens to be a $20 million surplus in the account that could be tapped into under Leno's proposal. The extra money could eliminate the backlog in less than three years, Leno said.

"If there is common agreement on anything, it's that we ought to get guns out of the hands of people who are prohibited," Senate President Darrell Steinberg said in a statement.

There are about 19,700 names on California's APP list. The gun owners typically bought the firearms legally, before being convicted of a felony or being diagnosed with a mental illness. Once convicted of a crime, their names are put on the state's database, which tracks people who bought handguns or assault weapons legally but fell into a prohibited category.

California has been pro-active in getting gun control legislation on the books. Nearly a dozen bills have been proposed this year, and members of both parties say more will be put forward before next month's deadline for introducing legislation. The proposals range from requiring ammunition buyers to show identification or undergo a background check to creating ways local law enforcement can check large purchases.

Gun rights advocates say that the state's gun regulations go beyond federal measures proposed by the Obama administration and argue that California does not need to consider further measures.

The National Rifle Association, though, has said one of their goals is to get governments to enforce and prosecute laws already on the books.

California Attorney General Kamala Harris, who runs the state Department of Justice, says her office will push forward with ways to prosecute those who violate gun laws. Harris has invited all 58 district attorneys in the state to attend a Feb. 12 meeting in Los Angeles.