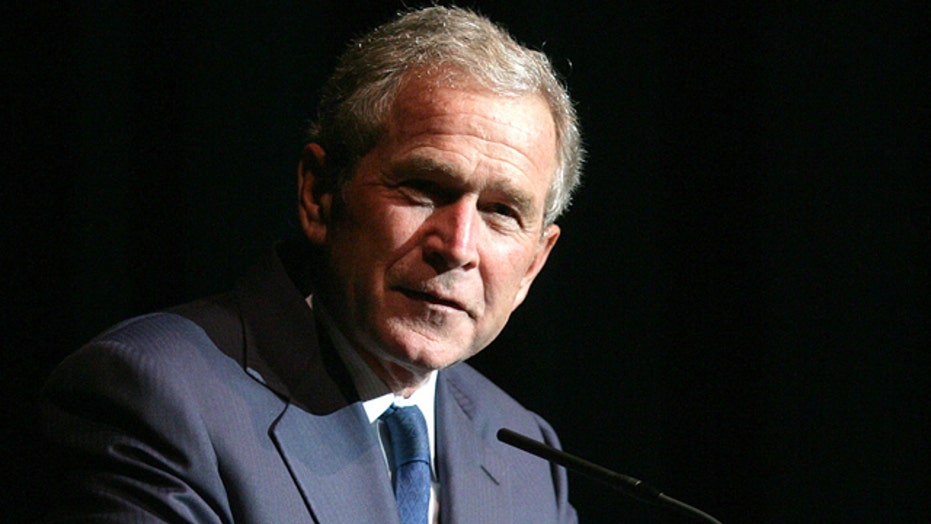 Former President George W. Bush weighed in on his successor's foreign policy challenges in a closed-door meeting over the meeting, voicing concerns about Iran's trustworthiness as Washington and Tehran resume nuclear talks.

Secretary of State John Kerry was meeting Monday with his Iranian counterpart Mohammad Javad Zarif in New York. The U.S. and five world powers are trying to finalize a nuclear deal with Iran by the end of June.

But Bush, who rarely comments on the Obama administration's efforts in public, offered a word of caution about the negotiators on the other side of the table, during a closed-door meeting of the Republican Jewish Coalition on Saturday in Las Vegas.

According to a report in Bloomberg View, Bush warned that new Iranian President Hassan Rouhani appears "smooth," but said: "You've got to ask yourself, is there a new policy or did they just change the spokesman?"

Just how tough Bush was on the sitting commander-in-chief, though, is a matter of dispute.

But another attendee, Eric Golub, told FoxNews.com this characterization was "totally wrong."

"[Bush] went out of his way not to criticize President Obama," Golub said.

The meeting was off-the-record, but Golub -- a conservative comedian who describes himself as a "passionate Jewish Republican" -- said he's speaking out to correct the record.

Golub confirmed Bush's comments on Rouhani, but said the ex-president was criticizing Iran, not Obama, in sounding a cautious tone about the course of talks.

At the heart of the pending Iran deal is a commitment by Iran to roll back its nuclear program in exchange for sanctions relief. While Obama says those sanctions could snap back if needed, Bush apparently cast doubt on that claim.

"You think the Middle East is chaotic now? Imagine what it looks like for our grandchildren. That's how Americans should view the deal," he said, according to Bloomberg.

Bloomberg also reported that Bush accused Obama of putting the U.S. in "retreat" while criticizing Obama's efforts to check the rise of the Islamic State.

Golub said Bush wasn't quite so harsh. He said Bush specifically said he did not want to project an image of the U.S. in retreat.

The toughest Bush appeared to get was quoting Sen. Lindsey Graham as saying the 2011 troop pullout from Iraq was a "strategic blunder."

Golub said Bush described ISIS as Al Qaeda's "second act" and was delivering the basic message that they're "evil killers" -- and the way to deal with them is to kill them.

The New York Times described Bush's comments on Saturday as a "tacit critique" of his successor. Golub described the Times' account as more accurate than the one in Bloomberg.

To date, Bush indeed has largely avoided commenting on the current administration -- though former Vice President Dick Cheney has been outspoken in his condemnation of Obama's national security policies.

The Iran talks, though, have generated a heated international debate. Israeli Prime Minister Benjamin Netanyahu, addressing Congress at House Speaker John Boehner's invitation, blasted the preliminary nuclear deal before it was even announced.

Critics like Netanyahu say it does not close Iran's path to a nuclear weapon, and merely delays that possibility while giving Iran access to funding by lifting sanctions.

Proponents, though, say the framework deal is better than the alternative options -- including military conflict -- and would allow international inspectors to ensure Iran is living up to its end of any agreement.