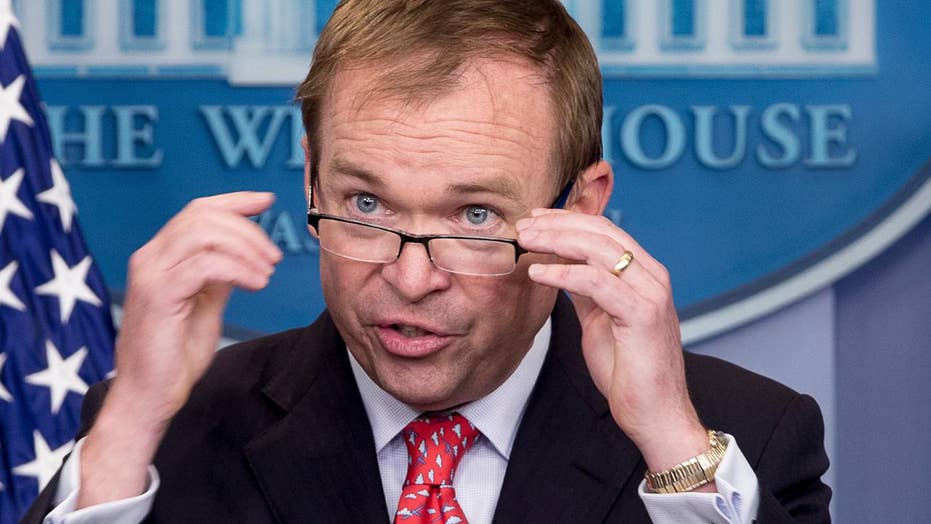 The Trump administration launched a full-court press Tuesday to defend the controversial $1 trillion-plus budget deal, after Democrats claimed victory in negotiations and conservatives claimed GOP leaders gave too much ground.

Critics complained that the deal announced Monday to avert a government shutdown would keep funding for Planned Parenthood and so-called “sanctuary cities” without funding President Trump’s promised border wall. As Trump himself defended the package, the administration dispatched top officials to make their case.

In a lively presentation during the White House briefing Tuesday afternoon -- and armed with visual aids -- White House budget chief Mick Mulvaney said this was no victory for Democrats.

He said Second Amendment and pro-life protections were still in the bill, while other Democratic pet projects were not. He accused Democrats of “spiking the football” and said  the president cut “a tremendous deal for the American people.”

He pointed in particular to the abolition of the Obama-era “parity rule” – whereby increases in defense spending had to be matched dollar-for-dollar with a rise in domestic spending. He said there is no ObamaCare bailout money, no money for Puerto Rico’s Medicaid, and no renewable energy subsidies.

Mulvaney also came armed with pictures of a 20-foot-high steel wall, saying there are “several hundreds of millions of dollars” to install such a barrier on the border. He didn’t offer specifics but said, “We are building this.”

“That’s what we got in this deal and that’s what the Democrats don’t want you to know,” he told reporters.

Congress has until Friday at midnight to pass the new budget package. Ahead of the expected votes, Democrats hailed what they cast as a victory over the Trump administration, pointing to a $5 billion increase in domestic spending, including a $2 billion increase for the National Institutes of Health.

Although Republicans managed to secure a $1.5 billion portion for border enforcement and a $21 billion hike in defense spending, both were less than what Trump had hoped for, and Democrats noted the border money wouldn’t allow for a deportation force or Trump’s signature campaign promise of a wall.

Conservative groups such as Heritage Action, as well as conservative personalities, came out hard against the deal, saying Republicans had caved to Democratic priorities.

Mulvaney’s vigorous defense of the deal was the latest step in a pushback that started early Tuesday when Trump himself tweeted that the plan was negotiated as such because “we need 60 votes in the Senate which are not there!” He added a warning shot: "Our country needs a good 'shutdown' in September to fix mess!"

The reason for the plan negotiated between the Republicans and Democrats is that we need 60 votes in the Senate which are not there! We....

either elect more Republican Senators in 2018 or change the rules now to 51%. Our country needs a good "shutdown" in September to fix mess!

Later at a White House ceremony to award a trophy to the Air Force football team, Trump again hailed parts of the deal, saying it secured the "single largest increase in border security funding in 10 years" and noted the increase in defense spending.

"You're going to have the money we need and the equipment we need," he said. "Our military is going to be taken care of, that I promise you."

Defense Secretary James Mattis said in a statement that he was "pleased" at the $21 billion defense spending increase, calling it "an important step toward rebuilding military readiness at a time when we are confronting serious security challenges throughout the globe."

"Everything from new missiles and ammunition, to facility upgrades, to new aircraft are being funded by this bill," Mattis added. "This budget agreement reaffirms the president's commitment to responsibly fund defense."

Vice President Pence appeared on Rush Limbaugh’s radio show to defend the deal, a day after the conservative talk show host blasted the deal as a “sellout, disaster, betrayal.” Limbaugh didn’t hold back, asking Pence: "If this is what happens, Mr. Vice President, why vote Republican?"

“In this new president you had someone who was able to bring people together and make a $21 billion increase in defense spending at a time of great challenge,” Pence responded.

When Limbaugh said refugee resettlement, EPA and Planned Parenthood are all funded while the wall is not, Pence disagreed and said that the border spending was only the first step on a policy he says is already decreasing illegal migration.

“This is a short- term bill….but I think it demonstrates that in President Trump’s leadership the American people have  a president who can bring together both parties,” he said.

“We got ‘em this time,” laughed Pence.

At a House GOP leadership press conference Tuesday morning, Speaker Paul Ryan and other top Republicans also defended the package. Ryan touted the “down payment on border security” and dismissed what he called Democrats’ “PR machine” playing up their end of the bargain.

“Don’t look at the press releases, look at the bill,” Ryan said, adding there are “a lot of conservative wins here.”

But despite the assurances from leadership, members of the House Freedom Caucus predicted conservative opposition in Congress.

"Money goes to Planned Parenthood, as you said. Money continues to go to sanctuary cities, but no money for the border wall," Rep. Jim Jordan, R-Ohio, said in an interview with CNN.

"I think you're going to see a lot of conservatives against this plan this week."

The bill is expected to go to the House floor Wednesday, and to the Senate Thursday, ahead of the shutdown deadline on Friday.