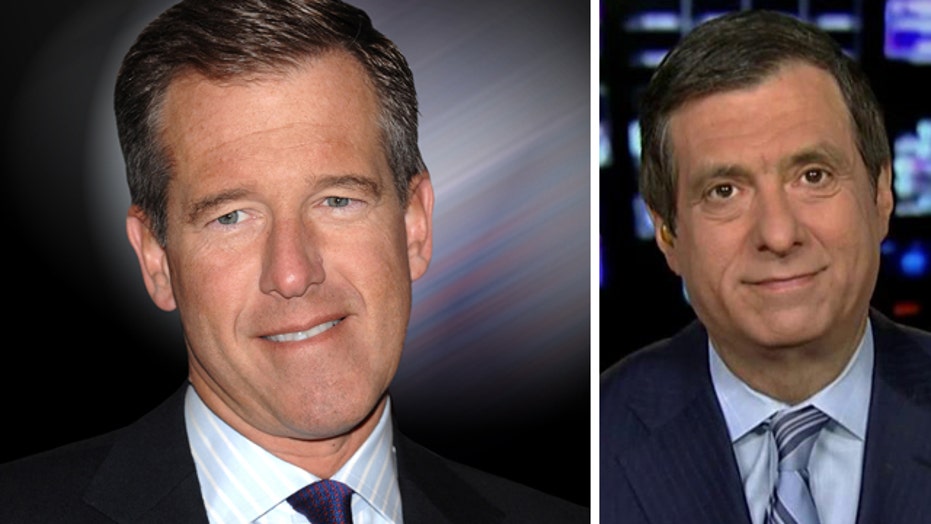 Howard Kurtz: Is Brian Williams too big to fail?

Brian Williams’ apology for his false Iraq story has spawned a new round of criticism, showing just how deep a hole he has dug for himself.

The first rule when you make a mistake, especially one of this magnitude, is to stop the bleeding by getting the facts out. But Williams seems to have done the opposite, prompting more criticism. And NBC’s no-comment stance just reinforces the notion that the network wants the controversy to magically disappear.

It’s a surreal situation, to be sure. The nation’s top-rated network anchor is facing a major credibility crisis for claiming that his Army helicopter in Iraq was hit by a rocket-propelled grenade, when in fact it was not.

The only comparable situation in modern television history is Dan Rather, who was forced to give up the CBS anchor chair after the network retracted his 2004 “Memogate” story charging President Bush with having been AWOL from the National Guard. Rather, who has always denied that he relied on forged documents—but did have a key source retract his account—wound up suing CBS over the debacle.

But Rather (who expressed support for Williams yesterday) overreached in trying to report a sensational story. Williams accurately reported his first-person story—saying in 2003 that another chopper had been hit—but over the years repeatedly told the false version.

Media critics quickly pounced. Lauren Ashburn, who appeared with me on last night’s “O’Reilly Factor,” wrote in The Hill: “If NBC News has any shred of decency, Williams's career at NBC News is toast. He broke the cardinal rule of journalism: he lied.”

And Baltimore Sun media critic David Zurawik declared: “If credibility means anything to NBC News, Brian Williams will no longer be managing editor and anchor of the evening newscast by the end of the day Friday.”

That won’t happen, of course. When it comes to the NBC franchise, Brian Williams is too big to fail. He’s the face of the network, he hosts the top-rated network newscast, he guest-hosts “Saturday Night Live.” He’s a bankable asset. And in fairness, Williams has a pretty unblemished track record.

I wouldn’t presume to tell Comcast/NBC what to do. But if an NBC correspondent had told such a false story on air, he or she would be lucky to get off with a reprimand.

I’ve interviewed Williams about the risks of reporting in Iraq (he went again as anchor in 2007). He doesn’t view himself as a cowboy. Which makes it all the more difficult to fathom why he kept embellishing a story that portrayed him as a hero—and which could be easily contradicted.

In his “Nightly News” apology, Williams said he was “instead on a following aircraft,” and he wrote on Facebook that “I was indeed on the Chinook behind the bird that took the RPG.”

But Stars & Stripes, which broke the story, contradicts this account in a second piece.

David Luke, a flight engineer in the 159th Aviation Regiment out of Savannah, said it was “misleading” for Williams to say he was in the following chopper. He said his formation of three Chinooks, which included Williams, happened to pass another helicopter company heading in the opposite direction. It was the second group of choppers that was attacked.

Sgt. 1st Class Joseph Miller, a flight engineer, said the NBC crew placed a mike in one of the helicopter’s headsets and later broadcast clips of radio reports from the Chinook company that was attacked. That, according to them, is as close as Williams got to the action.

At the same time, Rich Krell, the pilot of Williams’ copters, told CNN that while the anchor said some things that are untrue, the aircraft was hit by small-arms file. According to that account, Williams was in a dangerous situation—just not as dangerous as he later claimed.

Just about everyone at NBC is mum. But “Meet the Press” moderator Chuck Todd, in an interview with columnist Matt Lewis, said:  “I know he’s mortified by this and even more mortified because veterans are so––I mean, the last group of people he wants to offend are veterans, and that’s, you know, stinging him the most.”