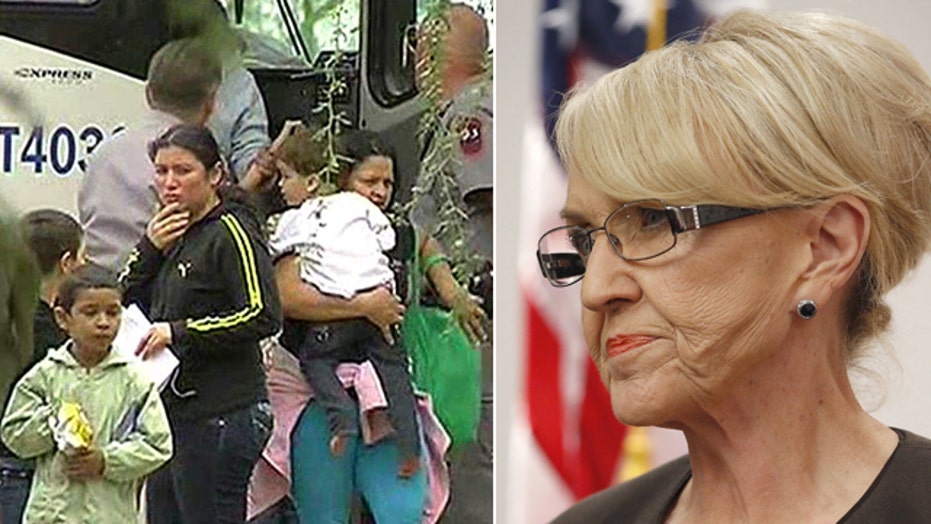 Outrage in Arizona over illegal immigrants dumped in state

Undocumented immigrants bused over from Texas by federal agents

Arizona Gov. Jan Brewer is urging President Obama to put a stop to the "dangerous and unconscionable" practice of shipping illegal immigrants out of Texas and dumping them in her state.

After reports first surfaced last week that scores of illegal immigrants in Texas were being flown, bused and then abandoned out of state in Arizona and elsewhere, Brewer sent a scathing letter to the president posing a string of questions about the policy.

Urging the president ultimately to end the program, Brewer complained her administration was never notified by the federal government and only learned about the practice from the media.

"This unwarranted operation is another disturbing example of a deliberate failure to enforce border security policies and repair a broken immigration system," she wrote.

Brewer, in her letter, voiced the concerns that both sides of the aisle have aired about the practice -- that it not only burdens states like Arizona but raises humanitarian concerns. She noted reports that many of those being released are women and children, and that they are being abandoned without food or water.

"I remind you that the daytime temperatures in Arizona during this time of year are regularly more than 100 degrees," she wrote. "Consequently, this federal operation seems to place expediency over basic humanitarian concerns."

Meanwhile, Rep. Paul Gosar, R-Ariz., on Monday wrote to the leaders of the House Oversight and Government Reform Committee urging them to launch an official investigation into the practice.

The illegal immigrants in question come from Central America and have flooded into Texas via the Rio Grande Valley.

The number of apprehensions in the Rio Grande Valley has shot up in recent years, with south Texas now the main gateway for illegal immigration along the southwest border with Mexico.

More shockingly, some say, is the unprecedented surge of children making the more than 1,000-mile journey from Central America to the U.S.-Mexico border to escape violence in their home countries.

To that end, Obama on Monday described the surge in children crossing the border as an "urgent humanitarian situation," appointing FEMA head Craig Fugate to lead an effort addressing the crisis. The White House is also seeking an additional $1.4 billion from Congress to deal with the influx.

Most of the families apprehended so far in Texas have been flown to Arizona and dropped off by the busload at stations in Phoenix and Tucson. They've also been sent to New York and Maryland.

Immigration and Customs Enforcement (ICE) said it does not want to lock up minors in detention centers or split up families.

Those sent to Arizona are expected to check in on their own once their deportation process nears completion in an honor system of sorts.

"After screening by DHS authorities, the family units will be released under supervision and required to report in to a local ICE office near their destination address within 15 days, where their cases will be managed in accordance with current ICE enforcement priorities," according to an ICE statement.