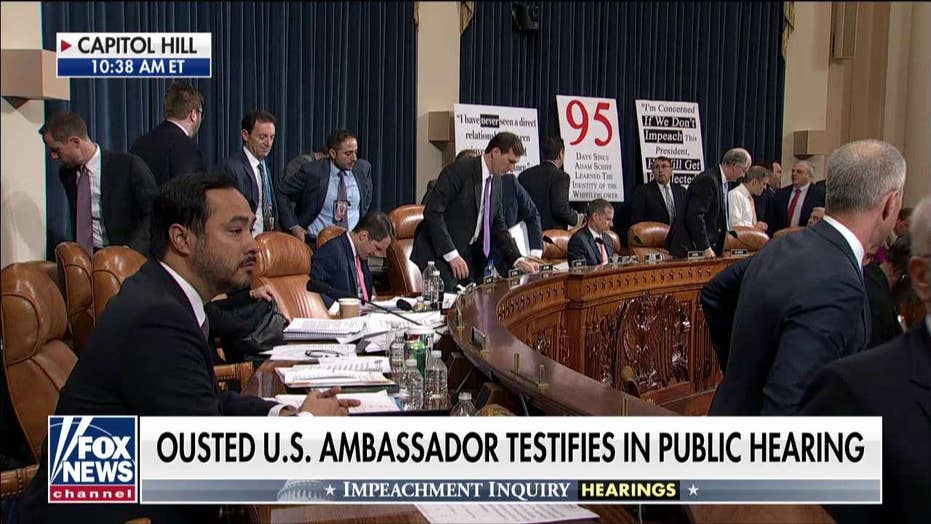 Yovanovitch, the former U.S. ambassador to Ukraine, pointed her finger at Trump lawyer Rudy Giuliani while detailing her sudden removal from her diplomatic post during Friday's nationally televised testimony.

During her appearance, Yovanovitch, a career diplomat who served both Republican and Democratic presidents, relayed her story of being suddenly recalled by Trump in May, saying she believes Giuliani played a key role in telling people she was not sufficiently supportive of the president.

She argued the efforts against her by the president's allies hindered her work.

Appearing on "America's Newsroom" with host Bill Hemmer, Baier said that he had started watching the hearing "thinking that Ambassador Yovanovitch was going to be a sympathetic witness."

"The Democrats would tell her story about how she was recalled," he said.

"But, as we noted, she serves at the pleasure of the president and I started to say that she didn't see the call. She didn't hear the call," he told Hemmer. "You know, this is tangential to the actual argument."

"However, this whole hearing turned on a dime when the president tweeted about her real-time," Baier stated.

He said that when Schiff stopped Democratic questioning to read the president's tweets and get her response, it enabled him to then "characterize that tweet as intimidating the witness or tampering with the witness, which is a crime."

"Everywhere Marie Yovanovitch went turned bad. She started off in Somalia, how did that go? Then fast forward to Ukraine, where the new Ukrainian President spoke unfavorably about her in my second phone call with him. It is a U.S. President’s absolute right to appoint ambassadors," the president wrote.

Adding: "They call it 'serving at the pleasure of the President.' The U.S. now has a very strong and powerful foreign policy, much different than proceeding administrations. It is called, quite simply, America First! With all of that, however, I have done FAR more for Ukraine than O."

Trump’s comments ignited an outcry from Democrats: Schiff read Trump's anti-Yovanovitch tweet during the hearing, and called it “witness intimidation.”

"Adding, essentially, an article of impeachment real-time as this hearing is going on," Baier explained. "That changed this entire dynamic of this first part of this hearing and Republicans now are going to have to take the rest of this hearing to probably try to clean that up."