The Trump administration on Thursday touted its success on the border wall as construction approaches 400 miles -- fulfilling a central, if controversial, goal for President Trump’s first term in office.

“Today we can confidently say our border is more secure now than any time in our history,” acting Homeland Security Secretary Chad Wolf said in front of new construction in Texas.

The visit, coming days before Election Day, saw officials praise the president for his efforts in moving forward with the project -- which appears set to meet the goal set by the president of 450 miles built by the end of the year.

“Without the president’s vision and dedication we would not be here today to celebrate construction of nearly 400 miles of new state of the art border wall system,” Wolf said.

The wall was perhaps the most well-known, and divisive, of Trump’s 2016 promises. His promise to make Mexico pay for the construction has not been fulfilled, but the administration has pointed to increased cooperation with Mexico in the Migrant Protection Protocols (MPP) as paying dividends in dramatically reducing illegal immigration.

Opponents claimed the wall was unnecessary, cruel and even an environmental hazard. The project faced fierce opposition from Democrats in Congress, who refused to agree to funding -- a fight that resulted in a government shutdown.

Officials have said the wall plays a vital role in keeping the border secure, even if it is not a tool to solve the problem of illegal immigration by itself. Other tools, such as MPP (known as the “Remain-in-Mexico” policy), which returns migrants to Mexico to await their immigration hearings, have been credited with reducing numbers at the border by cutting down on pull factors.

Immigration has not been front and center in the 2020 campaign, but the administration and the Trump campaign have sought to draw attention to it in recent weeks, both touting the successes in reducing migrant flows, and drawing a contrast with Democratic nominee Joe Biden -- who has promised to end many of the current administration's policies.

Biden has pledged to end policies such as the Migrant Protection Protocols and has opposed the building of the wall. 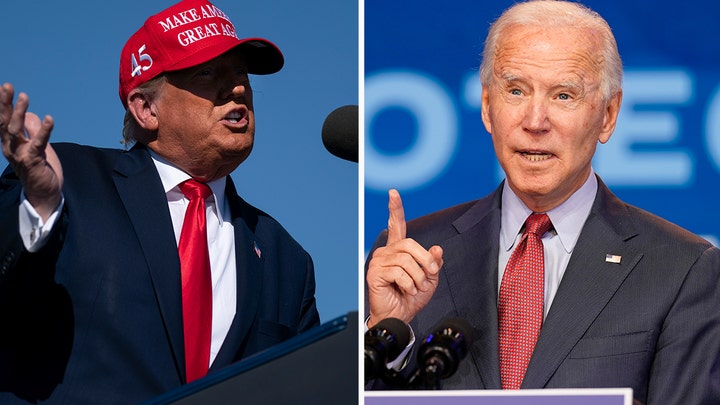 “His obsession with building a wall does nothing to address security challenges while costing taxpayers billions of dollars,” Biden’s campaign website says. “Most contraband comes in through our legal ports of entry.”

Wolf said that in FY 2019, DHS released nearly 500,000 individuals into the country, and in FY 2020 that number dropped by 90% to just 15,000. With a Centers for Disease Control and Prevention order that allows migrants to be removed under public health concerns amid the COVID-19 pandemic, Wolf said that authorities can return 90 percent of individuals to Mexico or home countries within just two hours.

The event marks a number of pushes on immigration by the administration. Immigration and Customs Enforcement (ICE) has held a number of press conferences, announcing operations targeting criminal illegal aliens. And on Wednesday, White House adviser Stephen Miller told reporters this week that Joe Biden would bring in “nationwide catch and release” if elected.