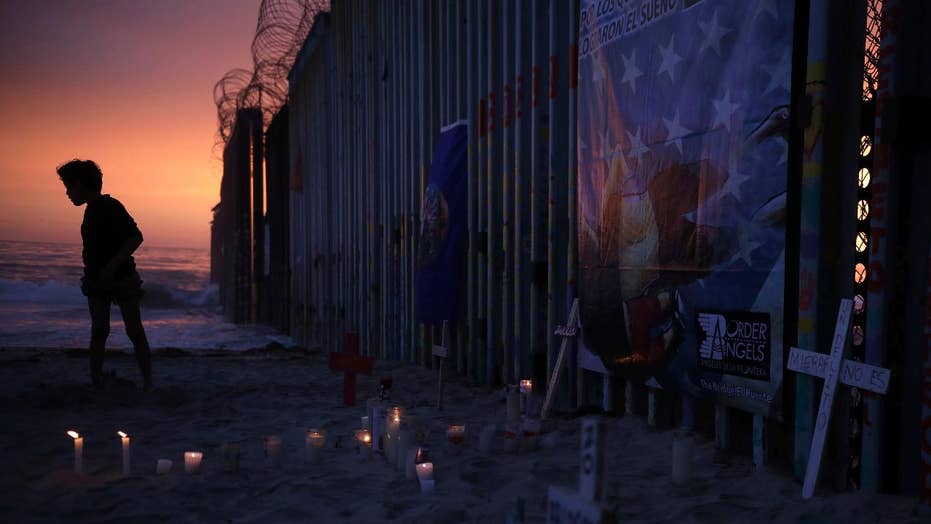 The Department of Homeland Security announced Tuesday that apprehensions at the southwest border plummeted in June after the Mexican government agreed early in the month -- under the threat of punishing U.S. tariffs -- to dramatically step up its own immigration enforcement efforts.

U.S. Customs and Border Protection (CBP) data showed a 28 percent drop in apprehensions from May, when 144,278 individuals were detained. Although some analysts blamed the "summer heat" for part of the new decline, the Trump administration noted in a statement that the decline in apprehensions "outpaces last year’s decline by 11 percent" in the same period.

The numbers refer to would-be immigrants caught trying to illegally cross the border, and not migrants who approach ports of entry.

The reduction in apprehensions "accounts for decreases across all demographics, including unaccompanied minors, family units and single adults, as well as decreases in migrants from all Northern Triangle countries, particularly those coming from Guatemala," DHS said in a statement.

"Decreasing apprehension numbers will provide greater opportunities for the DHS to address capacity challenges for those in custody and speed the movement of unaccompanied children into Health and Human Services (HHS) care," the statement continued.

Law enforcement and administration officials said President Trump's hard push for the deal with Mexico had made all the difference. Deputy Commissioner for U.S. Customs and Border Protection Robert Perez told Fox News' "America's Newsroom" on Tuesday that morale among law enforcement at the border had increased.

"I think it's a combination of a few things," Perez said. "I think it certainly is an unprecedented agreement that we've made with Mexico, that the president was able to secure about a month ago. We are definitely seeing and are encouraged by the steps Mexico has taken."

Some Republicans, however, were not pleaded with Mexico's efforts. Texas GOP Rep. Dan Crenshaw wrote on Twitter that it was "unacceptable" to see the fourth straight month of more than 100,000 border arrests, even though he praised the decrease in monthly apprehensions as a "good" sign.

"The President was right to demand more from Mexico," Crenshaw wrote. "Now some actions from Congress would be nice."

Earlier in June, Mexico committed to deploy thousands of National Guard troops throughout Mexico, including at its northern and southern land borders, as well as to increase actions to dismantle human trafficking operations and take extra steps to coordinate with the American government to share information and "better protect and secure our common border," according to a statement from the State Department.

Trump had taken a tough position toward Mexico just prior to that breakthrough, tweeting, "If we are unable to make the deal, Mexico will begin paying Tariffs at the 5% [sic] level ...!"

"On June 10th, the United States will impose a 5% [sic] Tariff on all goods coming into our Country from Mexico, until such time as illegal migrants coming through Mexico, and into our Country, STOP," Trump warned on May 30. "The Tariff will gradually increase until the Illegal Immigration problem is remedied, ... ..at which time the Tariffs will be removed. Details from the White House to follow."

Shortly after Trump's threat but before the deal was reached, Mexico's financial intelligence agency announced it had frozen the bank accounts of 26 people who it claimed to "have presumably participated in migrant smuggling and the organization of illegal migrant caravans."

MEXICO USING X-RAY TECHNOLOGY TO CRACK DOWN ON ILLEGAL MIGRANTS

The agency said it had detected money transfers from central Mexico to six Mexican border cities presumably related to the caravans.

And some 200 Mexican military police, immigration agents and federal police blocked the advance of about 1,000 Central American migrants who were walking north along a highway in the southern part of the country.

"We are definitely seeing and are encouragd by the steps Mexico has taken."

The group of migrants, including many women and children, set out early from Ciudad Hidalgo at the Mexico-Guatemala border and was headed for Tapachula, the principal city in the region. State and local police accompanied the caravan. The officials blocked the highway near the community of Metapa, about 11 miles from Tapachula.

And this week, it emerged that while the Mexican National Guard deploys to places like Tapachula on the country's southern border and makes changes to its asylum protocol, agents with the country's National Migration Institute (INM) are using a giant X-ray to find migrants being smuggled into the country in trucks.

Mexican officials said they caught more than 200 migrants hidden in trucks the last two days, using X-rays to see the people hidden inside.

The Mexican security ministry also said it found 228 migrants in a routine search of a soft drink transportation truck in one of its southern states on Monday.