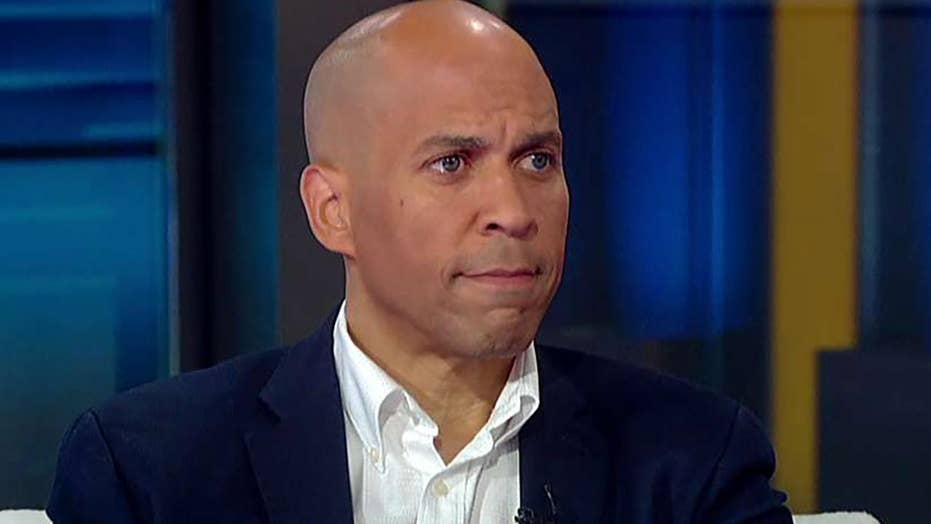 Sen. Cory Booker on Trump impeachment inquiry: This is not a gleeful moment, this is very sad

The Democrat from New Jersey also termed “the revelations” from the whistleblower in the Ukraine controversy “explosive.”

But Booker emphasized that even though “we are in a constitutionally challenging moment” with an impeachment inquiry in Congress underway, he didn’t believe the White House race would become all about the Trump presidency.

Booker spoke with reporters following a campaign event in the first-in-the-nation presidential primary state of New Hampshire soon after an unclassified version of the complaint by an intelligence community whistleblower was released by the House Intelligence Committee on Thursday morning.

The unidentified whistleblower claimed that White House officials who listened to the call in July between the president and Ukrainian leader Volodymyr Zelensky were "deeply disturbed" by Trump's requests that Zelensky investigate unsubstantiated allegations against Democratic presidential candidate Joe Biden.

Biden’s son, Hunter, served on the board of a Ukrainian natural gas company owned by one of the country’s oligarchs while Biden served in then-President Obama’s administration. The then-vice president pushed in 2016 for the dismissal of a Ukrainian prosecutor who was looking into corruption at that company. The prosecutor – who also had been widely accused of overlooking corruption in his own office – later was dismissed.

THE LATEST FROM FOX NEWS ON THE UKRAINE CONTROVERSY

The president on Thursday called the whistleblower report “another fake news story” and “another witch hunt” by the Democrats.

Booker claimed that the president was using “the highest office in the land.. for his own personal political agenda” and emphasized that “we are seeing evidence of that in this whistleblower report.”

And he spotlighted that “clearly there's more work to be done. There needs to be a thorough investigation.”

An optimistic Booker predicted that the Republican-controlled Senate “will investigate as well…there’s already been shown some good bipartisan efforts to get to the truth.”

But Booker – while acknowledging that “there’s gonna be a lot of wind sucked off the sails” – added, “do not underestimate the ability for us to get things done in Washington when…we start to build relationships to get things done.”

Booker, emphasizing that the presidential election needed to be more than just about Trump, told Fox News “Americans are far more sophisticated… the United States is in peril, because of corruption. But we can also deal with other issues.”

Tara Prindiville contributed to this report.