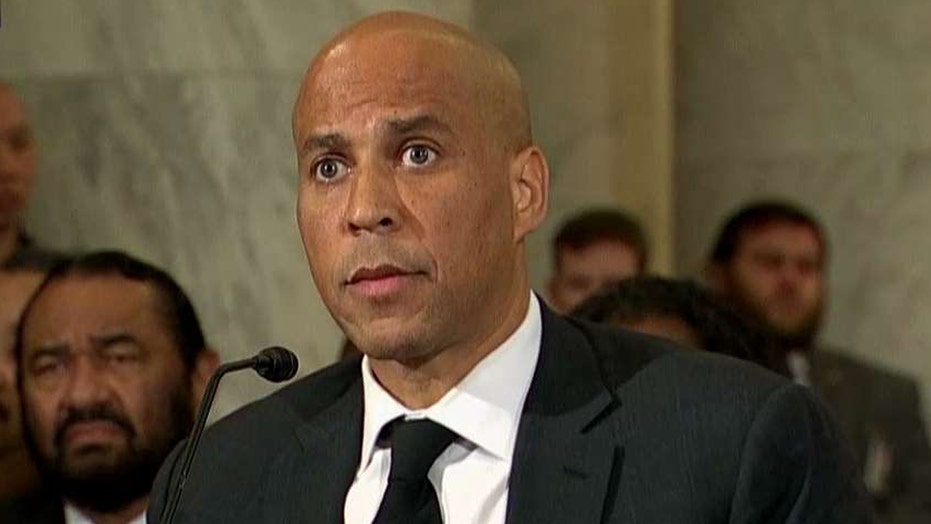 Democratic senator acknowledges he is breaking with Senate norms, says President-elect Trump's pick has not aggressively pursued civil rights, justice for all

Democratic Sen. Cory Booker cast aside long-standing precedent Wednesday and testified against a sitting Senate colleague, as he urged the chamber not to confirm Jeff Sessions for attorney general – a move that earned him a rebuke from Republicans.

Critics charged the New Jersey senator was merely burnishing his credentials for a presidential run, with Sen. Tom Cotton, R-Ark., writing on Facebook he was “disappointed” Booker “has chosen to start his 2020 presidential campaign by testifying against Senator Sessions.”

According to the Senate historian, no sitting senator has ever testified against a colleague at a Cabinet nomination hearing. Cotton said Booker “knows better” than to use the hearing as a “platform for his presidential aspirations.”

The first-term senator countered in his testimony that Senate traditions were not the priority here.

"I believe, like perhaps all of my colleagues, that in the choice between standing with Senate norms or standing up for what my conscience tells me is best for our country, I will always choose conscience and country," Booker told the Senate Judiciary Committee.

Testifying during the second day of Sessions’ confirmation hearing, Booker charged that his colleague is incapable of fulfilling the responsibilities of the office of attorney general.

“Senator Sessions has not demonstrated a commitment to a central requisite of the job [of attorney general] -- to aggressively pursue the congressional mandate of civil rights, equal rights and justice for all of our citizens,” Booker said.

The senator asserted that at times during his career Sessions has “demonstrated a hostility toward these convictions.”

Ever since President-elect Donald Trump nominated him to the AG post, Sessions has been battling efforts to revive allegations of past racist comments which helped derail his failed 1986 nomination for a federal judgeship.

Sessions, however, adamantly denied claims of harboring racial animus during the opening day of the hearing Tuesday. He decried the “false charges” and said critics were painting a “caricature” of him.

Jeff Giertz, Booker’s communications director, confirmed to FoxNews.com that the senator “attended parts of yesterday’s Judiciary hearing in-person and watched the hearing throughout the day when he wasn’t able to be in the room.”

Though Booker, a former Newark mayor, came out against a Senate colleague just three-plus years into his term, Democrats came to Booker’s defense -- suggesting his break with tradition pales in comparison to Republican tactics.

“He is taking a stand and is doing so fully recognizing that a lot of his Republican colleagues will be upset. Republicans did not think much of discretion and deference when they refused to give [Obama Supreme Court nominee] Merrick Garland a hearing,” Jim Manley, a former spokesman for ex-Senate Democratic Leader Harry Reid, told FoxNews.com.

Cotton answered Booker’s testimony on Twitter Wednesday afternoon, by joking that his “attacks on Jeff Sessions are so far-fetched I half-expected his make-believe friend T-Bone to be next witness.”

T-Bone is a reference to an individual Booker frequently claimed over the years had threatened his life when he was mayor of Newark. It came to light during his campaign for the Senate that T-Bone was not an actual person.

South Carolina Republican Sen. Tim Scott, the only other black member of the Senate, gently chided Booker for his appearance Wednesday.

“I have always respected Senator Booker as a colleague. This is not a decision I would have made,” he said in a statement to FoxNews.com.

Booker’s comments Wednesday stand in contrast to remarks he made less than a year ago.

“I feel blessed and honored to have partnered with Senator Sessions in being the Senate sponsors of this important award,” Booker said of his collaboration with Sessions on a bill honoring participants of the Selma civil rights marches with the Congressional Gold Medal.