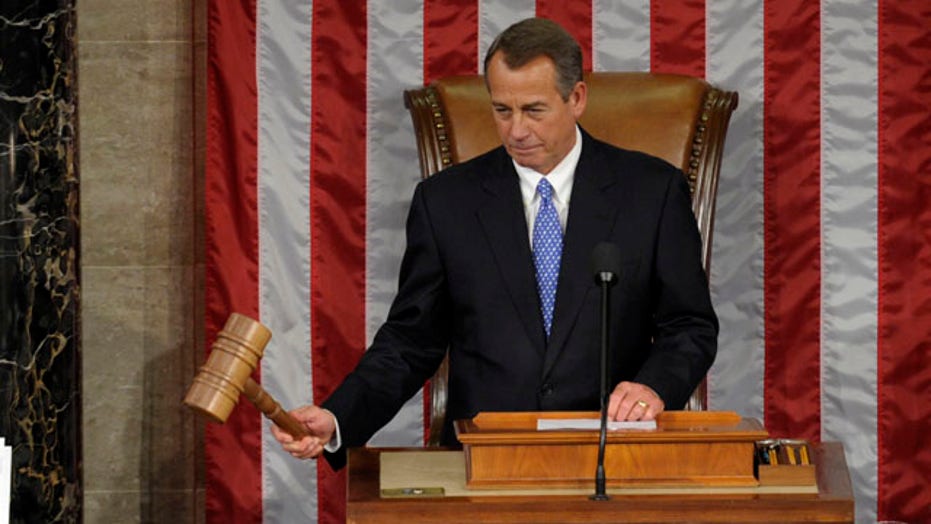 Boehner to keep his gavel for two more years

John Boehner's first order of business in his second term as speaker is no more one-on-one meetings with President Obama.

An aide to the speaker, who won re-election to the leadership post Thursday afternoon, confirmed to Fox News that Boehner is done with closed-door talks with the president.

Boehner and Obama over the past two years have made two unsuccessful attempts at striking a "grand bargain" deficit-reduction deal. The last set of talks, in the context of crafting a bill to avert the fiscal crisis, ended with Boehner exiting the negotiations and pushing a failed "Plan B" and then being forced to bring a Senate-passed bill to the floor. Though the bill passed the House, Republicans largely opposed it.

Going forward, Boehner spokesman Michael Steel said, "he is recommitting himself and the House to what we've done, which is working through regular order and letting the House work its will."

The confirmation of the new approach came as Boehner was chosen again as speaker despite misgivings by some conservatives about his handling of the fiscal crisis negotiations.

Boehner, whose election marked the start of the 113th Congress, now will lead a chamber that looks a lot like it did two years ago, with Republicans holding a comfortable majority -- but with divisions showing within the GOP caucus.

On the Senate side, majority Democrats start the session with two additional seats.

In reclaiming the gavel, Boehner called on Congress to act urgently on the nation's debt crisis. "The American dream is in peril," Boehner said, referring to the $16.4 trillion debt. "It's wrong to pass this debt on to our kids and our grandkids."

The new Congress faces a lengthy to-do list, in large part because the last session was so unproductive. Lawmakers, in striking the fiscal crisis deal, put off until 2013 a debate over entitlement and tax reform. Immigration, gun control and other domestic policy issues are also expected to surface early in the term.

Boehner, now in his 12th term as an Ohio congressman, was re-elected Thursday with 220 votes. He endured nine defections from the Republican ranks but was able to just clear the 214-vote threshold he needed to avoid a second round of balloting.

One such defector was freshmen Rep. Thomas Massie, R-Ky., who told Fox News he voted for Rep. Justin Amash, R-Mich., over Boehner. However Massie says he has no animosity towards the speaker, and is not worried over potential fallout from his vote.

"It’s not something that I worried about," Massie said. "I came here not to get along with all of the people here."

Divisions within the Republican caucus were on full display in the final weeks of the lame-duck session, leading up to Thursday's vote.

Conservatives were disappointed that Boehner, early on in talks over the fiscal crisis, agreed to new revenue. Boehner suffered another blow two weeks ago when his "Plan B" fiscal bill failed to garner enough Republican backers. But the final fiscal-crisis bill, which arrived from the Senate early Tuesday morning, ultimately garnered thin support from the GOP ranks.

Boehner then drew the ire of New York-area lawmakers on both sides of the aisle after a decision to postpone a vote on aid for Superstorm Sandy victims -- he assuaged the concerns of his colleagues late Wednesday with a commitment to bring the aid up for a vote in two installments over the next couple weeks.

Amid the angst, a draft plan had supposedly been circulating on Capitol Hill laying out a possible path for challenging Boehner -- which included depriving him of a majority and forcing the vote into multiple rounds. And Fox News learned at least 25 House members were expressing reservations.

But only some of them voted against the speaker, or abstained, on Thursday. The defections included three votes for House Republican Leader Eric Cantor.

House Democratic Leader Nancy Pelosi, the only other declared candidate besides Boehner, got 192 votes -- five Democrats defected and did not support her.

Some on Capitol Hill, in both parties, were stoking the idea Wednesday that there was a rift emerging in the GOP leadership.

Rep. Peter King, R-N.Y., claimed a day earlier that Boehner and Cantor, who opposed the fiscal package Tuesday, were not on speaking terms. He said Cantor, who apparently had been pushing for a vote on the Sandy aid bill, did not find out about Boehner's decision to scratch it until Boehner's staff informed Republican lawmakers, who then told Cantor.

Cantor's office voiced support for Boehner in a statement Wednesday to Fox News.

"They remain in contact and have meetings together today. The Majority Leader supports the Speaker," Cantor's office said in a statement.