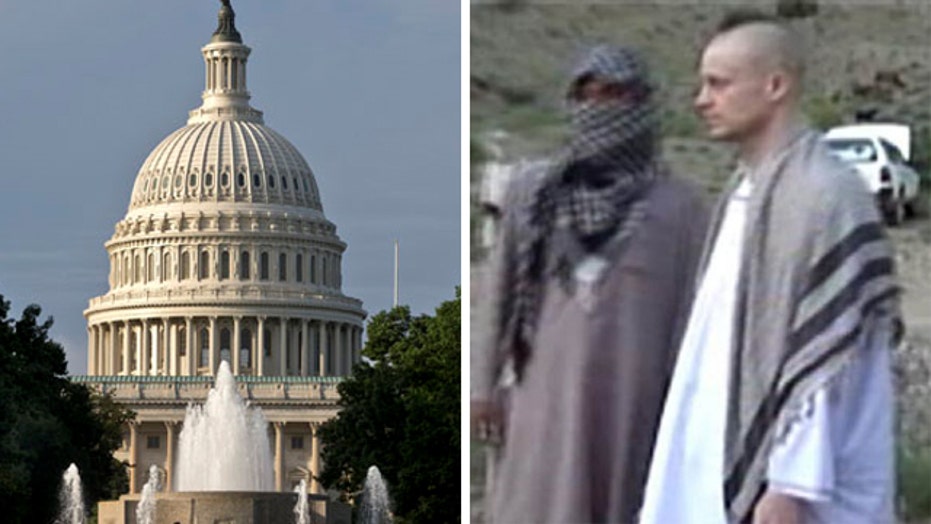 Republican and Democratic lawmakers say they should have been consulted

Top congressional leaders were briefed more than two years ago about the possible exchange of five Guantanamo prisoners for American soldier Sgt. Bowe Bergdahl, but raised "serious" concerns from the outset about the risks of such a trade, officials say.

House Speaker John Boehner and others provided new details Tuesday about the prior deliberations, and voiced grave concern that the administration charged ahead with the prisoner swap over the weekend without Congress' approval.

Boehner, who called for hearings on the decision, said the administration "never satisfactorily answered" lawmakers' questions and concerns that surfaced from the beginning about the proposed trade. Further, Boehner alleged that the only reason the administration failed to notify Congress is "the administration knew it faced serious and sober bipartisan concern and opposition."

"The administration has invited serious questions into how this exchange went down," Boehner said in a statement.

The details emerge as the Obama administration tries to cool a growing bipartisan storm on Capitol Hill. Lawmakers from both parties are voicing frustration that the White House and Pentagon did not adhere to a 2013 law requiring a 30-day notice for any transfer of Guantanamo inmates, before freeing five senior Taliban leaders.

"It's very disappointing there was not a level of trust to tell us," Sen. Dianne Feinstein, D-Calif., chairwoman of the Senate Intelligence Committee, said Tuesday. She said the law was not followed and should have been.

Feinstein said Deputy National Security Adviser Tony Blinken called her Monday night to apologize for not telling Congress. She claimed Blinken essentially conceded it was an "oversight" that the administration did not appropriately tip off Congress about the swap.

Administration statements, though, make clear that the decision not to notify Congress was deliberate. White House Press Secretary Jay Carney said Monday that telling Congress was "not an option."

National Security Council spokeswoman Caitlin Hayden said Tuesday that the administration had determined that the 30-day requirement does not need to apply "to this unique set of circumstances," in which providing notice "could endanger the soldier's life."

But Boehner made clear that lawmakers had expected the administration to brief them again before proceeding.

"There was every expectation that the administration would re-engage with Congress," he said.

House Republican aides told Fox News that Boehner and other figures from key committees were given high-level briefings by the administration about a possible trade for Bergdahl in late 2011 and early 2012. There was discussion about trading five Guantanamo detainees, though it's unclear whether they were the same hardened Taliban leaders who were ultimately freed in exchange for Bergdahl over the weekend.

At the time of the first briefing, aides said, Boehner and others raised questions about the idea -- and wrote a letter to Obama asking questions about the precedent for such an exchange and whether other military personnel could be taken as hostages.

After a second briefing, Fox News is told, lawmakers continued to voice the same concerns.

A House GOP aide said that on Saturday, the Defense Department contacted a congressional aide just before noon and acknowledged that their actions were inconsistent with the law.